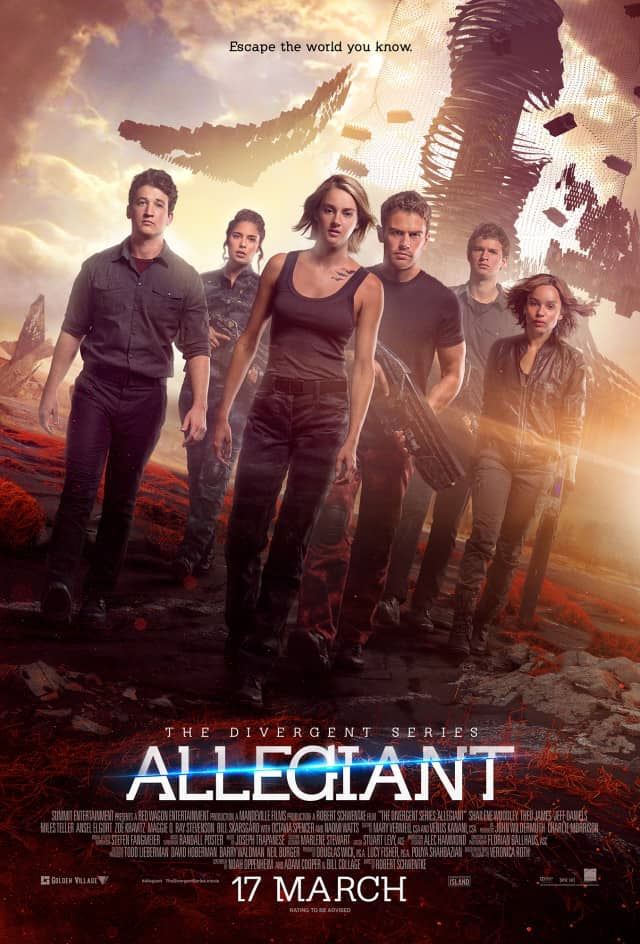 As with the trend of other successful film franchises adapted from tween/young adult novel series, like Harry Potter, Twilight and The Hunger Games, the concluding chapter to the Divergent series by Veronica Roth has been split into two films. The first half, titled Allegiant, picks up shortly after the events of the last film Insurgent, where Tris Prior (Woodley) opened the mysterious box locked by the five SIMs of the five Factions and released a video that revealed the truth that the walled city of Chicago and its faction system is actually an experiment, that the Divergents are actually the success of the experiment, and that the world is waiting outside for them to return to humanity beyond the walls.

Having killed off the previous villainess Jeanine Matthews (Kate Winslet) at the end of the last film, against the advice of Tris and her son Tobias “Four” Eaton (James), Factionless leader Evelyn Johnson-Eaton (Naomi Watts) took the opportunity to appoint herself as the leader of the city and enforced martial law to continue locking the citizens within the walls, forcing them to operate under her command and live as equal and Factionless citizens. 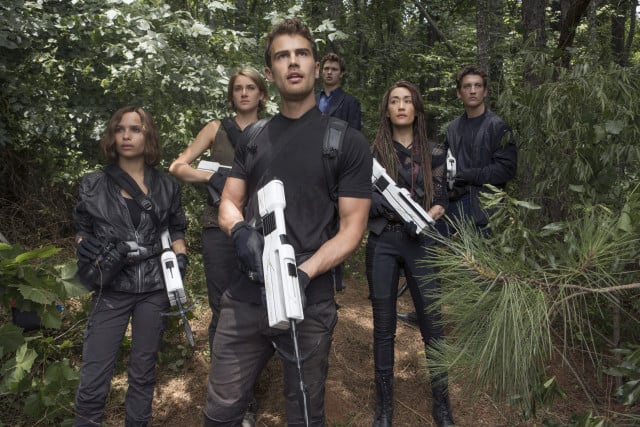 Hopeful to find the peaceful solution for their chaotic city beyond the walls, Tris and Four, together with their friends Christina (Kravitz) and Tori Wu (Q), Tris’ brother Caleb (Elgort), as well as the duplicitous Peter Hayes (Teller) scaled and broke out of the electrified boundaries of Chicago.

Once outside the walls, the group found themselves stranded in a red, barren and toxic wasteland, called The Fringe, not unlike that of the Mad Max landscape, so much so that you would be forgiven if you thought the cast had got lost and ended up on the wrong film set where Tom Hardy and Charlize Theron would probably be popping up at any moment. Not. But I digress.

Anyway, back to the story, not long after their escape, the group is soon on the run again, with Edgar (Weston) and his Factionless legion hot on their tails, under the order of Evelyn to apprehend and bring them back to Chicago. The capture was thwarted when militant representatives of the Bureau of Genetic Welfare intercepted the chase, rescued Tris and her gang and brought them to their hi-tech antiseptic world hidden behind an invisible wall. 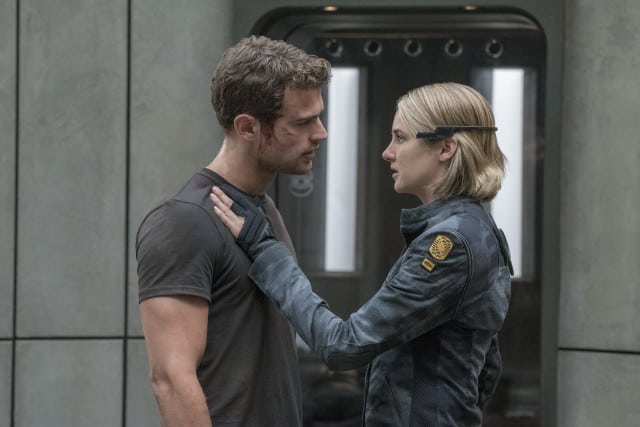 As it turns out, everyone in this whole new world has been watching Tris, Four and everyone within the confines of the experimental city of Chicago live on television, a la The Truman Show, The Hunger Games or any of those reality series that we have guiltily been fans of. And just like the winners of The Hunger Games or the Kardashians, Tris, Four and the rest of their gang are instant celebrities idolized by the masses when they make their first public appearance.

The biggest fan, especially of Tris, is their leader – the seemingly benevolent David (Daniels). Having tested and identified Tris to be the only pure Divergent, since Four’s genetic structure indicates that his genes are “damaged”, David hopes Tris will aid him in his quest to create a better society by using her DNA to modify peoples’ genes and raise enough genetically pure Divergent individuals to fix the “genetic damage” and create a pure race. As for the others, David relegates Caleb and Peter to espionage work, spying and reporting on the activities within Chicago, and Christina and Four to the military squad, tasked to carry out dangerous missions, whereby they are despatched to tented cities in the Fringe to, as they soon realized much to abduct children, supposedly for the purpose of memory erasure and genetic experimentation.

Upon this shocking discovery, Four tries to alert Tris about the far from honourable intentions of the smiling Tiger who is David, but Tris intent on going along with David’s plans, so as to meet up with the Bureau’s council leaders and convince them to rescue the trapped citizens in Chicago, was too blinded with her noble ambitions to heed Four’s advice. 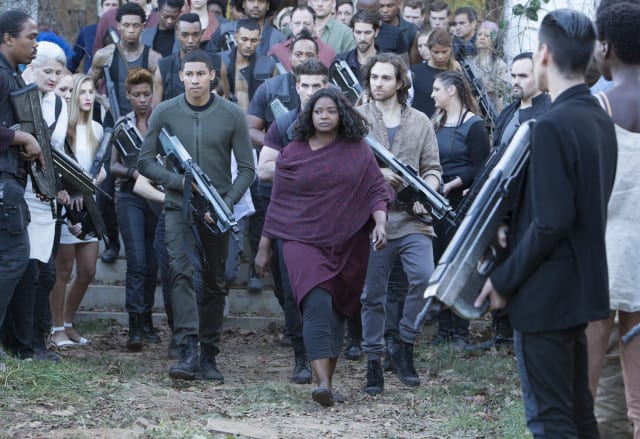 In the meantime, back in Chicago, unable to convince Johanna Reyes (Spencer) and the people of Amity and other Factions to support her in her leadership of Chicago, finally reluctantly resorts to accepting the unscrupulous strategy, suggested by David, to wipe out the memories and personalities of all those who opposes her and the Factionless in the city, with a memory serum. Little does she realize that the serum will affect her and her Factionless community as well!

Will Tris finally see the true colours of David before it is too late? Will Evelyn sacrifice herself and her Factionless people in her quest to overthrow Johanna and the rest of the Faction communities of Chicago? By this point, do the audience even care?

Between the three instalments so far, Allegiant proves to be the weakest link, with its disjointed story progression, its meandering pace and lacklustre execution. If the earlier two films felt parallel to The Hunger Games, this third film proves to be such a failure that even Suzanne Collins, the author of The Hunger Games, would probably be embarrassed that this may have been inspired by and ripped off from her book series. 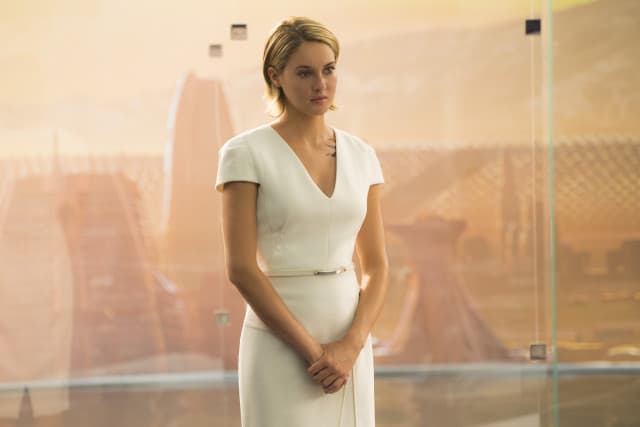 While she may have been dauntless and impressive as a badass action heroine in the first two films, even with her best efforts, Woodley could not have lifted this third film from mediocrity. Gone not only are Tris’ dark-coloured pant suits, in place of a white dress befitting of her pure Divergent status. And with her change of wardrobe, so too marked an overhaul in her personality, instead of being tortured, angst-filled, volatile and rebellious, we are suddenly faced with a self-righteous, peace-loving and vanilla-ish Tris, who ludicrously also swaps her shrewdness for naivety, trusting everything that the manipulative David tells her. So although most film characters progresses in character development with each successive film in most film series, sadly here our lead character noticeably takes a step backwards.

As for the new antagonist in this film David, sorry Daniels, but Winslet left him big shoes to fill and unfortunately he did not fill them. While Winslet was charismatic in her delivery of the immaculately gorgeous villainess that we loved to hate, Daniels simply lacks the magnetism and viciousness that his screen baddie so badly needed. It was almost as if he was re-enacting the same role he did in The Martian but in a different film setting. Not much of a surprise there, Winslet is after all an Oscar winner and multi-nominee, while Daniels has nary an Academy Awards nomination to his name. 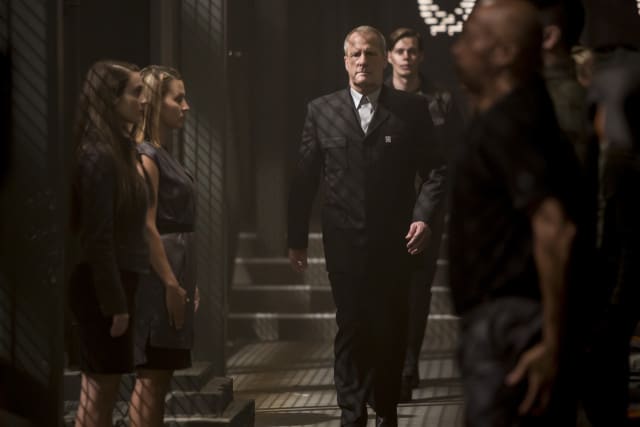 Perhaps the bulk of the film’s budget was spent on recreating the red, toxic wasteland Mad-Max-ish look and the futuristic infrastructure of the hi-tech Oblivion-ish new world, or perhaps this film franchise just thrives on “paying homage” to other films, hence the climatic finale ended up looking like it was directly lifted from 1989’s Batman, where Jack Nicholson as the Joker attempted to poison the whole of Gotham City with green toxic fumes, but here in Allegiant, they used orange fumes instead as the gas created from the memory erasing serum. The end result looked cheap, anti-climactic and even laughable, especially since that plot device was used almost three decades ago, and was not exactly terrifying even back then, much less now.

As a build-up to the finale to The Divergent Series: Ascendant that will be released in 2017, Allegiant dismally fails to sustain or heighten any excitement that may have been created by the previous two films. Fans of the novel and film series may be interested to catch this to find out what happens next after Insurgent and before Ascendant, but even so, be prepared for a bore fest.

Summary: If there was any doubt before, Allegiant is now proof that The Divergent Series is nothing more than an inferior rip-off to The Hunger Games. Even fans of the previous two films should give this a miss and just wait for the finale The Divergent Series: Ascendant.