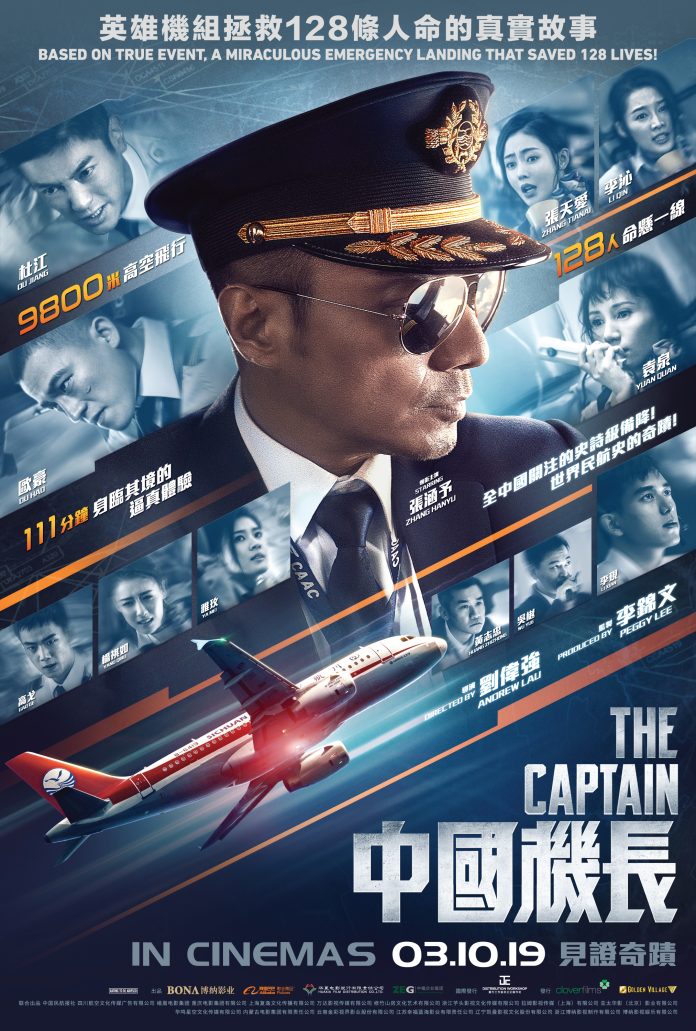 The Low-Down: Based on the true event where Sichuan Airlines pilot Li Zhangjian and flight crew managed to save 119 passengers onboard 3U8633 by an emergency landing in Chongqing, The Captain is packed with intense sequences that will keep you gasping and holding your breath. Hong Kong veteran director Andrew Lau Wai-keung and crew use claustrophobic shots, masterfully balanced practical and visual effects, and tight transitions to keep the suspense going — viewers will feel as if they’re experiencing the actual flight as a passenger.

The Story: Military-turned-commercial-pilot Captain Li (Zhang Hanyu) is on duty to fly 3U8633 to Tibet alongside co-pilot Captain Zhang (Du Jiang) and First-Officer Xu (Ou Hao). While ascending into the air, a mechanical failure combined with unusual air pressure breaks the cockpit’s windscreen. Li has to land the plane in Chongqing but is faced with towering mountains, panicking passengers, and dwindling oxygen supply. But those are not his biggest worry until he has to steer the plane through a massive lightning storm… with faulty controls.

The Good: When The Captain flexes its technical muscles, almost everything from the violent yet realistic rocking of the plane cabin and its CGI exterior gliding through the dark clouds and lightning bolts, to the tight shots, punchy editing and believable physics, is on point. Most of all, you don’t doubt the possibility of a stoic and coolheaded pilot like Captain Li commandeering the plane and its passengers to safety. It might not be the best plane movie or boast the flashiest visual effects, but it comes pretty close among other Chinese movies of its kind.

The Not-So-Good: At several parts of the flight, there are moments that don’t fit in — weird shots of the plane’s cabin interior in between a sequence of Captain Li steering the plane through the storm, close-ups on a character clasping onto her ring but no mentions of her spouse, among many more. They feel as if like small ideas that Lau and crew had but they never got to revisit them when the reel got into the editing room.

Aviophobia: Some aviophobic viewers might worry they would leave the cinema more scared than ever to board a plane again — it’s a movie about a plane nearly going down, anyway. On the contrary, if you watch The Captain, you’ll come to understand how many people from different faculties (air control, military airbases, among others) work together to make sure a plane leaves and arrives at its destination safely. A damn good pilot alone is no good without the help and cooperation of dozens (or even hundreds).

Lives Of Flight Crew: Except for a few unnecessary shots, the entire ride from lift-off to emergency landing is more than just nerve-racking sequences of the flying sheet of metal getting messed up by turbulence and a broken windshield — you learn to sympathise with the flight crew. You begin to understand how much it takes to get a plane full of passengers safely into the air and back on the ground.

Recommended? Yes, especially for flight enthusiasts. Although the character writing and dialogue are quite clunky, the action and visual spectacle make up for that. Be prepared because you’ll be kept on the edge of your seat for the whole ride, feeling the exhilaration as if you were there (without the danger).