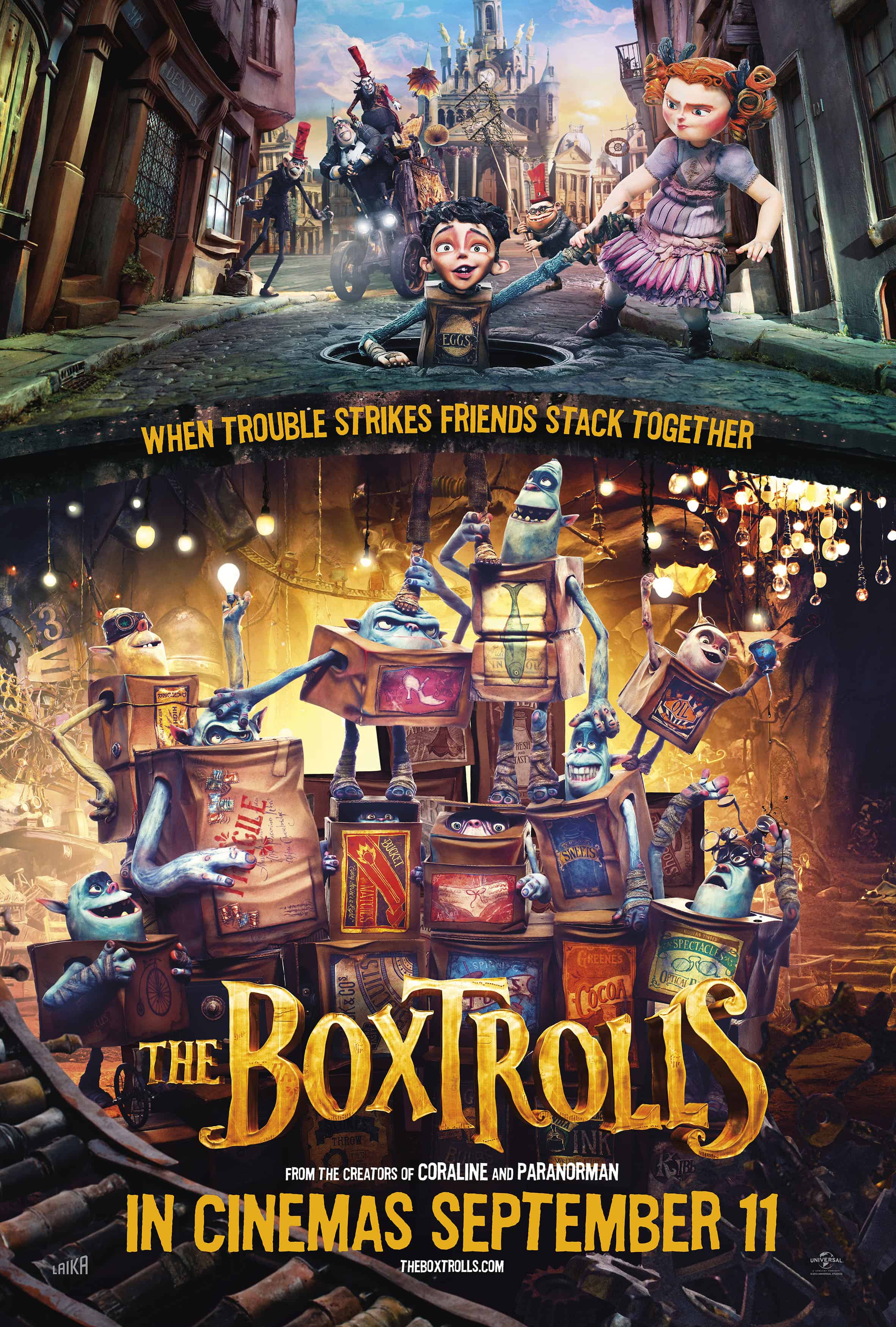 We know we’re not alone in mishearing the lyrics to Nirvana’s Smells Like Teen Spirit as “Here we are now, in containers”. Oregon-based animation studio Laika brings us the story of loveable, misunderstood beings – in containers. Evil, greedy pest exterminator Archibald Snatcher (Kingsley) misleads the residents of Cheesebridge into believing that they are plagued by subterranean baby-eating monsters called the Boxtrolls. The Boxtrolls, so named because they “wear” cardboard boxes, are really harmless tinkerers who collect discarded knick-knacks to build their own amusing doodads. The Boxtrolls raise a baby, whom they name “Eggs” (Hempstead-Wright), as one of their own. An adolescent Eggs discovers the world above and has to learn how to fit in as a regular boy, the precocious Winnie Portley Rind (Fanning) becoming his friend and teacher. Eggs and Winnie have to convince the populace of Snatcher’s deception to save the Boxtrolls from being completely wiped out as Eggs learns how he came to be cared for by the Boxtrolls. 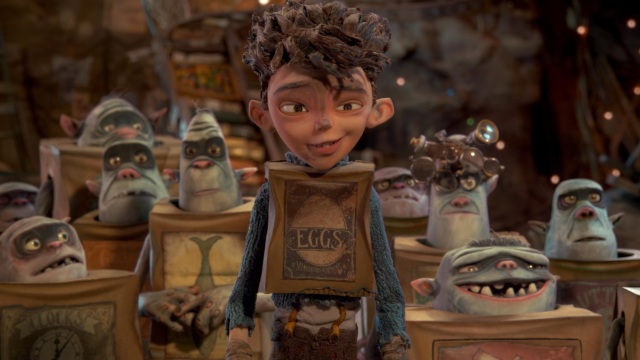 Based on Alan Snow’s fantasy novel Here Be Monsters!, The Boxtrolls is Laika’s third feature film, following Coraline and ParaNorman. Short of location-filming on the surface of the planet Venus, stop-motion animation has got to be the most painstaking way to make a movie ever. With every movement needing to be tactilely manipulated, every tiny costume hand-stitched, every minute prop machined, it’s easy to see why it’s not a commonly-seen form of animation in theatres today. While the stop-motion work in The Boxtrolls is enhanced with computer animation, everything still has that quaint handmade feel to it. The studio manages to marry the old-fashioned with the cutting-edge, using 3D-printed parts in their puppets. The effort and care taken to craft Cheesebridge, the Boxtrolls’ domain below and all the inhabitants within is readily apparent and is something moviegoers should cherish, standing in sharp contrast with the production-line feel of a film like Planes: Fire And Rescue. So, hats off to directors Graham Annable and Anthony Stacchi, lead animator (and Laika CEO) Travis Knight and all the artists and technicians involved. 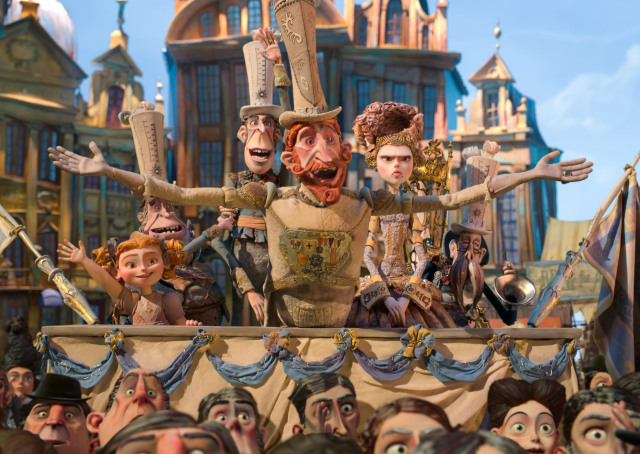 Just like the two films before it, Laika has wrangled a wonderful, predominantly British voice cast for The Boxtrolls. Hempstead-Wright, best known as Bran Stark on Game Of Thrones, plays Eggs as a sweet, amiable, slightly lost fish out of water – it’s a good performance, though there are times when he can sound a little stiff. Fanning is entertainingly headstrong and off-kilter as Winnie and follows in her older sister’s footsteps, Dakota Fanning having played the title role in Coraline. It is Kingsley, however, who truly steals the show with his rumbling, menacing turn as Archibald Snatcher. Combined with the grotesque character animation (that allergic reaction Snatcher has looks truly disgusting), Kingsley gives life to a vile, despicable villain who recalls the most memorable baddies from British children’s literature. The Child Catcher from the film and stage adaptation of Chitty Chitty Bang Bang seems to have been a major source of inspiration. Nick Frost and Richard Ayoade are expectedly comical as two philosophical lackeys, with Tracy Morgan as the demented third henchman. Also noteworthy are the veteran voice actors who provide the Boxtrolls’ vocalisations, including experienced animated monster/creature portrayers Steven Blum and Fred Tatasciore. 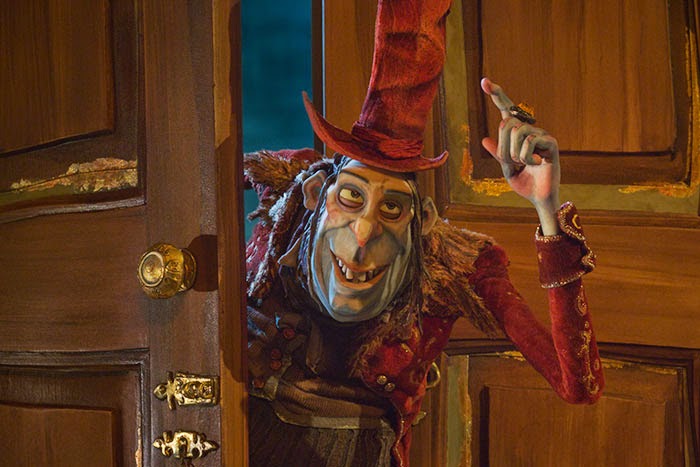 The message in The Boxtrolls is one we’ve seen before in family films – “different is good”. However, it is articulated in a sincere, charming manner here. The sweetness and fuzziness is balanced with gross-out moments that will have kids going “Eww – but yeah!” There’s also some social commentary, with the aristocrats in charge of running Cheesebridge deciding that a giant wheel of Brie is a better use of their money than a children’s hospital and with Snatcher hankering after a white top hat, a symbol of status and power. While it doesn’t quite reach the heights of visual invention that Coraline did and it is not as emotional and poignant as ParaNorman, that Laika magic is in full force in The Boxtrolls. Stick around for a mid-credits scene in which Mr. Trout (Frost) and Mr. Pickles (Ayoade) wax existential as the truth about the nature of their very being is revealed. 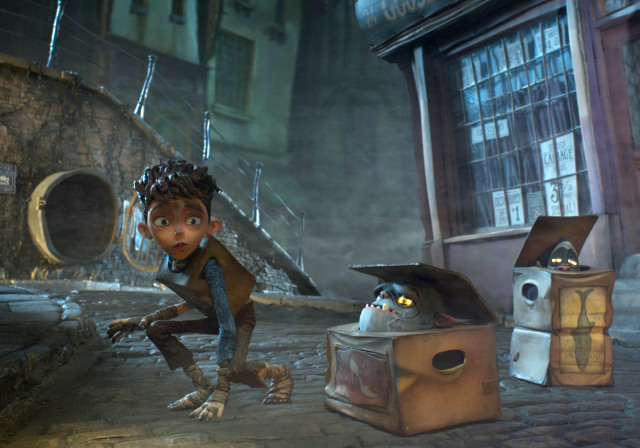 Summary: Laika keeps the flame of stop-motion animation burning bright with a warm, very funny, beautifully-crafted film, served with a side of the weird and gross.