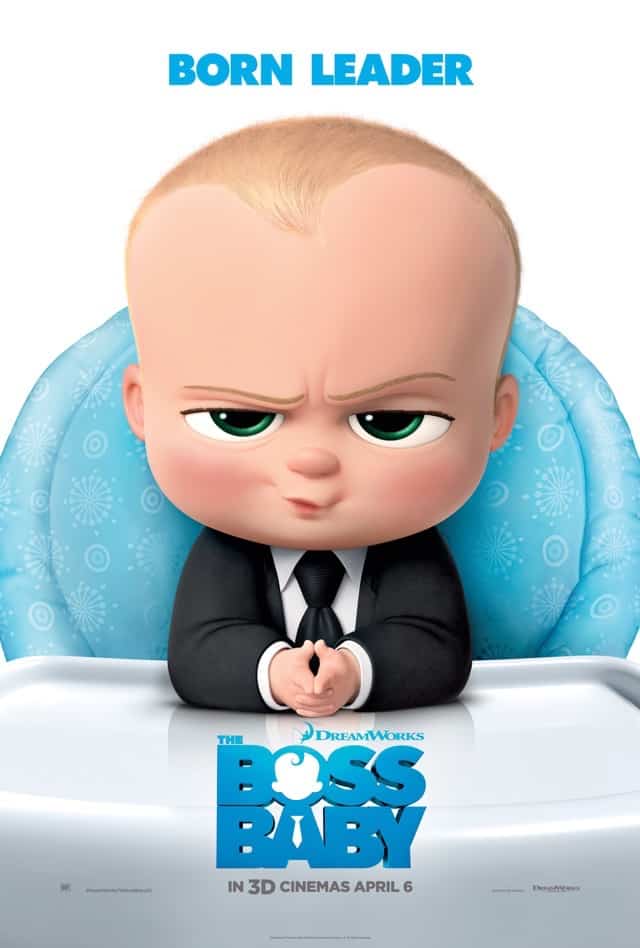 Alec Baldwin recently played the sitting President of the United States on Saturday Night Live. In this animated film, Baldwin plays a character who wears better-fitting suits, is more articulate, throws fewer tantrums, but has the same sized hands.

Virtually every review of The Boss Baby will open with or otherwise contain a passage just like the one above, but it’s just too difficult to pass up the comparison. Baldwin voices the title character, a corporate high flyer who just happens to be an infant. He is dispatched to the Templeton family by Baby Corp, after the love that babies in general are receiving is threatened by ever-cuter breeds of puppies. Mr. and Mrs. Templeton (Kimmel and Kudrow) work for Puppy Corp, so the Boss Baby attempts to infiltrate the company via his new parents. Seven-year-old Tim Templeton (Bakshi) has a feeling that something’s amiss with his new baby brother, and quickly discovers the Boss Baby’s secret. Even though they strongly dislike each other, Tim and the Boss Baby must cooperate to stop a dastardly scheme engineered by Puppy Corp’s CEO, Francis E. Francis (Buscemi).

The Boss Baby is directed by Tom McGrath, who directed Megamind, co-directed the Madagascar films and voiced Skipper the Penguin. Dreamworks Animation has built its brand as being more cynical and wiseacre than other studios that cater to children. The Shrek films were a vehicle for Dreamworks studio chief Jeffrey Katzenberg to express his spite towards Disney, his former place of employment. You get the occasional oddity like Bee Movie. There’s an expectation that there will be lots of pop culture references. Big-name stars are slotted in, regardless of whether they’re capable voice actors. The best Dreamworks films, like the two How to Train Your Dragon movies, are praised as being “Pixar-like”.

The fundamental problem with The Boss Baby is that this is a premise which some suits in a boardroom found amusing. Much of the humour is derived from the incongruity of an infant spouting business jargon, and that the Boss Baby salivates at the thought of a gleaming corner office in Baby Corp. This is not stuff that kids will connect to. In the meantime, the parents will be alienated by the typical bodily function gross-out jokes. Family-aimed animated films can package challenging themes in a palatable way, the example that springs to mind being the recent Oscar winner Zootopia. The Boss Baby doesn’t do this at all. The best animated films are easy to connect and get lost it, when it’s clear that The Boss Baby was the brainchild of a bored studio exec.

Even though the premise doesn’t work as a whole, there are individual parts of The Boss Baby that are entertaining. The animation is lively, and there’s an inventive stylistic flourish in how Tim’s overactive imagination is depicted in a simpler, more colourful animation style. There’s an unexpected grandeur to the soundtrack composed by Hans Zimmer and Steve Mazarro, which is influenced by the big band style. The Tim character is likeable and has adequate personality thanks to Bakshi’s performance. Baldwin also showcases keen comic timing, even though his turn as Santa Claus in Dreamworks’ Rise of the Guardians was more fun.

Buscemi, replacing the initially-cast Kevin Spacey, can play ‘weaselly’ in his sleep. It’s a fine performance, but nothing we haven’t heard from him before. Kimmel and Kudrow are serviceable but unremarkable as the Templeton parents. Weirdly enough, there isn’t a scene-stealing supporting character, when Dreamworks movies can often be counted upon to provide those.

Throwing the parents a bone in the form of a pop culture reference or two is fine, and can be amusing if done right. However, The Boss Baby has entire scenes built around homages to films that its target audience will not be familiar with, including a gag spoofing the opening of Raiders of the Lost Ark. There’s also the “cookies are for closers” line, a nod to “coffee is for closers” from Glengarry Glen Ross, in which Baldwin starred opposite Al Pacino and Jack Lemmon. These moments geared towards older audience members do not gel with the lowbrow humour, such that it’s not quite clear who exactly The Boss Baby is for.

While The Boss Baby can be viewed as a comically exaggerated allegory for sibling rivalry and it does get some moving moments in, cynicism is always bubbling beneath its talcum powdered skin.

Summary: An animated film with a half-clever premise, The Boss Baby’s corporate-themed plot will fly over the heads of most younger viewers, while the adults will barely tolerate the lowbrow gross-out jokes.