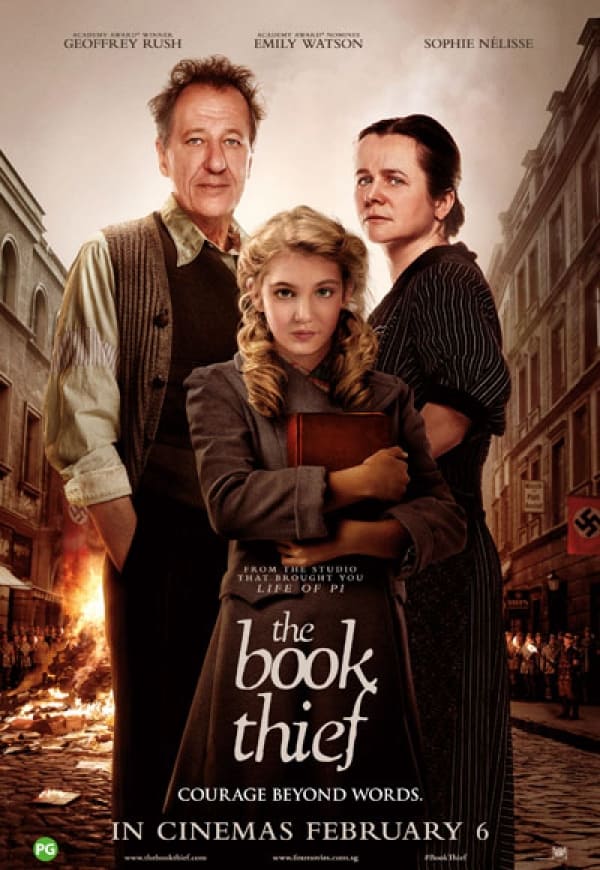 Many books have been deemed ‘unfilmable’ – but anyone who’s read Markus Zusak’s heartbreaking, thought-provoking The Book Thief would think it especially so. An often grim, unrelentingly dark and yet sadly uplifting novel about Nazi Germany in the throes of World War II – narrated by Death itself? Reviews for director Brian Percival’s lush, snow-swept movie adaptation have not been kind, suggesting that the book would have been better left alone. It’s true, of course, that Zusak’s story and characters suffer somewhat in leaving the page. But the film and its titular book thief nevertheless possess a bittersweet charm, buoyed by a host of unforgettable supporting characters.

As the clouds of war and death gather over Germany, Liesel Meminger (Sophie Nélisse) meets her new foster parents: kindly Hans (Geoffrey Rush) and the remarkably abrasive Rosa (Emily Watson). She tries to settle into her new home and school life, striking up a spiky friendship with kiss-hungry Rudy (Nico Liersch) and learning how to read by going through a macabre book about grave-digging with Hans. But, just as she’s starting to grow accustomed to her surroundings, Liesel’s life will soon change all the more, when Max (Ben Schnetzer), a young, hunted Jew, comes to stay.

As a film, The Book Thief works quite well. Liesel’s literary thievery is given a nice cinematic touch: when she snatches a forbidden book off a bonfire, the secrecy of it steams hot and red through her coat. The crucial relationships between Liesel and her extended family – including Rudy and Max – are also given plenty of depth and heart. By the time the bombs start raining down on their little town, the emotional stakes are as high as they need to be. Percival handles some crucial scenes with just the right amount of sentiment, particularly the snowball fight that erupts in the basement: a moment of pure, unexpected joy stolen from a world broken by war and genocide.

The Book Thief benefits greatly from its excellent cast. Nélisse – still so young and raw – wanders effectively through war-torn Germany: she is the focal point of both book and film; the child-like eyes through which we witness great love and also enormous hatred. She’s ably abetted by Liersch, a cheeky triumph as Rudy, a character so full of life and charm that he’ll warm and break your heart many times over. Rush and Watson, of course, are very good indeed – the former embodies Hans’ gentle, loving soul; the latter hides a huge heart beneath the prickly armour in which she cloaks herself all day.

To be perfectly fair, the film occasionally falters beneath the weight of one too many wartime clichés. Without the benefit of a stronger narrative voice (Roger Allam’s Death pops in only once in a while to propel the tale forward), The Book Thief feels safe and conventional when some of its ideas are anything but. It’s a story, really, of institutionalised death-mongering and the most dangerous and quiet of rebellions, but that doesn’t always come through as strongly as it should. The decision to sprinkle some German dialogue into the film feels jarring as well, although that’s how Zusak’s novel (originally written in English) unfolds.

As for its merits as an adaptation – by necessity, The Book Thief leaves out details galore and metes out tiny injustices to several supporting characters, many of whom arguably represent some of Zusak’s greatest insights and ideas. Tucked away in the background is the sad, bitter backstory of Ilsa Hermann (Barbara Auer), the mayor’s wife from whom Liesel also filches a few books. Stripped from the film, too, are those characters who have completely bought into the Führer’s worst philosophies – including Hans and Rosa’s biological son. That removes much of the brooding complexity of the novel, which takes time to consider the collective and individual burdens of guilt borne by Germany and its citizens in relation to the Holocaust. Worst of all is the loss of Death’s unique narrative cadences, his grasp of the English language both weird and wonderful.

But, on the whole, The Book Thief is incredibly faithful to the spirit – if not the letter – of Zusak’s book. With a few stumbles and omissions,  Liesel’s heartbreaking journey towards finding – and, inevitably, losing – a family of her own is preserved, and quite affectingly translated onscreen. In that sense, while the film may have lost quite a bit of the novel’s darker bite and punch, it remains a powerful tale of human connections: the ones we make out of love and fear, and the ones that sustain us in the darkest of times.

Summary: The story loses some of its steam in migrating from page to screen, but it’s still a powerful tale, relatively well-told.