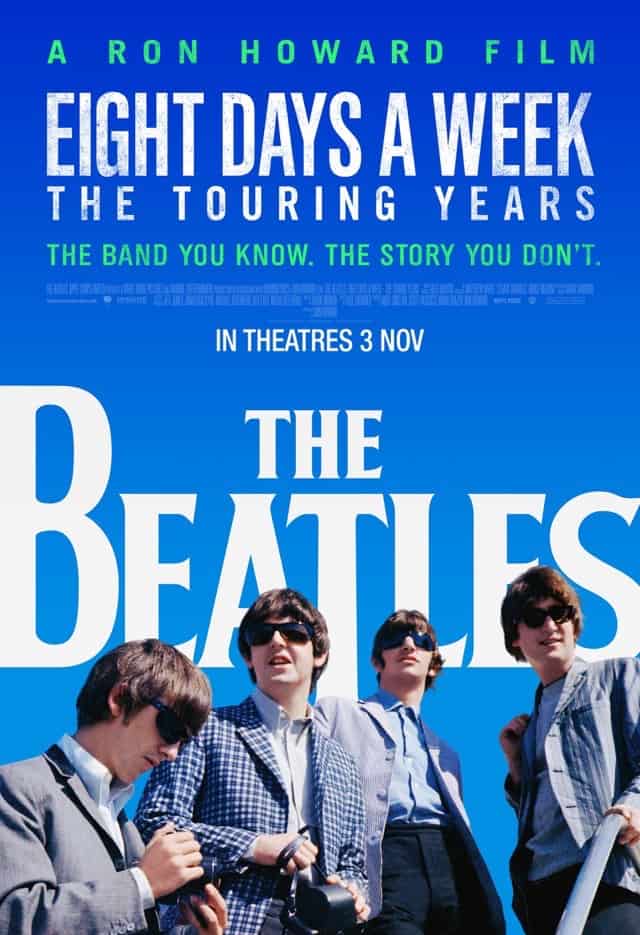 In 1964, after enjoying success in their home country, four Liverpudlian lads made their first appearance in the United States on The Ed Sullivan Show. The rest, as they say, is history, with said history chronicled here by filmmaker Ron Howard. This documentary splices together archival concert and interview footage, some of which is hitherto unseen, with present day interviews to provide a behind-the-scenes look at the band’s experiences on the road. We glimpse lots of fainting, screaming female fans; see John, Paul, George and Ringo at their goofiest and most candid, and hear from currently-active artists and musicians about the impact the Beatles had on them when they were growing up.

With a maelstrom of bleakness and negativity seemingly unavoidable these days, everyone needs an ameliorating balm, and this wistful, joyous nostalgia trip should do the trick. While longtime devotees of the Fab Four probably know all the factoids about the band’s history by heart, it’s still fun spending time in their presence. There is an almost mythic air about the Beatles: they were not pre-fabricated by committee in Simon Cowell’s office, they rose from modest obscurity and swiftly dominated the world, millions of hysterical teenagers in the pockets of their tailored suits. The sociopolitical climate in the U.S. then was even more fraught with tension than it is now, with the assassination of John F. Kennedy fresh in the public’s minds. People needed to feel happy, and the Beatles were as happy-making as they come.

In addition to their musical talent, the Beatles’ affability won them plenty of fans. For those of us who weren’t following their endeavours at the time (i.e. those who weren’t born yet), it’s a bit of a surprise to see how funny the Beatles were in their interactions with the press. When a TV reporter asks John “which one are you,” Lennon replies without missing a beat “I’m Eric.” The reporter believes him. The original manuscript with the lyrics of I Want to Hold Your Hand scrawled on it has a postscript that reads “3/10 – see me!” Writer/director Richard Curtis identifies the Beatles as the platonic ideal of friends one would want to hang out with – he doesn’t use the phrase, but basically, the Beatles were his squad goals. Because of how much the boys seem to be enjoying their fame and popularity, it’s all the more emotional to see it take a harsh toll on them, the documentary covering their dizzying highs and also their hollowest lows.

Those who dismissed the band as lacking artistic merit have since eaten their words. We love the Beatles, but perhaps when composer Howard Goodall puts them on the same pedestal as Mozart, saying the Beatles have a similar ratio of memorable melodies in their prolific output, that might be overstating it a tad. Just as we’ve referred to them in this review, the film treats the Beatles as a singular entity, a four-headed, mop-topped Hydra. While there’s no doubt that they functioned as a unit and that their creative partnership and friendship was their lifeblood, it would’ve been nice to see more of John, Paul, George and Ringo as individuals.

Howard wants to document both the Beatlemania phenomenon and the lads themselves, but the balance is slightly weighted in favour of the former. It would seem that more than half the interviewees, including actors Whoopi Goldberg and Sigourney Weaver, were observers from the outside. Aside from the two living Beatles McCartney and Starr, the most insight is gleaned from Larry Kane, the broadcast journalist who spent the most time on the road with the band. Kane recounts how Lennon and McCartney consoled him following the death of Kane’s mother, and fondly recalls how he initially baulked at the assignment, thinking it wasn’t “real news”.

In addition to the general frivolity that follows teen idols about, the film has its heavier moments. The Civil Rights movement was unfolding just as the Beatles reached the height of their popularity in the States, and their refusal to perform at a segregated arena in Alabama is credited with eventually causing other stadiums in the south to abolish segregated seating. We also see the Beatles at their most burned out, with Harrison remarking that it must’ve been really difficult for Elvis Presley, since he was just one guy but the Beatles had each other to lean on when things got rough. There’s a clarity to the film’s recounting of the whole “more popular than Jesus” hullabaloo, when Lennon’s remark about the band’s fame was taken out of context and led to religious groups boycotting the Beatles.

Because the film’s focus is on “the touring years”, the period of time when the Beatles were their most esoteric and consequently most fascinating is glossed over. Just as Henry Jones Sr. remarked in Indiana Jones and the Last Crusade, “you left just as you were becoming interesting”. In any case, Eight Days a Week does its subjects justice and is a delightful slice of pop culture pie. Stay past the end credits to watch the 1965 Shea Stadium concert. Alas, even after a remastering at Abbey Road Studios, the sound quality’s still not great.

Summary: It’s not especially incisive and there aren’t any explosive revelations for long-time Fab Four fans to take in, but Eight Days a Week is a pleasantly entertaining baby boomer time capsule.