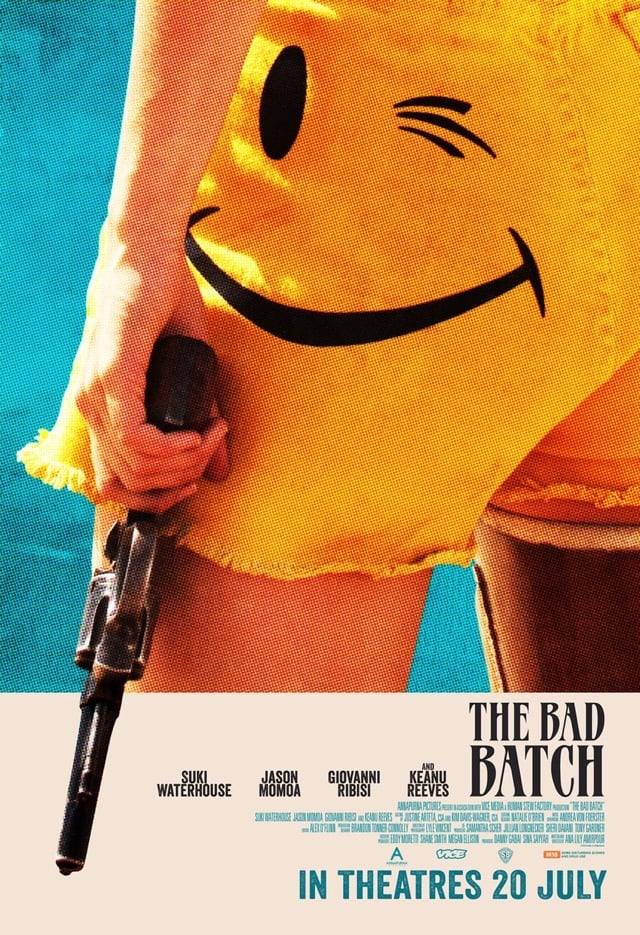 There’s something about the desert that inspires madness. Whether it’s dehydration-induced hallucination, the sense of isolation in a vast open space, or just the arid heat, the desert is fine backdrop against which madness can unfold. This twisted, post-apocalyptic fairy tale is very mad indeed.

Our heroine is Arlen (Waterhouse), who wanders across the god-forsaken Texas desert. She is part of ‘the bad batch’, individuals deemed unproductive to society, and exiled to fend for themselves. Arlen is captured by cannibals, who saw off and eat her arm and leg. Arlen manages to escape, and is taken by a Hermit (Carrey) to a settlement called Comfort. The Dream (Reeves), a drug lord, rules over Comfort, keeping his followers compliant by supplying them with illicit substances during raves. Miami Man (Momoa), one of the cannibals who kidnapped Arlen, is searching for his lost daughter Honey (Fink), who has been adopted by The Dream. A relationship fraught with tension and attraction develops between Arlen and Miami Man, as they fight for survival in an unforgiving world.

The Bad Batch is written and directed by Ana Lily Amirpour, who made her feature film debut with the “Iranian vampire spaghetti western” A Girl Walks Home Alone at Night. The Bad Batch is hard to describe, and even harder to review. It’s destined for cult status, and VICE Creative Director Eddy Moretti, who is an executive producer on this film, dubbed Amirpour “the next Tarantino”. This is a heady, trippy experience, abstract art painted on a canvas of post-apocalyptic desolation. Often graphic when it’s not moving very slowly, it’s often a challenge to watch. While vastly more expansive than Amirpour’s first film, she’s hardly ‘gone Hollywood’ with her sophomore effort, which is almost defiantly weird. There’s an audience for this, and it would probably play well at a festival like South by Southwest, but The Bad Batch is self-indulgent and meanders without a centre to anchor it.

Waterhouse, known mainly as a model and entrepreneur, comes off like a cross between Cara Delevingne and Kristen Stewart. The visual effects used to create the illusion that Arlen is an amputee are seamless, and the yellow shorts with a winking face printed on the back is a cool visual device. There’s every opportunity for Arlen to ascend to the pantheon of badass genre movie heroines, but it seems that isn’t exactly what Amirpour had in mind. The character floats through the story, such that when she does something that directly impacts the story, it feels less significant than it should.

Momoa plays a musclebound, tattooed antihero – while this doesn’t sound like a stretch for him, it’s probably the most acting he’s done in his career. Momoa strives to evince a depth from the Miami Man character, who is a knife-wielding cannibal but also has a soft side and is a gifted artist. The relationship that develops between Arlen and Miami Man seems purposely vague and under-developed.

Reeves’ character, The Dream, who lives in luxury surrounded by a harem who bears him children, is clearly inspired by notorious drug lord Pablo Escobar. It comes off more as an odd bit of stunt casting than anything else, even if Reeve is fairly fun in the role. The raves that The Dream presides over are strongly reminiscent of music festivals like Burning Man, and it turns out that Amirpour went to Burning Man and took acid, which inspired the acid trip scene in the film.

Carrey, gaunt, grimy and nigh-unrecognisable beneath a scraggly beard, seems to relish playing the Hermit. It’s the kind of character actor part he wouldn’t have done in his comedy movie A-lister heyday, and it’s the right pitch of quirky comic relief for this movie.

The Bad Batch will remind connoisseurs of the exploitation films that came out of Italy in the 70s and 80s, or of Alejandro Jodorowsky’s trippy psychedelic westerns. Amirpour has described the film as “El Topo meets Dirty Dancing”. While there’s a seductiveness to The Bad Batch’s scorched dreaminess, the film lacks the energy and momentum to sweep the viewer up in its madness.

Summary: The Bad Batch’s peculiarity will attract some audiences but alienate others. It’s an arthouse exploitation cocktail that’s been spiked with a little something extra, and it’s very much an acquired taste.