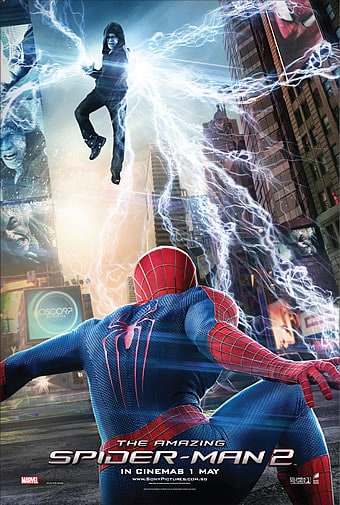 In this new Part 2, Peter Parker/Spider-Man (Garfield) sorts out his complicated relationship with Gwen Stacy (Stone), still haunted by the death of Gwen’s dad Captain George Stacy (Leary). Peter’s childhood friend Harry Osborn (DeHaan) returns from boarding school to see his dying father Norman (Cooper), founder of Oscorp. Lowly Oscorp employee Max Dillon (Foxx), who has an unhealthy infatuation with Spider-Man, is transformed into the villainous, all-powerful Electro during a lab accident. As Harry develops a vendetta on Spider-Man and turns into the Green Goblin, he and Electro unite to bring the web-slinger down once and for all.

Spider-Man fans greeted 2012’s The Amazing Spider-Man with much scepticism and this reviewer found himself surprised by the film, the chemistry between Andrew Garfield and Emma Stone its strongest point. That continues to be true for the sequel. Unfortunately, this follow-up is often a downright cheesy affair when not focusing on Peter Parker’s interpersonal relationships. The scenes between Peter and Gwen and Peter and Harry are great, but when the movie turns its focus to the superheroics and the bad guys, as it must, prepare to cringe a little. One would think that comic-book movies have progressed past the point of cartoony, maniacally cackling supervillains. This movie is wall-to-wall maniacally cackling supervillains. 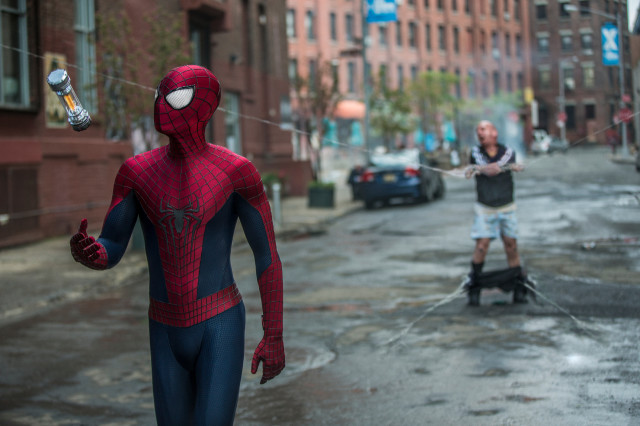 Now, we aren’t saying all comic-book movies should be grim and depressing, far from it. The Amazing Spider-Man 2 is, if nothing else, pretty fun. However, director Marc Webb has repeatedly expressed a desire to keep the new film series grounded in some form of reality, hence the more “realistic” and less outlandish appearances of the costumed villains in this movie. Yet we have Spider-Man yanking down the trousers of Russian mobster Aleksei Sytsevich (Giamatti) to reveal rhino-print boxers. We have a container of volatile capsules that narrates “Warning: Plutonium 238 is a radioactive material and is highly explosive”. We have Spider-Man whistling his own theme song as he fights Aleksei (the theme song is also his ring tone). And all this just in the first Spider-Man-centric action sequence following the prologue featuring Peter’s parents. 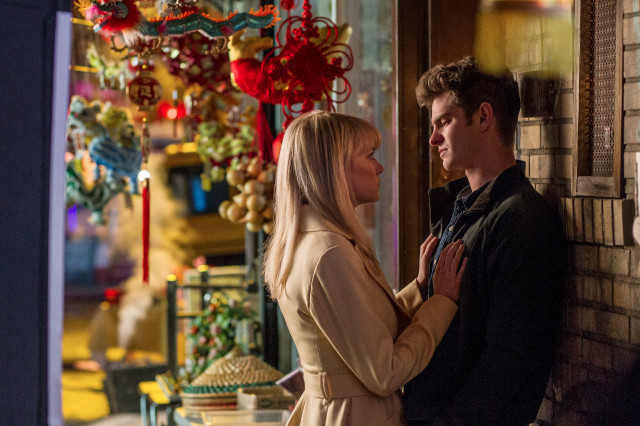 Garfield and Stone continue to be a delight when together onscreen. Garfield has embraced the role and does display some pretty impressive physicality; it’s not easy for an actor to make it clear to audiences that it actually is him under a superhero suit and mask, something Garfield achieves. He makes Peter Parker very endearing and it’s impossible not to break into a smile seeing how much he’s enjoying himself. It is during Peter and Gwen’s shared moments that the talent that Webb displayed in (500) Days Of Summer is evident. This is also the best Spider-Man’s outfit has ever looked in the movies.

It’s often said that “sequels are all about the villains” but the rogues that Spidey faces off with in this film are not all that remarkable. Jamie Foxx’s Electro is essentially Jim Carrey’s Riddler from Batman Forever, with shades of Richard Pryor in Superman III. He’s the put-upon nerd who’s ignored by everyone and makes the world pay when he gains superhuman abilities. We’ve seen this countless times before, and as far as supervillain origin stories go, falling into a vat of electric eels isn’t one of the greats. DeHaan showed a lot of promise in Chronicle and does make a great bratty rich kid here, sharing a good deal of chemistry with Garfield. However, there is far from enough time dedicated to the strained friendship between Peter and Harry, with Harry becoming a full-fledged monster in the same movie in which he’s introduced. Giamatti is completely wasted in his minor role as the Rhino, hamming it up as a beyond-stereotypical Russian mobster. There’s also no real “uniting” of the villains, who tackle Spidey one at a time. To top it all off, Dr. Ashley Kafka, who was female in the comics, is played by Marton Csokas as an eccentric German-accented mad scientist with a silly hairdo. 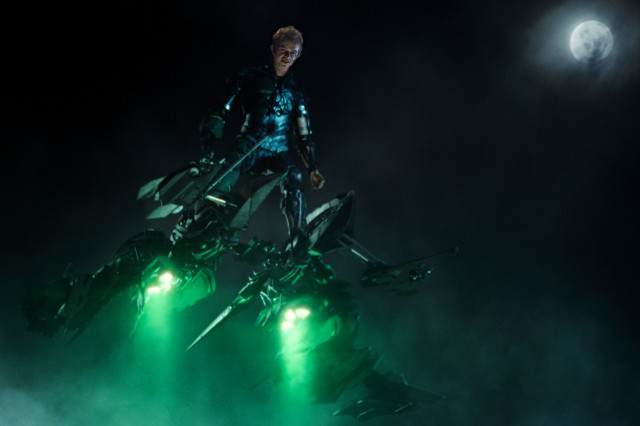 In terms of the spectacle, The Amazing Spider-Man 2 does boast some sizeable action set-pieces, most notably a confrontation in Times Square in which Electro feeds off the electricity coursing through the New York power grid. Webb injects a dynamic style to the sequences but some tricks, most notably a prolonged bullet-time breakdown, do seem a little tired. The penultimate battle at a power plant seems almost completely synthetic and does carry with it a niggling “video game” feel, the CG animation by Sony Pictures Imageworks falling short of photo-realistic. That aside, the 3D here is excellent; there’s just enough stuff hurtling out of the screen to make one feel like the premium ticket price is worth it without jabbing audiences in the eyes, and sequences of Spidey swinging through the air are adequately exhilarating.

Summary: While Andrew Garfield and Emma Stone continue to be great together, The Amazing Spider-Man 2 is mostly cheesy and cartoony, entertaining in some spots but cringe-worthy in others.