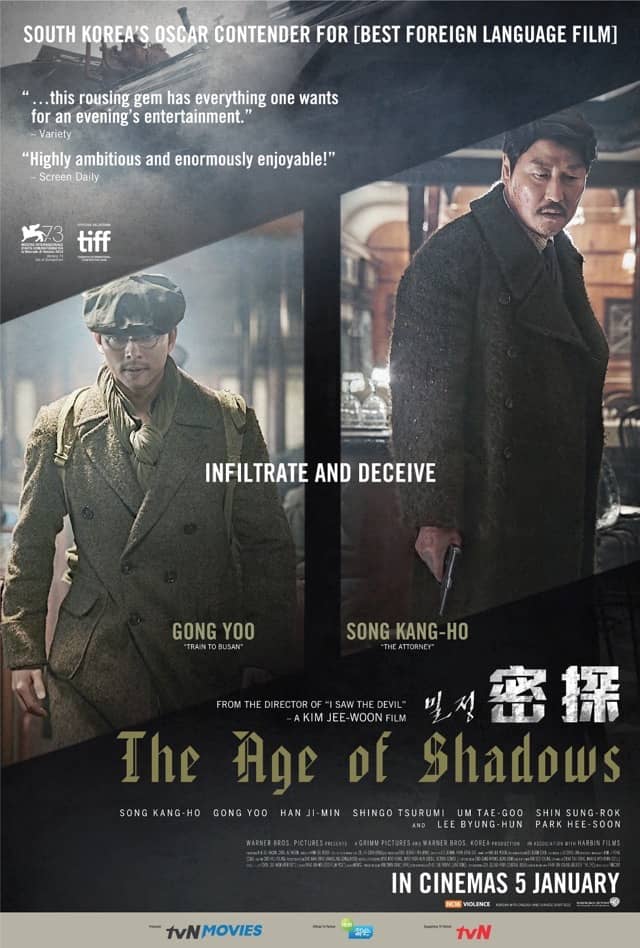 The Second World War may have concluded over 70 years ago, but if cinematic output is any indicator of national sentiment, the victims of Imperial Japanese aggression aren’t going to forgive and forget anytime soon. Less than a year after Assassination, a spy caper set in Japanese-occupied Korea, we have The Age of Shadows, another spy caper set in Japanese-occupied Korea. The Age of Shadows is undeniably stylish and chock full of pulse-pounding thrills, but a niggling case of Groundhog Day-syndrome detracts somewhat from its charm. Despite slick visuals and a humdinger of a plot, the Warner Bros-financed film is too much of the same served up too soon.

When a sting operation results in the death of an old-friend-turned-resistance-fighter, the stakes are raised for police captain Lee Jung-chool (Song). Working for the Japanese colonial government has always been a profitable arrangement for Lee, but when the police chief (Tsurumi) discovers his personal connection, he’s sent to infiltrate the very heart of the Korean resistance. Meeting with the charismatic Kim Woo-jin (Gong) under false pretenses, Lee is soon embroiled in a high-risk smuggling scheme that will set his professional and patriotic instincts at odds. Counter espionage might just turn into espionage for real if the resistance manages to reignite Lee’s loyalty to his country.

The Age of Shadows is South Korea’s entry for the Best Foreign Language Film Oscar, and all the stops have accordingly been pulled out. There’s director Kim Jee-woon, whose eclectic oeuvre includes the first Korean film ever screened in American theatres (2003’s psychological horror A Tale of Two Sisters); there’s the highly-regarded Song Kang-ho, who shared screen time with Chris Evans and Tilda Swinton in Bong Joon-ho’s Snowpiercer; and then there’s the multi-million budget which allows for lavish period sets and high-octane gunfights. Oh, and Lee Byung-hun has an extended cameo as resistance leader Jung Che-san. He’s only the most well-recognised Korean actor in Hollywood now (not counting Korean-Americans like John Cho). It’s all very well to showcase Korea’s best and brightest, but The Age of Shadows is just a little too obvious regarding its commercial ambitions. This makes it difficult to think of it as anything more than an entertaining popcorn-flick.

If you’re one of the peeps now thinking, “yeah, well, sometimes I just want to watch a good escapist movie”, you’re in luck. The Age of Shadows has a number of gruesome moments that disqualify it from ‘fun-for-the-whole-family’ status, but those who like a little edge to their entertainment should feel right at home. There’s enough violence for the film to accurately depict the circumstances of armed insurrection without turning the whole affair into a bloodbath. Character development and elaborate action sequences are neatly interspersed such that neither feels excessive. This is what director Kim Jee-woon excels at: carefully modulated spectacle. The film is flashy and occasionally lurid, but doesn’t sacrifice logic and plot in favour of Michael Bay-esque explosions.

Cast performances are solid without being mind-blowing, though this isn’t for lack of talent. Song’s pedigree is undisputed and Gong Yoo looks set to one-two punch his way into the major leagues after crowd-pleasing turns both here and in Train to Busan. The problem, however, is that the characters they’re playing don’t bring anything new to the table. Gong’s rebel leader is your textbook upstanding man of honour, while Song’s police captain is your average man looking out for his own interests during turbulent times. The developmental arcs of The Age of Shadows’ key players unfailingly go where too many have gone before, including its stylistic predecessor, Assassination.

Most disappointing is the portrayal of Higashi, the vicious police chief played by Japanese actor Shingo Tsurumi. Higashi is indisputably the main antagonist of the film and despite some initial promise, soon devolves into the sadistic, remorseless brute that everyone loves to hate. Here, too, The Age of Shadows merely repeats a longstanding tradition in Korean film whereby any and all Japanese characters are depicted as unrepentant villains. Such a simplistic appeal to the nationalistic, anti-Japanese sentiment that still rages in South Korea today does not reflect well on a film that’s supposed to represent the country on the world stage.

All of this would have been fine in a run-of-the-mill Korean blockbuster, but one’s expectations are naturally raised for a film that’s been submitted for Oscar consideration. Considerably less sophisticated than previous years’ submissions like The Throne and Haemoo, The Age of Shadows is unlikely to become the first South Korean film to finally make the nominee shortlist, let alone win.

Summary: A well-executed spy thriller sorely lacking the pizzazz to elevate it into filmic greatness.