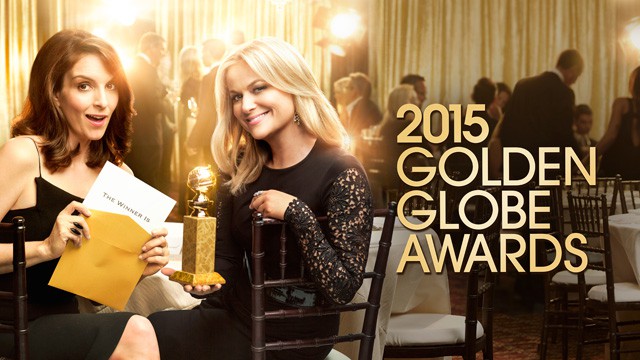 Tina Fey and Amy Poehler hosted the proceedings for the third and final time, delivering a gut-busting opening monologue that established a tone of not taking things too seriously and taking as many jabs as possible while stopping a safe distance from being confrontational or offensive – saving their sharpest barbs for scandal-plagued comedian Bill Cosby.

Putting things into perspective, Fey let fly with this zinger regarding Cecil B. Demille Award recipient George Clooney and his better half: “George Clooney married Amal Alamuddin this year. Amal is a human rights lawyer who worked on the Enron case, was an advisor to Kofi Annan regarding Syria and was selected for a three-person UN commission investigating rules of war violations in the Gaza strip. So tonight, her husband is getting a lifetime achievement award.”

While naturally not nominated at all, The Interview and the attendant controversy certainly made its presence felt. Fey greeted the A-list crowd with “Welcome you bunch of despicable, spoiled, minimally talented brats,” referencing producer Scott Rudin’s labelling of Angelina Jolie in that infamous leaked Sony Pictures email.

“The biggest story in Hollywood this year was when North Korea threatened an attack if Sony released The Interview, forcing us all to pretend we wanted to see it,” Poehler added. The entire show was almost stolen by comedienne Margaret Cho, in character as a North Korean general and the editor-in-chief of “Movies Wow” magazine. Unsmiling and clad in full military uniform, this “member of the Hollywood Foreign Press Association” demanded to have her photo taken with Meryl Streep, a request Michael Keaton obliged. In the hours since the ceremony aired, the jokes have attracted their share of controversy, seeing as the human rights crisis in North Korea is a very real one.

We watch live TV for the gaffes and hiccups, and while there were no major ones for this telecast, those that happened were still amusing. Lily Tomlin mistakenly said “House of Cards” when she meant “House of Lies” and Kevin Spacey dropped a precision F-Bomb when accepting his award for House of Cards. A visibly tipsy Ricky Gervais, glass of red wine in hand, sheepishly tried to avoid offending anyone, bringing his scathing Golden Globes hosting stints to mind. It was also pretty endearing to see Benedict Cumberbatch star struck as he presented the Best Supporting Actor award alongside Jennifer Aniston. The Purple One himself, Prince, made a surprise appearance to present the Best Original Song award, toting a cane.

On a more serious note, the tragic terrorist attack on the offices of French satirical newspaper Charlie Hebdo loomed large over the ceremony. Helen Mirren walked the red carpet in a Dolce & Gabbana gown embellished with a blue fountain pen as a brooch. The attendees rose to their feet for Dutch journalist and HFPA President Theo Kingma, who saluted the slain journalists and cartoonists during his speech. Both Jared Leto and George Clooney uttered the phrase “Je Suis Charlie”, French for “I Am Charlie”. The phrase has become a rallying cry in the wake of the attack.

Another emotional moment came during Michael Keaton’s acceptance speech after he was named Best Actor in a Musical or Comedy for Birdman. After expressing his profuse gratitude to director Alejandro González Iñárritu, he recounted his upbringing in Pennsylvania as one of seven children and fought back tears as he acknowledged his son Sean, whom he described as his “closest friend”. Also overcome with emotion was Gina Rodriguez, who beat out seasoned TV actresses such as Julia-Louis Dreyfus and Edie Falco to take home the Best Actress in a Comedy Series award for Jane The Virgin.