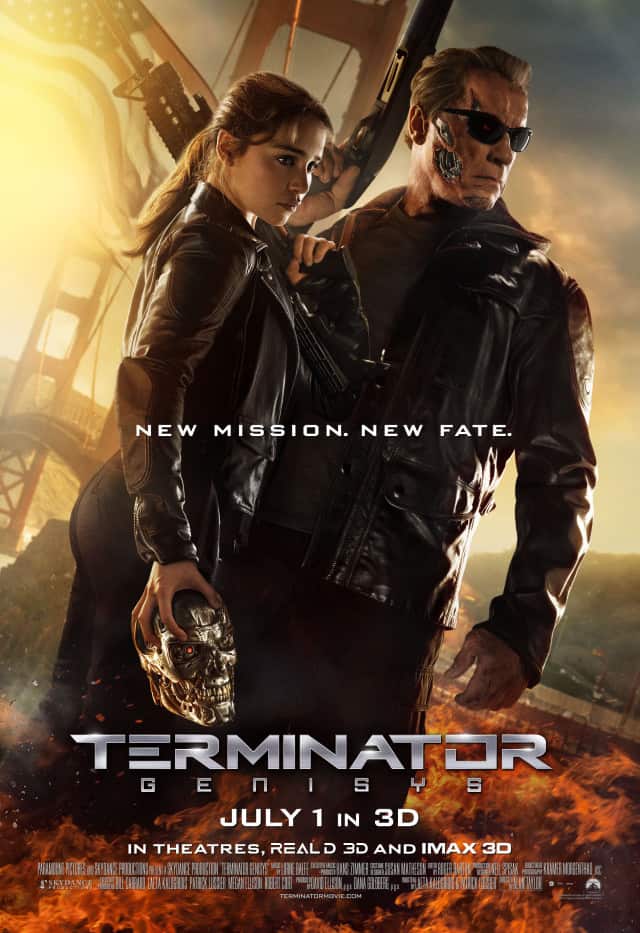 “There is no fate but what we make” – the filmmakers behind the fifth entry in the Terminator film series hope to rewrite its fate, after the third and fourth films left most critics and moviegoers cold. Sci-fi fans know the drill – artificially intelligent network Skynet has taken over the world, killing most of earth’s population in the apocalyptic “Judgement Day”. In the future, John Connor (Jason Clarke) leads the resistance against the machines. In this reboot, John sends his trusted lieutenant Kyle Reese (Courtney) back in time from 2029 to 1984 to save John’s mother Sarah (Emilia Clarke) from the T-800 Terminator (Schwarzenegger/Brett Azar/Aaron V. Williamson). Kyle arrives in the past to discover he has entered an alternate timeline where Sarah Connor already knows her destiny and has been watched over by an aging T-800 she has nicknamed “Pops” (also Schwarzenegger). Forced to team up with Sarah and Pops, Kyle has to figure out what this means for the future as Skynet takes on a new form; the universal connectivity app “Genisys”.

2015 has already seen the release of new Mad Max and Jurassic Park films, with the seventh Star Wars movie due in December. We won’t be griping about the prevalence of sequels and reboots, because those can be good – it seems the problem isn’t so much that Hollywood has run out of ideas but that studio executives are banking too much on brand recognition and the built-in audience a pre-existing intellectual property brings with it. Terminator Genisys is caught in a paradox: one won’t be able to fully grasp its place in the larger Terminator mythos without having seen the earlier films, but if one holds the first two movies very dear, it’s likely to be a considerable disappointment. The “alternate timeline” route, not unlike with the 2009 Star Trek reboot, seems like a reasonable premise for a series built on time travel. However, the directions that Laeta Kalogridis and Patrick Lussier’s screenplay takes this in often feel like desperate attempts to stretch out a series that should have ended with 1991’s T2 (or at least the theme park attraction T2: 3D Battle Across Time). Judgement Day is postponed – again – and our protagonists have to stop this new Judgement Day from happening – again.

The film is comparable to a greatest hits album as sung by a cover band – it’s trying its darndest to add something to the existing material but often feels perfunctory in having to hit those certain iconic waypoints along the way. Genisys actually does a fine job of setting up its fairly convoluted back-story in its opening minutes – we’re told in relatively concise fashion what Skynet is, what happened on Judgement Day, who John Connor is, why Kyle Reese needs to be sent back in time and what the scope of the threat is. Even then, more than a passing familiarity with T1 and 2 is needed for all of it to make proper sense. There’s also the matter of the spectacle – sure, there are plenty of action set pieces and there is some cool new imagery, particularly during a scene involving a MRI scanner, but none of it is truly awe-inspiring or unique. The first two Terminator films, T2 in particular, broke a lot of ground in the realm of special and visual effects and packed in jaw-dropping moments that still hold up today. There is a marked over-reliance on computer-generated imagery and yes, while this is a series about robots, it all feels too synthetic. There’s a helicopter chase that looks entirely like it belongs in a video game and the T-1000’s (Lee) liquid metal effects are on about the same level as those in T2 24 years ago.

Arnold Schwarzenegger’s return to the iconic role of the T-800 does lend some legitimacy to the enterprise but we’re sure some fans will find it difficult to accept that the lethal killing machine is now relegated to a softer father figure and often functions as the comic relief. Schwarzenegger still possesses the chops to pull off the action beats and is still a believable badass. However, we don’t get anything half as heart-rending as the bond between the T-800 and a young John Connor in T2, even when the Terminator is supposed to have practically raised Sarah since she was a little girl. At times, this reviewer felt like he was watching a lavishly-produced fan film that had managed to snag an actor from the original show, akin to how Walter Koenig, Nichelle Nichols and George Takei sometimes make appearances in Star Trek fan productions.

What makes it all the more difficult for this to be accepted as a proper Terminator continuation is that while Arnie is a recognisable holdover from the earlier films, all the other re-imagined characters look and feel so different than how we know them. Emilia Clarke goes from being the Mother of Dragons to the mother of humanity’s last hope. She is miscast as Sarah Connor, largely unconvincing as a badass woman who has spent most of her life under the tutelage of a purpose-built killing machine. When compared to how intense Linda Hamilton was in the role, Emilia Clarke seems like she’s merely playing dress-up, whiny rather than burdened with the fate of the human race.

Jai Courtney looks and acts nothing like Michael Biehn, making him another puzzling casting choice. Where Biehn’s Kyle Reese was a sensitive, scarred but romantic figure, Courtney is more brutish. When Kyle and Sarah get into arguments, as they often do throughout the film, it feels awfully petty instead of carrying the weight of life and death. While undoubtedly a central figure to the mythos, John Connor has never really been the most interesting character of the series. Jason Clarke is fine in the role and the major plot twist in the film (which was spoiled in the trailers and the poster) does add an interesting layer to the character, but purists will probably find it sacrilegious. Lee Byung-hun does little more than run fast and look menacing as the shape-shifting T-1000 and J. K. Simmons is entirely wasted in a throwaway bit part as the lone police officer who believes Sarah and Kyle’s far-fetched story. Doctor Who’s Matt Smith also pops up in a small but crucial role.

As a standalone sci-fi action film, Terminator: Genisys has its entertaining moments and isn’t as confusing in presenting its alternate timeline plot as it could’ve been. However, it’s impossible to pretend that this film doesn’t come with more than its share of baggage and doesn’t have a towering legacy to live up to. In riffing on what James Cameron had created with the first two Terminator films, Terminator Genisys director Alan Taylor has delivered a pale imitation of a sci-fi icon, an also-rans at best. Stick around for a mid-credits sequel-bait scene.

Summary: There is effort put into Terminator Genisys, but this attempt at continuing the franchise can’t help but feel it exists just for the sake of existing and is likely to alienate long-time fans of the series.