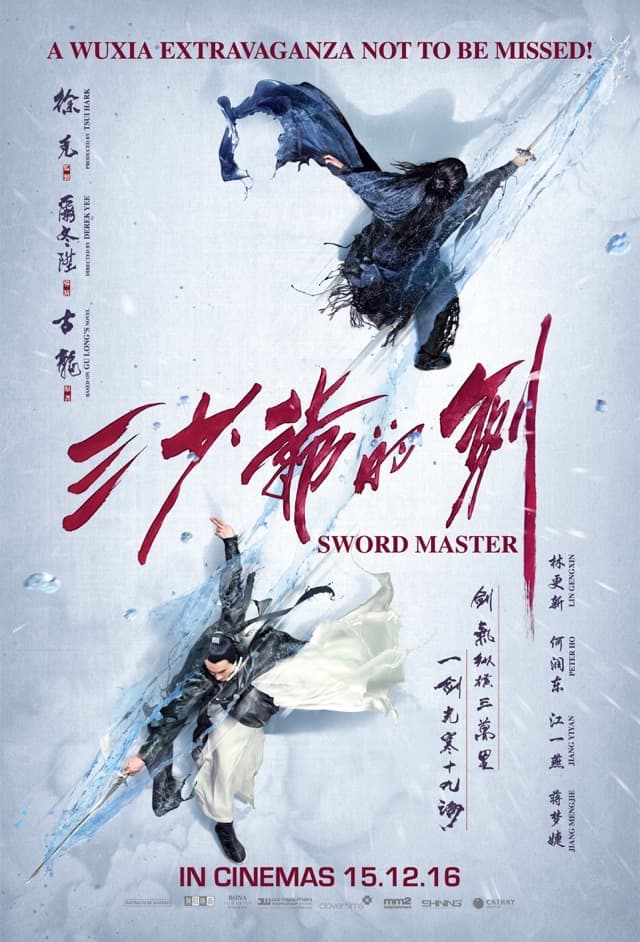 Remakes. Love ‘em or hate ‘em, they’re a part of the contemporary movie landscape. Rarely, however, does the director of a remake have such a personal investment in the material as Derek Yee does with Sword Master. And it shows. The film is a rollicking tribute to the golden era of wuxia epics, minus the dated dialogue and wire work that invite mocking laughter from CGI-inundated millennials (this reviewer sadly included). Neither cerebral nor groundbreaking, Sword Master nevertheless impresses with breathtaking choreography and a simple, unaffected charm that is becoming increasingly anachronistic.

So what’s Sword Master a remake of, you may ask? Older readers may have already deduced from the film’s Chinese title that the original in question is the 1977 Shaw Brothers’ classic Death Duel, which starred none other than Derek Yee in the lead role of jaded swordsman Xie Xiaofeng. The mantle of leading man has now passed on to fresh meat Lin Gengxin, but the plot remains essentially unchanged.

There’s the embittered Xie (or Third Master), who has retired from the martial arts world due to disgust at the amount of blood on his hands. There’s the idealistic courtesan Xiao Li (Jiang Mengjie), whom Xie meets and falls for while working incognito at a brothel. And then there’s Yan Shisan (Peter Ho), the eccentric rival who refuses to believe that his archenemy has passed on without settling once and for all whose skills are superior. Rounding up the key players is Xie’s erstwhile fiancé Murong Qiudi (Jiang Yiyan), who seeks revenge for being spurned at the proverbial altar.

All of these characters are wuxia novel archetypes, which translates into a fairly conventional storyline with little surprise or deviation from the norm. More complex characterisation and/or plotting may have resulted in a more innovative film, but, really, the plot is just side dressing for the nostalgia trip the rest of Sword Master’s components serve up. Keeping the storyline formulaic gels well with Yee’s overall vision of remaking Death Duel as faithfully as possible, complete with a retro, throwback conception of what producing a box-office success entails.

It’s precisely in these retro, throwback elements that Sword Master shines the brightest. Martial arts choreographer Yuen Bun has outdone himself with the fight scenes, where the emphasis is, all too rarely these days, on physical coordination and movement instead of glittering special effects. This isn’t to say that there are no special effects, but that these serve to complement the main spectacle of real people wielding real swords (well, real movie prop swords, at any rate). The result is a series of gloriously old-school swordfights from which anyone whose blood has ever been roused by the swashbuckling spirit of wuxia will surely derive satisfaction. Best of all, Sword Master manages to pack a staggering array of fighting styles into its compact runtime, scoring points for variety as well as polish.

It’s also remarkable how, in spite of all the flashy bells and whistles, Sword Master retains an unworldliness that parallels the wuxia world’s paragons of chivalry and honour. The film’s characters encompass all shades of grey from pristine white to pitch black, but there’s just something about a pugilist’s unflinching commitment to justice that takes one back to a simpler time. The humour is goofy and offbeat, yet refrains from the mean-spiritedness of slapstick or farce. The mantras spouted by Xie and Yan Shisan would sound laughably naïve in any other context, yet acquire heartfelt resonance within the film. To watch Sword Master is to take a time tunnel back some thirty-odd years, to a period where audiences were less jaded than they are now.

Just as the world-weary Third Master inevitably rediscovers his sense of purpose, be prepared for your inner wide-eyed child to resurface through layers of cynicism. Sword Master won’t blow you away with an elaborately crafted plot or over-the-top special effects, but is testament to the lasting power of a good wuxia story.

Summary: Sword Master will take you back, all the way back. Old-school style. But, you know, in a good way.