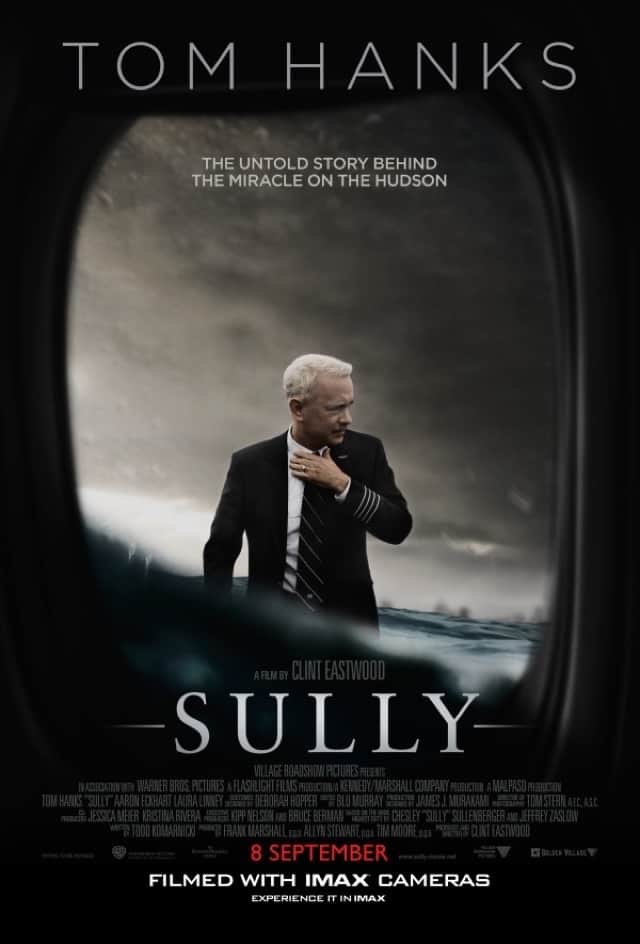 Clint Eastwood takes us behind the ‘Miracle on the Hudson’ in this biopic. On the morning of January 15, 2009, US Airways Flight 1549 is making a routine trip from New York City to Charlotte, North Carolina. When bird strikes cripple both engines, the plane comes in for an emergency water landing on the Hudson River, with all 155 souls on board miraculously surviving. At the controls are pilot Chesley ‘Sully’ Sullenberger (Hanks) and First Officer Jeffrey Skiles (Eckhart). Sully is vaunted by the press as a hero and becomes an overnight sensation, but the attention and scrutiny prove overwhelming for him and his wife Lorraine (Linney). The National Transportation Safety Board (NTSB) concludes that according to simulations, Sully could have safely landed the plane back at LaGuardia Airport, calling his judgement into question and putting his career and reputation on the line.

It’s easy to see why the public gravitated to the story of the Miracle on the Hudson: it was harrowing but ended well, it was a glimmer of good news amidst the usual barrage of negativity, and an endearing everyday hero was at its centre. But is there enough to the story to sustain a feature film? As it turns out, barely. At 96 minutes, Sully is shorter than your average ‘based-on-a-true-story’ drama, but even then, it feels padded out. The film quickly becomes repetitive and the portrayal of Sully’s self-doubt lacks nuance. Todd Komarnicki’s screenplay trades in caricatures, and while we see what he’s going for with a scene in which a bartender excitedly pours Sully a cocktail he’s concocted in the pilot’s honour, it makes the true story come off as cartoony. A few passengers are highlighted in a folksy ‘aw shucks’ manner; these moments feel like they belong in a TV movie than an awards-season film.

The main selling point of the film apart from its director and star is the re-enactment of the dramatic water landing. The sequence, shot with the new Alexa IMAX cameras, has an appropriate graveness and tension to it, even if the moment of impact itself looks a little like it’s a cut scene in a video game. Eastwood does an effective job of putting the audience in the cockpit as the situation unspools, but perhaps there’s something questionable about taking an almost-tragedy and turning it into big-screen spectacle. There’s merit to the argument that because it all ended well for everyone on board, nobody will take offence with this depiction, but it can also be argued that Sully is trading on disaster in a similar way to Titanic. Beyond that, there are distasteful, oblique visual references to 9/11 that seem manipulative in trying to elicit emotion through association with the terrorist attack.

It’s hard to go too wrong when Tom Hanks is the de-facto heart of your movie. The actor brings his trademark affability to bear as an unassuming pilot whose world is shaken by a close call on the job, followed by equal amounts of hero worship and second-guessing. The world fell in love with the earnestness, graciousness, work ethic and humility displayed by Sully in the aftermath of the Hudson landing, and moviegoers in general have already fallen in love with Hanks. He suits the role despite bearing only the slightest passing resemblance to the real-life Sully, even with the white hair and moustache. It’s something of an obvious casting choice and while it might have been more interesting to see an actor who isn’t as established a ‘likeable everyman’ as Hanks take on the role, Hanks does an expectedly fine job with it.

The conventionally-handsome Eckhart is a different brand of all-American than Hanks is, and they end up complementing each other nicely. Skiles received what some might say is a disproportionately small amount of the credit, but the working relationship and friendship between the two does brim with positivity. Because Eckhart looks more like the hero who would be landing the plane in a Hollywood action movie, it further accentuates the ‘unlikely hero’ quotient Hanks’ Sully has going for him.

Linney’s abilities as an actress aren’t stretched very far, with Lorraine portrayed as little more than the stock worried wife back home. By design, the NTSB panellists are faceless suits, bureaucracy incarnate, their impersonality serving as a contrast to Sully’s humanity.

Sully is respectable in its own right, but the emotional heft present in the best biopics is lacking here. As the story was extensively covered by the media, we’re familiar with the broad strokes. While there’s some insight to be gleaned from the film and the procedural aspect is easy to follow, it’s nothing that’s remarkably revelatory. Sully is more like a single-engine Cessna than a commercial jetliner: airworthy but slight.