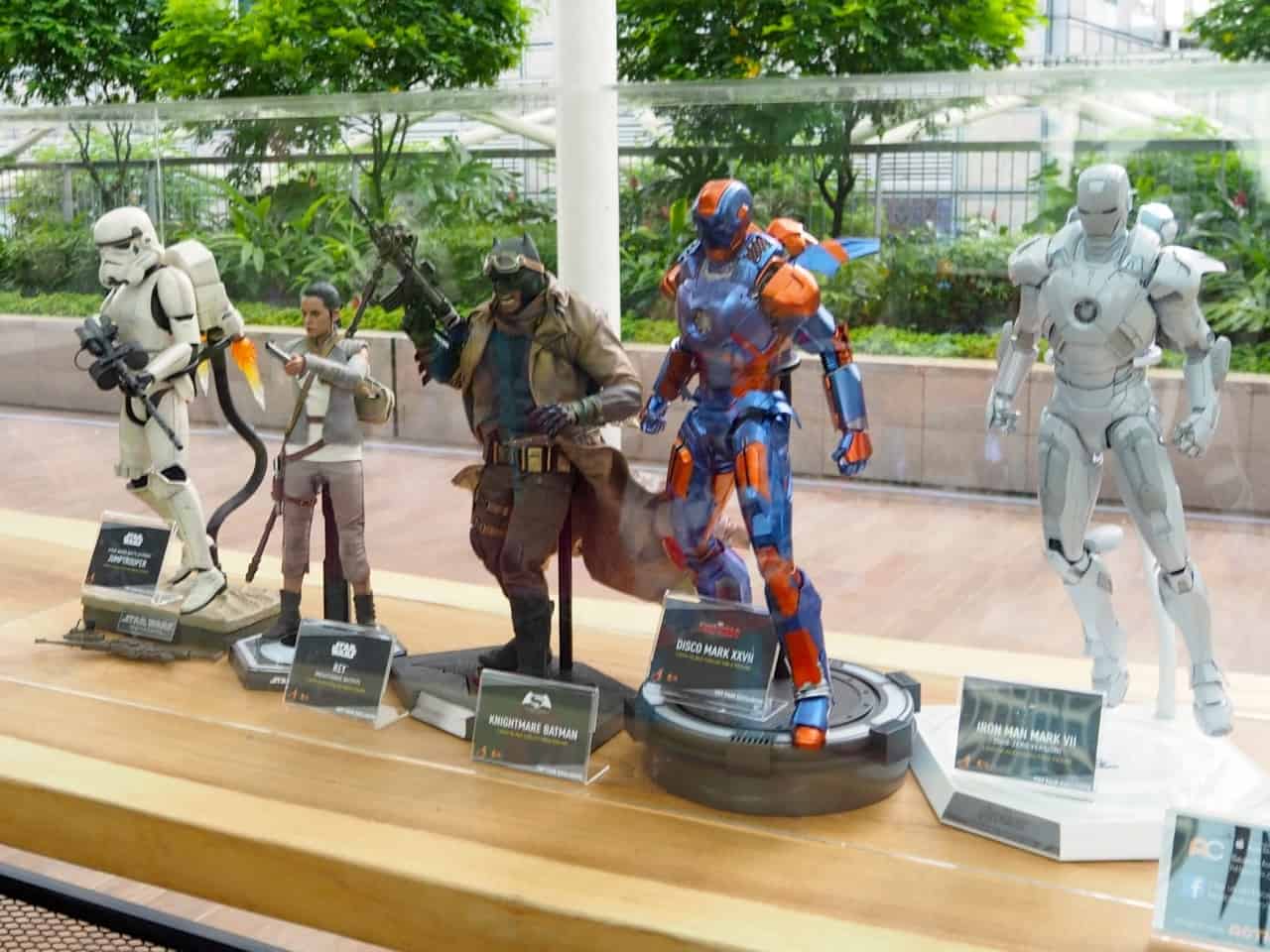 The annual event, organised by ReedPop, is in its ninth year. Reed Exhibitions assistant project director Lin Koh repeatedly referred to this year’s instalment as “crazy”, “massive” and “insane”. She had the numbers to back it up – a total of 43 invited guests, including writers, artists, cosplay celebrities and musicians, will be meeting fans and holding panel discussions at the convention. We were told that it’s up from last year’s figure of 29. 263 companies will be participating, releasing 193 exclusives and new products at STGCC between them. 45 000 attendees are expected over this Saturday and Sunday.

This year, STGCC will host its first ever computer game tournament, the STGCC eSports Mountain Dew Cup 2016. An exclusive mystery Be@rbrick figurine will be unveiled, and exclusive Hot Toys figures being sold include Disco Iron Man, Resistance Outfit Rey from Star Wars: The Force Awakens and Knightmare Batman from Batman v Superman: Dawn of Justice. The Hot Toys booth is always a highlight of the convention floor, and this year’s display will include a staggering 1/6th scale diorama re-creating the spectacular clash between Team Cap and Team Iron Man from Captain America: Civil War.

Yu had some practical advice for those looking to become full-time artists. “As artists, we need to have the mindset of an entrepreneur, because at the end of the day we’re running our own business and cultivating your brand, you’re trying to establish yourself.” Yu’s resin sculptures and collectibles have been exhibited in cities including Tokyo, Beijing, London and New York.

Choo related an encounter he had with a member of the public when he was drawing caricatures in a local mall. “There was this rich-looking lady, and she asked me ‘so where did you study?’ I said ‘NUS (National University of Singapore). I majored in economics.’ She replied ‘Economics! Your parents must be so sad that you became an artist, what a pity.’ And I was like ‘I think my parents are quite okay with my job right now.’” He added with a grin that he drew her nose a fair bit bigger in the caricature. “I feel that we need a few Joseph Schoolings in our art industry to really help inspire more young artists,” he continued, referencing the Olympic Gold Medal-winning swimmer. Choo conducts workshops, and remarked that many of his students were able to land spots in polytechnic animation courses from which they were rejected a few years earlier.

Ríos described the current popularity of comic book movies as a “dream come true”, having read a lot of superhero comics in her childhood and named Captain America: The Winter Soldier as her favourite. However, she also added that she is beginning to feel a little fatigued “because there are starting to be so many of them”. Ríos cited Katsuhiro Otomo, famed for writing and illustrating the Akira manga, as main the artist who inspired her to create comic art. Ríos’ credits include the fantasy horror western Pretty Deadly, written by Kelly Sue DeConnick, and Marvel Titles Doctor Strange and The Amazing Spider-Man. Ríos and Lim met at an art workshop and became best friends – the duo are collaborating on the fantasy series Mirror, published by Image Comics.

Spencer listed Brian Michael Bendis, Keith Giffen, Peter David and Chris Claremont as inspirations. Spencer was the subject of much ire and raised plenty of eyebrows when he penned the controversial issue Steve Rogers Captain America #1, revealing the good Captain as a Hydra spy. The mystery behind the shocking twist has since been explained, but some fans didn’t wait before sending death threats Spencer’s way. Spencer explained that unpopular story arcs are part of any comic character’s ebb and flow over the decades, making reference to the Winter Soldier story arc by Ed Brubaker that was once reviled for bringing Captain America’s loyal sidekick Bucky Barnes back from the dead and making him into a villain, remarking “People had to live with Bucky being a bad guy for a year!”

Ríos, Lim, Spencer and Kaiser were presented with a tasting platter of Singaporean food. While Lim was familiar with the cuisine since she’s from neighbouring Malaysia, it was a novel experience for the rest of the panel. They sampled salted egg yolk croissants, mooncakes, egg tarts, bubur cha cha (a coconut milk sweet soup) and Hainanese Chicken Rice. It went over well – Kaiser visibly enjoyed the mooncakes, while Ríos exclaimed “I could live here!”

The artists performed demonstrations for the press: Lin drew a journalist clad in a Pikachu hoodie, Ríos and Lim painted stunning ink and watercolour pieces side-by-side, while Kaiser customised a blank Munny doll with micron pens.

STGCC 2016 is being held from Saturday 10th September to Sunday 11th September. One-day passes are priced at $19, with two-day passes at $28. Please visit www.singaporetgcc.com for more information.