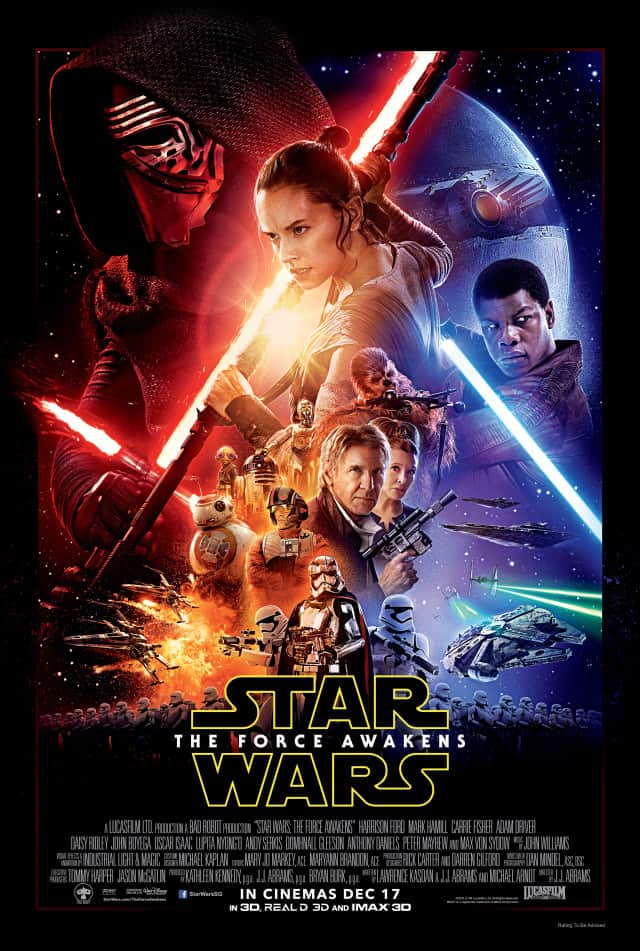 We’re well aware that this is one of the most pointless reviews we’ll ever publish. You’re all going to see this movie, you want to stay spoiler-free, you don’t want to read on regardless of how much we promise to consciously omit crucial plot details. It doesn’t matter; we’ll be okay. We love you; you know, yadda yadda.

Still here? Awesome! Okay, so it’s 30 years after the events of Return of the Jedi and an evil regime following in the footsteps of the Empire named The First Order has arisen. The astromech droid BB-8 is carrying vital information that Kylo Ren (Driver), a dark warrior who is the tip of the First Order’s spear, is in pursuit of. Scavenger Rey (Ridley), defecting Stormtrooper Finn (Boyega) and ace pilot Poe Dameron (Isaac) are all drawn into the conflict. Our heroes meet up with Han Solo (Ford), Chewbacca (Mayhew), General Leia Organa (Fisher), C-3PO (Daniels) and R2-D2. Leia is the leader of the Resistance against the First Order, who are developing a deadly superweapon in the form of Starkiller Base. General Hux (Gleeson), the leader of the base, is itching to unleash its power. Secrets will be uncovered and destinies will be fulfilled as good rises against evil in the grand Star Wars tradition. 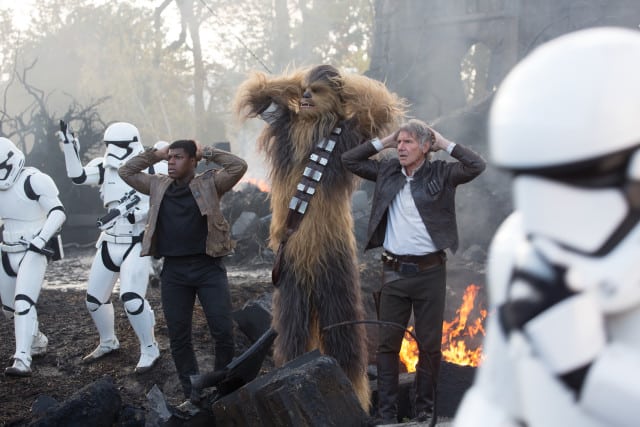 The very microsecond this new Star Wars film was announced, expectations and hype began building, reaching critical mass over the last few months. Even in this age of mega-blockbusters, few movies have arrived bearing such an enormous burden, with so much to live up to and so much to atone for. Ideally, The Force Awakens should sweep the audience up, taking them along for the ride, making them look beyond the labour that has gone into its conception and execution. In this regard, the film is largely successful. Director J.J. Abrams has strived to recapture the magic of the original trilogy, and its essence has been preserved. Where the prequel films belied a preoccupation with gee-whiz technology over compelling storytelling or genuine thrills, The Force Awakens possesses a crucial forward momentum, a genuine emotional core and a welcome humanity.

Abrams is fully cognisant of the honour bestowed upon him, yet this doesn’t feel like a film made by a director who is scared. The Force Awakens is very respectful of the venerated original trilogy and if anything, sometimes echoes A New Hope and bits of The Empire Strikes Back too strongly. There are many scenes that mirror ones from those earlier films almost beat for beat, but the exuberant energy that permeates The Force Awakens helps to keep it from feeling too slavish. Where the prequels were criticised for often jarringly stilted dialogue, the screenplay by Abrams, Lawrence Kasdan and Michael Arndt absolutely works. Han and Leia sound like we remember them, the nods to iconic lines are just obvious enough and there’s a wit and tonal assurance with the humour that comfortably eases the audience back into that wonderful original trilogy mode. Hearing those John Williams motifs again, plus new music from the master composer, brought the chills on big time for this reviewer.

Just as it is with the story, there must have been multiple considerations to bear in mind with regards to the design. It’s got to be close to what we remember, what we love, but not too close. There is a satisfying tactility to The Force Awakens and Abrams’ decision to favour practical in-camera approaches to the effects work whenever possible does pay off. Elaborate animatronics, guys in suits, special effects makeup, that’s the good stuff. The digitally-rendered characters portrayed by Lupita Nyong’o and Andy Serkis via performance capture do not stick out as jar(jar)ringly as some of the characters in the prequels did.

The spherical astromech droid BB-8 is a true triumph of design, becoming an iconic character even before the film’s release because of how cleverly it’s been conceived. BB-8 was an actual physical prop on set, and the dynamism in its movement and how much expression the droid can convey via beeps and whistles and a slight tilt of its head does feel authentically Star Wars-y. Since most of the ships riff on established designs, we don’t get any particularly inventive spacecraft, but that’s fine because everything just looks so good. The action sequences are kinetic but easy to follow and a chase scene between the Millennium Falcon and a TIE Fighter squadron in the planet Jakku’s atmosphere is one of the most gripping of the entire series.

There was a simplicity and purity about Star Wars that made it so easy to get into, before the cinematic universe expanded to a daunting, intricate extent. The new characters introduced are archetypes through and through, but that doesn’t mean they’re boring ciphers. Ridley’s Rey is a resourceful, capable female lead and it’s to the relative newcomer’s credit that her performance doesn’t yell “look at me, I’m a resourceful, capable female lead!” every other second. Her hardscrabble existence and dusty home planet remind us of Luke Skywalker in A New Hope, but she comes into her own at a quicker pace. As the Stormtrooper who decides he no longer wants to be in service of the bad guys, Boyega has a likeability about him and displays some excellent comic timing. Isaac has often been cast in villainous roles, but he wears the part of the old-fashioned swashbuckling hero well, relishing the chance to yell “woo-hoo!” as his X-Wing swoops out of the sky.

Seeing Ford reprise the role of that loveable scoundrel and seeing him do so with such willingness and conviction is an almost unspeakable joy. This is exactly the same Han Solo we know and love, with all the smirking and wisecracks feeling entirely appropriate. At the same time, there is a sweetness, sincerity and maturity in his interactions with Leia that is actually touching. Fisher brings a dignity and a quietly commanding presence to General Leia and seeing the pair back on the screen does feel like a big warm hug. Chewbacca is on hand to provide actual big warm hugs, too. Where is Luke Skywalker (Hamill)? We’re not going to answer that!

In the villains’ camp, Driver’s Kylo Ren has been shrouded in mystery, his true nature a closely guarded secret. There is the danger that he comes off as an ersatz Darth Vader, but this is somewhat justified in that Ren feels it is his duty to fulfil Vader’s legacy. There is a petulance to Driver’s portrayal of the character that sometimes veers dangerously close to Hayden Christensen’s pouty temper tantrums, but one can tell that there’s more going on beneath the surface with Ren. As General Hux, Gleeson does a lot of supercilious sneering and it harks back to Peter Cushing’s Grand Moff Tarkin in the most wonderful way. Christie’s Captain Phasma is a visually striking right-hand woman, but the character doesn’t have too much to do. Similarly, Indonesian martial artists/actors Yayan Ruhian, Iko Uwais and Cecep Arif Rahman make only the briefest appearance as members of the criminal Kanjiklub Gang. There are many characters to juggle as it is, but the film’s woeful underuse of Max von Sydow in particular is a shame. 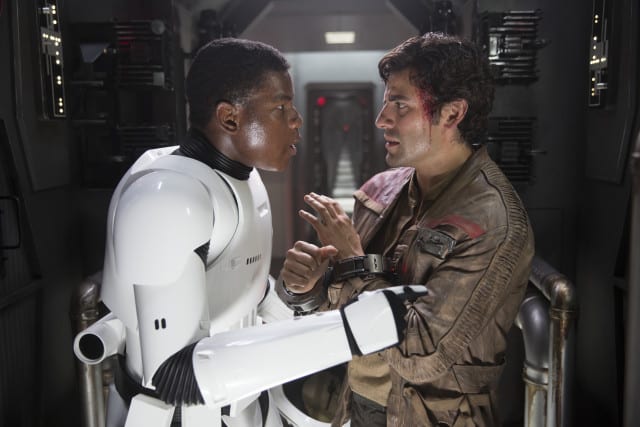 This is Star Wars in the same great original flavour we know and love. While there’s some rehashing going on, there are just enough new moves to keep audiences on their toes, while reminding them of what made those original three movies so spellbinding. This being the starting point for a new trilogy, there are plot threads that remain unresolved and there are tantalising hints of what’s to come in the sequel. While perhaps not 100% satisfying, Abrams has crafted a movie that is truly worthy of the name “Star Wars”. There are bound to be audiences this won’t please, but for this reviewer at least, The Force Awakens is quality entertainment.

Summary: The story beats and character types are familiar, but in embodying the soaring adventure and heartfelt simplicity that made the original trilogy so great, The Force Awakens is worth the agonising wait.