Before you think we are mad going gaga and rara over an image of a clapper board, look closer and you’ll see why – it means filming has started, which means we’re getting closer? to December 2015, when the first of three new movies will be released. Yes mom, we’ll go eat our vegetables now… 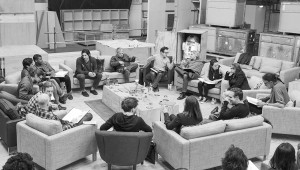 May the Force be with you, them, and us!