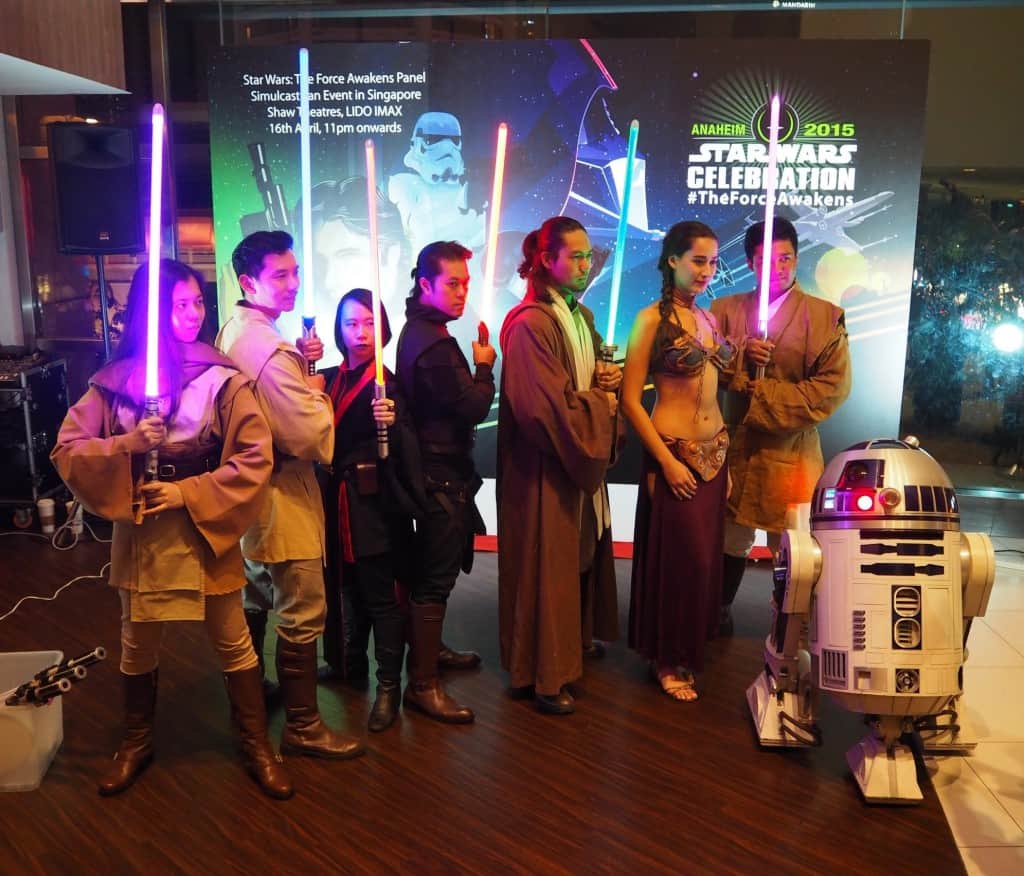 Over 400 eager Star Wars fans were huddled in the IMAX hall at the Shaw Lido Cineplex in the wee hours of Friday morning. They were undeterred by the lateness because the anticipation far outweighed any fatigue. Singapore was one of 23 countries selected to join the Celebration, held from April 16-19 at the Anaheim Convention Centre in California. Tickets for the Singapore fan event were all taken within 20 minutes. 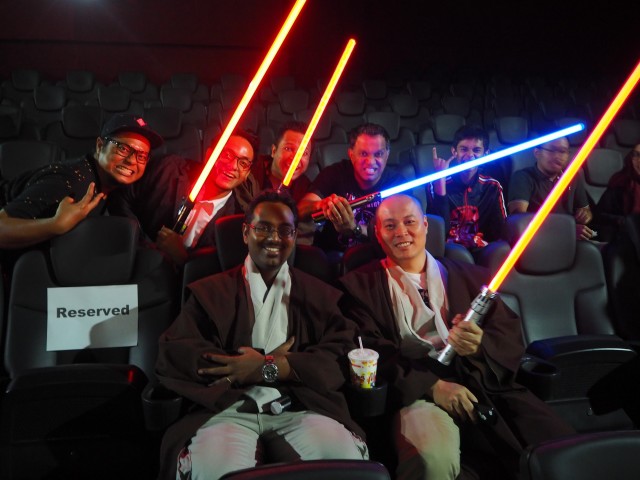 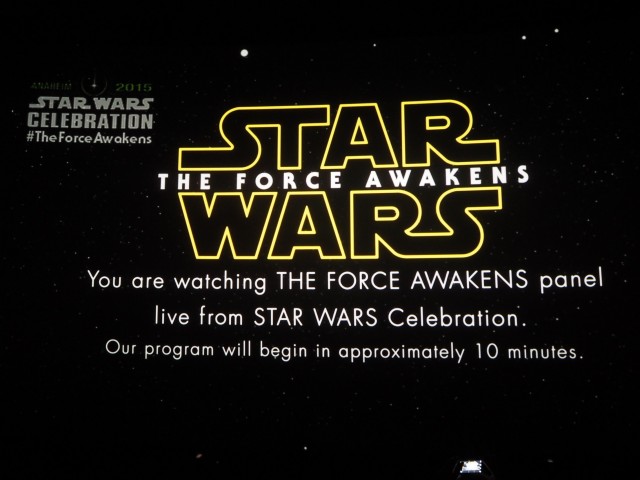 Before the live streaming began at 1 am Singapore time, fans took pictures with cosplayers, including Stormtroopers from the Singapore Garrison of the 501st Legion. The performers from Fightsaber also demonstrated their Jedi combat technique. Those who knew the answers to questions like “what was the rare element being mined on Cloud City” won prizes sponsored by Hasbro and GnB Comics.  Even though it was past their bedtime, several Jedi Younglings were present, part of the next generation of Star Wars fans. 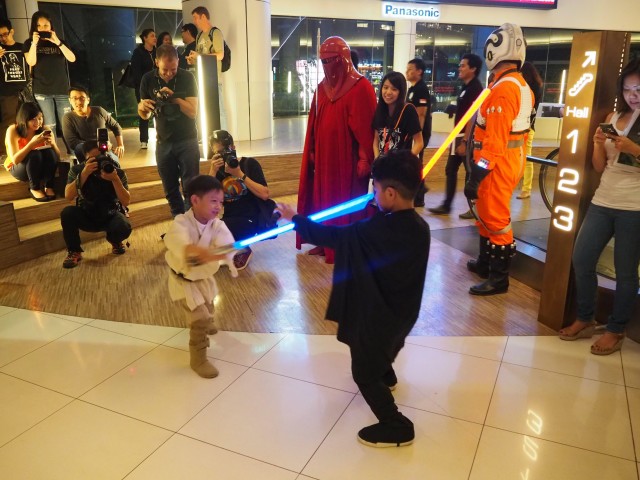 The panel was moderated by Anthony Breznican, senior writer for Entertainment Weekly. The crowd in the Anaheim Convention Centre were joined by multitudes more of their brothers and sisters in the Force from around the world, watching the live stream. Abrams recounted his childhood memories of the Star Wars franchise, saying “11 was a great age to have my mind blown,” emphasising the immersive nature of the world created by George Lucas in those original films and the sentiment of hope woven into them. 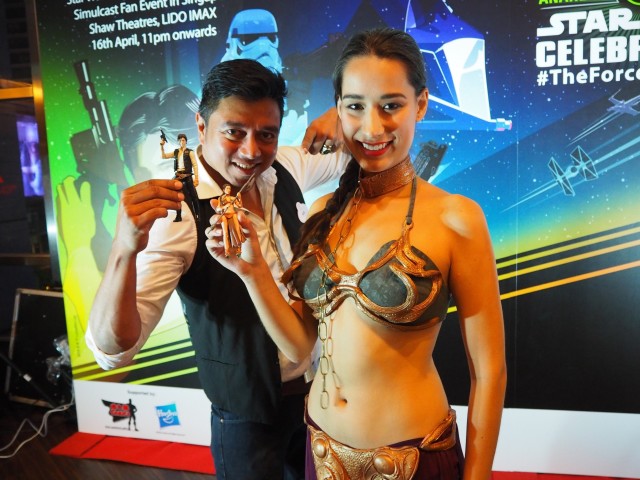 Kathleen Kennedy, who took over as head of Lucasfilm, called spearheading the new Star Wars movies an “incredibly daunting task”, but she had the experience of working on the Indiana Jones films and many other major motion pictures under her belt. Kennedy also promised more female characters in prominent roles for Episode VII and beyond.

Lee Towersey and Oliver Steeples, the mechanics in charge of bringing loveable droid R2-D2 back to the big screen, were welcomed onstage. Towersey and Steeples are examples of “promoted fanboys”, as it was their work in building functional replica droids that caught Kennedy’s attention and got them the plum gig. Abrams’ emphasis on an old-school approach using in-camera elements as much as possible was met with whoops of approval from the crowd. It was assumed that BB-8, the spherical droid seen in the first trailer, was a computer-generated creation. Therefore, the crowd was awestruck when a practical BB-8 rolled onto the Celebration stage, its “floating” head seemingly defying the laws of physics.

The three newcomer protagonists of Episode VII were next to take their seats at the panel. John Boyega, Oscar Isaac and Daisy Ridley – or Finn, Poe Dameron and Rey – all expressed their enthusiasm for the project and how star struck they were on the set. Boyega recounted how he wanted Harrison Ford to autograph his action figure of Han Solo in stormtrooper disguise. Ford grumbled “this is weird, but I’m signing it for you.”

The actors revealed a little more about each of their characters. Rey is a scavenger who lives on the desert planet Jakku (not Tatooine as fans initially thought), leading a solitary existence hunting for machine parts, when she meets another character and is flung into an epic adventure. Boyega remained vague on whether his character Finn was indeed a stormtrooper who had defected and joined the side of good, but that seems the most likely scenario. Finn crosses paths with Poe Dameron, an ace pilot sent on a mission by “a certain princess”.

A procession of stormtroopers then marched onto the stage. The stormtroopers, grunts of the Imperial army, are familiar to all Star Wars fans, but these sport a new look which seems inspired by the original designs of the late concept artist Ralph McQuarrie. Anthony Daniels, Carrie Fisher, Peter Mayhew and Mark Hamill – or C-3PO, Princess Leia, Chewbacca and Luke Skywalker – rounded out the panel onstage. Hamill acknowledged what he called the “UPFs” – “Ultra Passionate Fans”. Mayhew, who used a replica of Luke’s lightsaber as a walking stick, said it was nice to get back into that familiar, furry suit. Carrie Fisher, who carved out a career as a screenwriter, dropped the slightly naughty line “thank you for playing with me”, in reference to the Princess Leia action figures many of the fans owned. 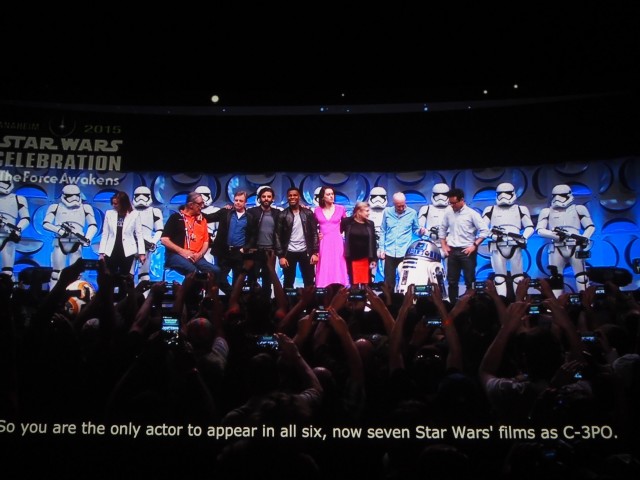 Finally, Abrams and Kennedy presented the pièce de résistance – the second full trailer for Star Wars Episode VII: The Force Awakens. We panned across the barren landscape of the planet Jakku, a crashed X-Wing fighter in the foreground and looming in the background, the massive carcass of a derelict Star Destroyer. “The Force is strong in my family. My father has it, I have it, my sister has it, you have that power too,” Luke Skywalker says in voiceover as we glimpse the remnants of Darth Vader’s helmet. The trailer offers up exciting, awe-inspiring visuals including X-Wings skimming the surface of a lake, TIE Fighters screeching in pursuit through the crashed Star Destroyer, a Nazi-like assembly of stormtroopers and our heroes running away from an explosion.

But it was the final scene of the trailer that truly sealed the deal.

Han Solo, older but still clad in that trademark vest, stands in a hallway within the Millennium Falcon alongside his trusty Wookiee co-pilot.

By the time the proceedings had concluded, it was 2:30 am, but buzzing with excitement, nobody would get much sleep that night.

We did indeed feel like we were at home, sharing this great thrill with fellow fans, and the lead-up until Star Wars Episode VII hits theatres on 17th December has just gotten that much more tantalising.