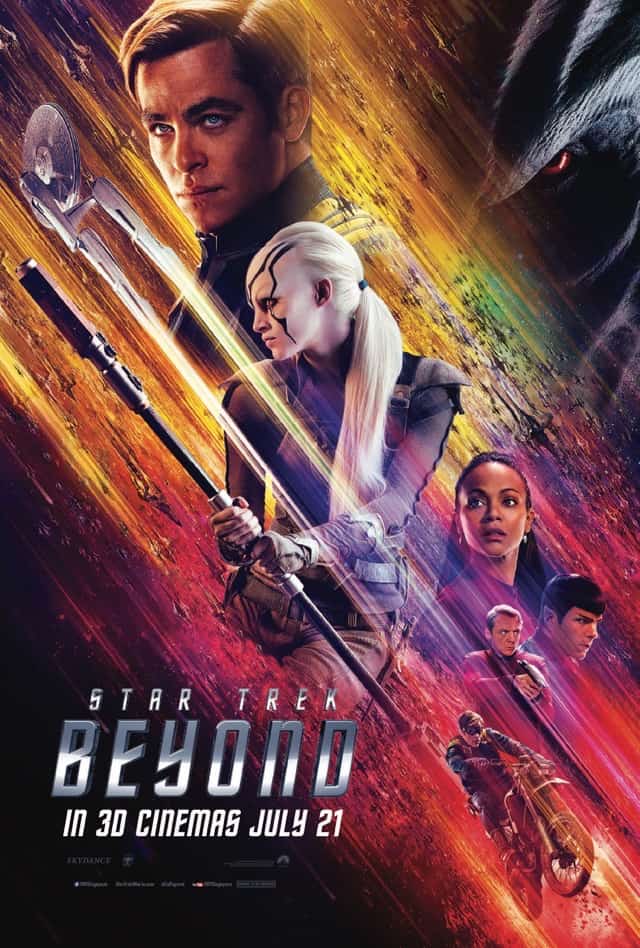 The crew of the U.S.S. Enterprise are marooned in the third instalment of the rebooted Star Trek movie series. It is three years into the Enterprise’s five-year deep space exploration mission, and Captain James T. Kirk (Pine) is beginning to feel fatigued. Kirk, Commander Spock (Quinto), Lieutenant Nyota Uhura (Saldana), chief engineer Montgomery “Scotty” Scott (Pegg), medical officer Dr. Leonard “Bones” McCoy (Urban), helmsman Lieutenant Hikaru Sulu (Cho), navigator Ensign Pavel Chekov (Yelchin) and the rest of the ship’s crew arrive at the Federation’s new Yorktown space station for a well-deserved break. However, they are abruptly called into action again on a rescue mission, and are suddenly besieged by an unknown enemy. The ruthless alien Krall (Elba) is after an artefact held aboard the Enterprise, and stranded on the planet Altimid with no means of escape, the crew must fend for themselves. Luckily, they have the help of a warrior named Jaylah, who has a long-standing vendetta against Krall.

The rebooted Star Trek films, 2013’s Star Trek Into Darkness in particular, have proven divisive amongst audiences. Stalwart fans of the originals 60s TV show decry the reboots as being too action-oriented and straying from the spirit of Gene Roddenberry’s sci-fi creation, while general audiences and the majority of critics have lauded the films for revitalising the franchise. Owing to his duties helming the seventh instalment of that other sci-fi juggernaut, J. J. Abrams passes the directorial baton on to Justin Lin of Fast and Furious fame. Screenwriting duo Roberto Orci and Alex Kurtzman, who have not exactly been popular amongst fans, are replaced by Simon Pegg and Doug Jung. Star Trek Beyond is very much a straightforward adventure, close enough to the spirit of the original series, while also showcasing the wham-bam action spectacle Lin has become known for.

Star Trek Beyond does feel a little scaled down from Into Darkness, but that’s not necessarily a bad thing. There’s still an epic sweep here: we’re treated to a jaw-dropping establishing shot of the gleaming, futuristic bauble that is the Yorktown space station, accompanied by a stirring, uplifting score from composer Michael Giacchino. The scene in which Kirk pulls off some rad motorcycle stunts did induce its share of eye-rolling when it was glimpsed in the trailer, but it doesn’t feel out of place in the movie itself. The climactic zero-g melee is reasonably inventive too. The destruction of the Enterprise is suitably intense and dramatic, but is marred by an overuse of shaky-cam, which affects most of the close quarters fights in the movie.

The biggest shortcoming here is the central villain Krall. One can’t help but feel that the layers of prosthetic makeup somewhat diminish Elba’s innately towering presence, and as a brutish baddie chasing a MacGuffin that our heroes have in their possession, he’s a somewhat generic action movie villain. Say what you will about the big twist in Into Darkness, but Benedict Cumberbatch’s performances was that film’s centre and was nothing short of electrifying. Yes, there is an element of mystery to Krall, but when his back-story is revealed, it can’t help but come off as underwhelming.

Fortunately, Star Trek Beyond makes excellent use of its returning characters. The cast for Star Trek ’09 remains one of the finest remake/reboot casts ever assembled, with each actor grasping the essence of those iconic figures without doing a mere impression. The camaraderie and banter amongst the crew continues to feel earnest. Urban’s cantankerous Bones has always been this reviewer’s favourite character in the rebooted films, and here, he gets to steal the show on multiple occasions, with Urban delivering several side-splitting lines. Pine is allotted multiple moments to be the dashing action hero, while Quinto masterfully parses the humour inherent in Spock’s obtuseness and the character’s dedication to the crew.

There has been considerable furore surrounding the decision to establish Sulu as gay in this continuity, with original Sulu actor George Takei himself being one of the biggest opposing voices. In the film, we see Sulu greeted by his husband and their young daughter as he arrives at Yorktown spaceport. It’s a sweet scene and is really no big deal. The passing of Leonard Nimoy, who originally played Spock and appeared in the first two reboot movies as Spock Prime, is handled with admirable sensitivity within the film. The ending credits include dedications to both Nimoy and Anton Yelchin, who recently died in a freak accident. We missed Spock Prime, and will definitely miss Chekov when the fourth film arrives.

Jaylah was apparently inspired by Jennifer Lawrence’s character in Winter’s Bone (say the name ‘Jaylah’ out loud). The character’s design is striking and Boutella, best known as Gazelle in Kingsman: The Secret Service, possesses the requisite physicality to play the badass warrior. Unfortunately, the character can’t help but come off as a standard-issue tough, resourceful woman at times – a studio-mandated ‘strong female character’. That said, Jaylah feels like a natural addition to the Star Trek universe and allows Boutella to further exhibit the star quality which served her so well in Kingsman.

Star Trek Beyond is generally entertaining and thrives on the excellent chemistry this particular cast has fostered, but it does tend towards the generic. There aren’t too many surprises in store, but Lin’s valuing of the emotional beats in addition to the action does benefit the tone. It’s also reasonably self-contained, and newcomers unfamiliar with volumes of Trek lore won’t feel left out.

Summary: Star Trek Beyond strives to reach a compromise between the feel of the original series and the rebooted films, generally succeeding in this regard. A lack of surprises and an uninteresting villain are made up for with entertaining character dynamics and well-executed action.