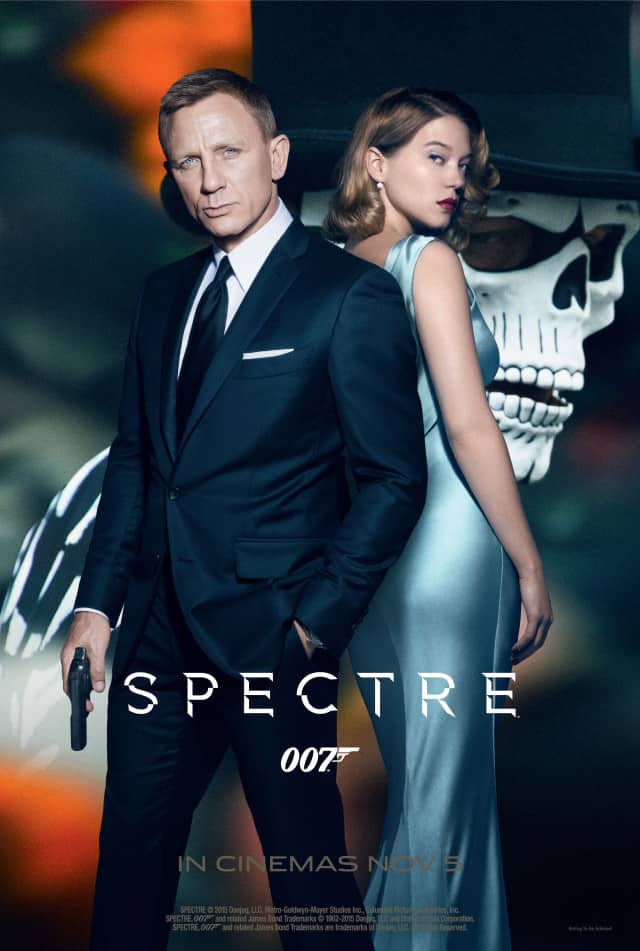 The world’s greatest superspy returns to tackle his most dangerous foe yet in the 24th Bond film. While in Mexico City, James Bond (Craig) discovers the existence of a shadowy terror network known as “Spectre”. Back home, Bond’s boss M (Fiennes) is locked in a power struggle with Max Denbigh aka “C” (Scott), head of the Joint Intelligent Service who aims to abolish the Double-O program. Bond’s allies Q (Whishaw) and Moneypenny (Harris) render their support as Bond pursues Spectre. Through Lucia Sciarra (Bellucci), the widow of a Spectre hitman, Bond finds his way to a figure from his distant past, the sinister Franz Oberhauser (Waltz). Bond must protect Dr. Madeleine Swann, a psychologist with familial links to Spectre who’s working at an exclusive private clinic in the Austrian Alps, from Oberhauser and his hulking henchman Mr. Hinx (Bautista). As the staggering reach of Spectre’s tendrils become apparent, Bond races against the clock to prevent Oberhauser from enacting his devastating schemes. 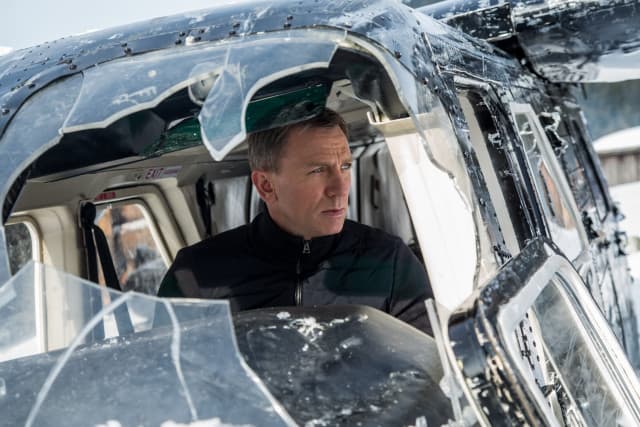 After winning a long legal battle known as the “Thunderball copyright ownership controversy”, the Bond movie producers finally secured the rights to depict the criminal organisation Spectre, integral to the Bond mythos. Fans were excited at the prospect of seeing James Bond come face to face with the éminence grise apparently lurking behind the shadows since the events of 2006’s Casino Royale. Skyfall director Sam Mendes returns for Craig’s fourth outing as 007, and it is evident that he is trying to hit as many mile markers associated with classic Bond as possible. Craig appears in a white tuxedo for the first time, there’s a scene set in a snowy locale, a scary henchman in the Oddjob and Jaws mould and a tricked-out Aston Martin. Sure enough, there are many moments in Spectre that made this reviewer cheer, but alas, after the smoke clears, it seems that the film adds up to less than the sum of its parts. 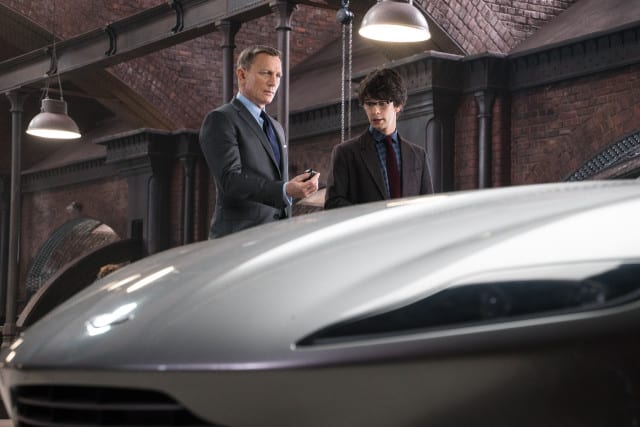 On the level of spectacle, Spectre certainly is an accomplishment. Cinematographer Hoyte van Hoytema, succeeding Skyfall’s Roger Deakins, crafts many shots that are striking in their elegant composition and breath-taking in their scope. The film’s pre-title sequence begins with a long tracking shot which follows Bond and his companion Estrella (Stephanie Sigman) through a massive procession as part of the Day of the Dead celebrations in Mexico. Second unit director Alexander Witt and stunt coordinator Gary Powell, both Bond veterans, assist Mendes in assembling major eye candy set pieces including a skirmish to the death aboard a helicopter spinning out of control, a car chase that roars through the streets of Rome and a spectacular plane vs. Land Rover convoy battle in the Austrian Alps – not to mention the single largest explosion ever detonated for a film. This reviewer, along with the majority of Bond fans, doesn’t fully enjoy Writing’s on the Wall, the rather limp theme song performed by Sam Smith. Thankfully, the Daniel Kleinman-designed main titles do enhance its effectiveness. However, there is some imagery that undermines the overall haunting effect of the sequence: expect to hear some tittering from audience members cognisant of Japanese tentacle erotica. 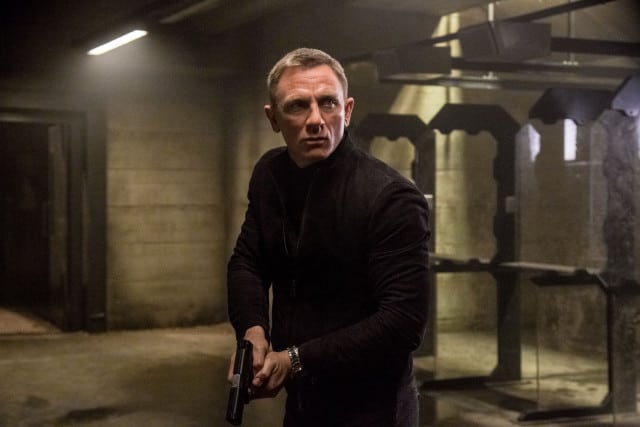 While Craig (in)famously told journalists that he’d rather slit his wrists than play Bond again, he delivers an intense, committed performance, with the character finally getting into the swing of things. As expected, he acquits himself well in the many action sequences and handles the moments of humour better than he did in Skyfall. His portrayal of Bond has sometimes been decried as too self-serious, so it is amusing to see him partake in several well-judged moments of levity that are almost Roger Moore-esque. There is some brooding, to be sure, but Bond gets right in the thick of it and stays there for the duration of the movie. 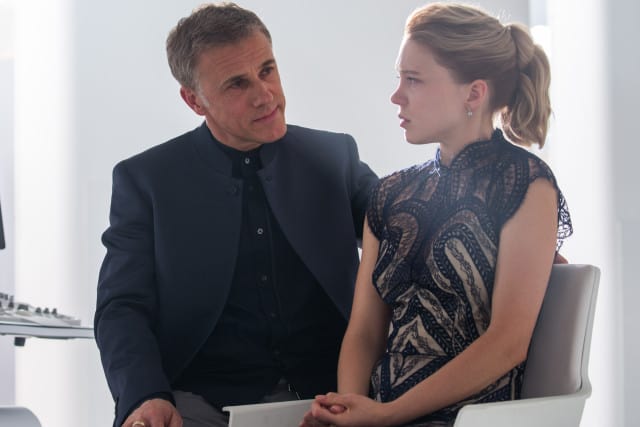 Christoph Waltz’s casting was met with much fanfare and speculation as to the true nature of his role. Waltz is fine as Oberhauser, but there’s very little here the Oscar-winner hasn’t done before in other roles and this reviewer was expecting him to have more of an impact. All of the primary villains in the Craig-starring Bond movies have been creepy European dudes, and Oberhauser is no exception. The Spectre meeting at an Italian palace, designed to evoke an arcane secret society ritual, is a genuine nail-biter of a scene and is marvellously acted by Waltz. However, when Oberhauser states his motivation, it is disappointingly contrived given all the build-up, since he’s been positioned as this ultimate baddie. Even though there’s obviously more to the character than is told to us in Spectre, the feeling of “wait, that’s it?” is pretty hard to shake. 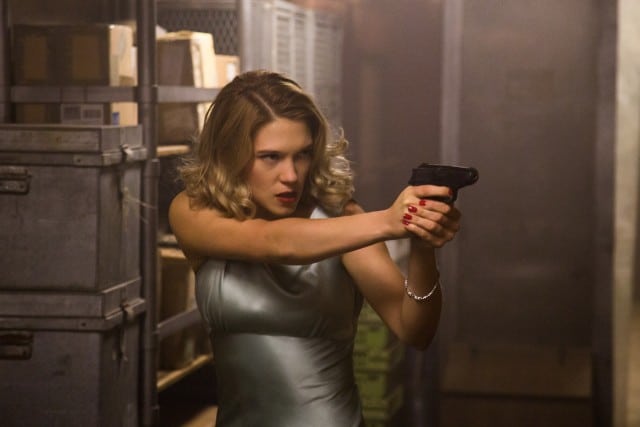 Seydoux’s turn as the lead Bond girl is understatedly affecting, even if the character isn’t one of the more memorable women in the Bond canon. With Madeleine Swann, screenwriters John Logan, Neal Purvis, Robert Wade and Jez Butterworth are aiming for a character who isn’t either extreme of “fragile wallflower” or “kicker of ass who can give Bond a run for his money”. Even then, the arc in which she is initially sceptical of and almost hostile towards Bond but eventually warms to his charms is very predictable. It is a wonder that the sultry, glamourous Bellucci hasn’t been in a Bond film until now, so it is even more of a let-down that she is criminally underused in an all-too-brief appearance. The Lucia Sciarra character is also little more than the “kept woman” archetype we’ve seen many times throughout the Bond films, from Domino Derval to Andrea Anders to Solitaire. 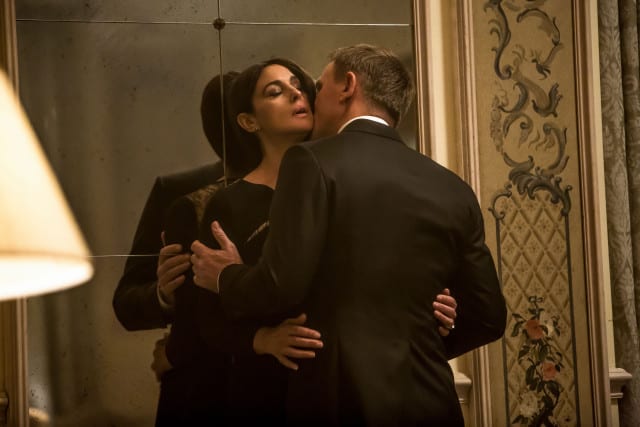 The support system of Bond’s allies M, Moneypenny, Q and Bill Tanner (Rory Kinnear) is integrated into the plot instead of coming off as ancillary, which is to Spectre’s credit. The crisis at MI6, secondary compared to Bond’s tangle with Spectre but still pretty serious stuff, is rooted in topical security concerns, with C planning an invasive universal surveillance program. Whishaw gets several humorous moments and Q does go out into the field in this one, but it isn’t taken too far (see Octopussy). Scott, best-known for playing the dastardly Moriarty in BBC’s Sherlock, is far more restrained here, which means the character is believable but often dull. Bautista as the silent, musclebound Hinx is excellent casting. Henchmen with silly gimmicks are one of the most often-parodied elements of Bond films, so it’s commendable that Bautista manages to hark back to that without taking one out of the movie by being silly. 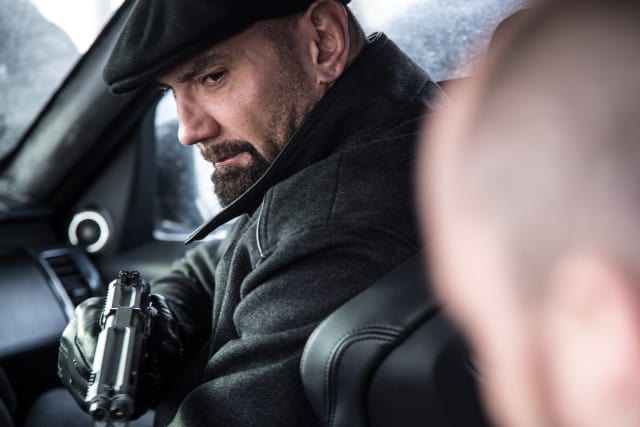 This reviewer found Spectre agonising, not because it’s a bad film – not by a long, long shot – but because of how unsatisfying it is once one takes a step back. There are a few references to Bond films past that cross the line from “cute” to “smug”. In the moment, it is entertaining and thrilling and there are action sequences which stand up to the most memorable in the series, but the overarching plot, especially where it pertains to the villain, leaves a fair amount to be desired. For a film that hits so many high points, true, sublime greatness remains out of Spectre’s grasp.

Summary: There are thrills and instantly classic scenes galore, but on peeling back the layers of Spectre, it isn’t quite the ghost with the most.