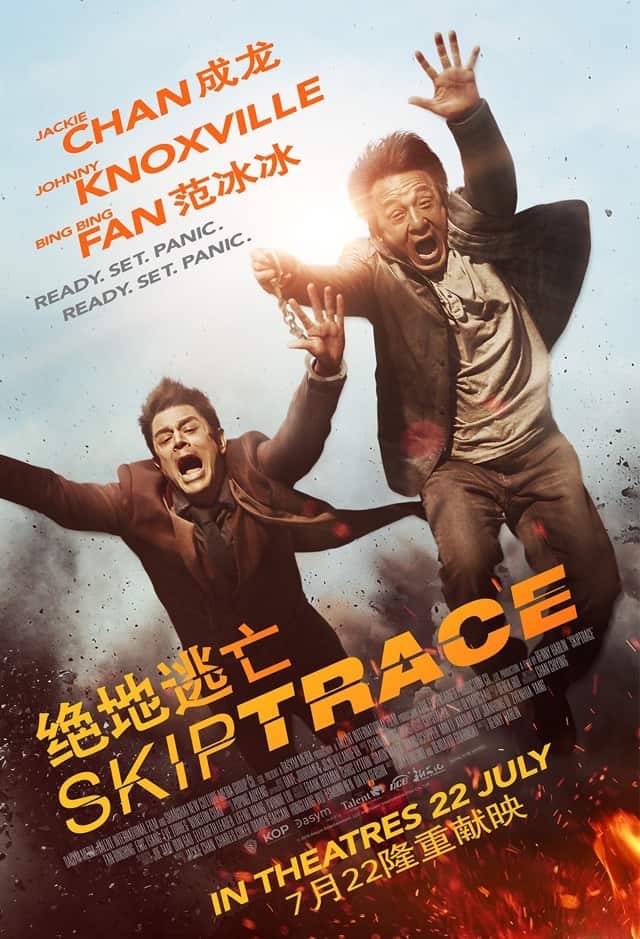 The boy who cried wolf would be really great friends with the actor who cried “I’m retiring from action movies.” Jackie Chan knows which side his bread is buttered on, and is back in another action comedy, playing Hong Kong cop Bennie Chan (Chan). Following the death of Bennie’s partner (Tsang), Bennie has been pursuing billionaire Victor Wong (Zhao), whom he believes to be a criminal mastermind known as ‘The Matador’. Bennie has been caring for his partner’s daughter Samantha (Fan), the head of guest relations at a casino in Macau who gets mixed up with Victor’s thugs. Wheeler-dealer American gambler Connor Watts (Knoxville) happens to be in the casino at the same time, accidentally coming into possession of evidence that could prove Victor’s guilt. Bennie tracks Connor down to Russia, freeing him from Russian mobsters so Connor can be taken back to Hong Kong to testify against Victor. With Samantha in danger, Bennie and Connor become unlikely partners, traversing across China and racing against the clock.

Skiptrace hasn’t had a particularly smooth production process: Sam Fell was initially set to direct the film but was replaced by Renny Harlin, Seann William Scott dropped out for Johnny Knoxville to take his place, and cinematographer Chan Kwok-Hung drowned off Lantau Island on the set of the film. Jackie himself had a near-death experience filming in a roaring Guilin river. There’s an awkward herky-jerkiness to the pacing of Skiptrace, and teaming Jackie up with a fast-talking American sidekick couldn’t reek more of Rush Hour’s leftovers if it wanted to. The plot is cliché-ridden and while there are several action sequences which showcase Jackie’s signature prop comedy fighting style, these seem awkwardly slotted in instead of unfolding organically within the plot. A fight in a Russian packing plant that sees Jackie use an oversized Matryoshka doll to fend off ex pro-wrestler Eve Torres’ generic henchwoman is moderately fun, but serves more as a reminder of Jackie’s past glories than anything else.

Picturesque locations including China’s Guangxi and Guizhou Provinces and parts of Mongolia add a travelogue element to the bog-standard buddy action comedy premix. Bennie and Connor get mixed up with locals and are both fishes out of water as they wander through the middle of local festivals, traverse raging rapids on a raft made from inflated pig skins and play drinking games with Mongolian tribespeople. It all looks intended to make Western audiences exclaim “Oh, how exotic!” Even then, Skiptrace often looks embarrassingly cheap. A sequence in which Bennie and Connor escape their pursuers via zipline features some painfully subpar green screen work.

Jackie’s no-nonsense detective driven by revenge, who is encouraged to loosen up throughout the film, is quite the bore. “It’s all the same: cop from Hong Kong, cop from China,” Jackie bemoaned of his Hollywood film roles in an interview he gave in 2004. How little things change. Knoxville gets stuffed into a trashcan, splashed with mud and has a horse defecate mere inches from his face, but then again, the former Jackass star is probably best friends with indignity. The wily American who tries to talk his way out of everything is a tired trope that Skiptrace fails to put even the slightest spin on. The dynamic between the two characters is predictable: chalk and cheese have to become unwilling partners to stay alive, overcoming initial distrust of and dislike for each other. A large amount of the comedy falls flat, but the emotional beats are absolutely dead on arrival, and there’s nothing with either of these characters for the audience to grab on to. There is a bit when Jackie performs quite the unexpected cover of a hit song that did bring a smile to this reviewer’s face.

Despite getting third billing behind Jackie and Knoxville, Fan’s time onscreen is brief and she plays little more than the damsel in distress. The cardboard villains (thugs in business suits, tattooed Russian street toughs, a corrupt official or two) are unable to amount to compelling challenge for our heroes. While Harlin’s earlier filmography includes the relatively entertaining likes of Die Hard 2 and Cliffhanger, he’s also responsible for such infamous bombs as Cutthroat Island and The Legend of Hercules. With Skiptrace, it seems like Harlin was putting together a flat-packed Ikea-esque action comedy but missed a few steps during assembly. In the grand scheme of things, the 120-minute running time is far from merciless, but this still comes off as a slog rather than a romp.

Summary: Sure, it’s impressive that Jackie Chan’s still kicking at 62, but Skiptrace feels long past its sell-by date, laboured and clumsily made instead of light on its feet.