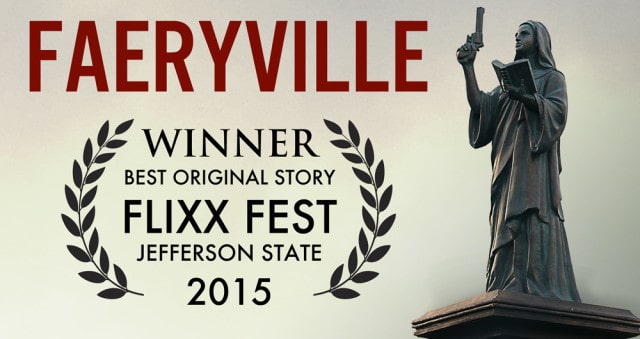 INRI Studio’s Faeryville is the Winner of the Best Original Story Award at the Jefferson State Flixx Festival in Scott Valley, USA. The film directed by Singapore independent filmmaker Tzang Merwyn Tong was screened on the 28 September, one day before the FLIXX Awards Ceremony.
“It’s a great underdog story and really captivated our screening committee,” says Megan Peterson, FLIXX Festival Founder and Director.
“Faeryville goes against the American idea of fighting for what you believe in.” says Jason Watts, a member of the audience. “It talks about how we could all be wrong, and how things can get crazy when ideologies come to clash.”
FLIXX Festival is recognized as the premier film festival of the mythical 51st State of Jefferson, a region that is fighting for independence from as far back as 1850. As a festival, Flixx Fest seeks to showcase films that capture Jefferson State’s iconic values: rebellion, beauty, irreverence, vision and independence.
“I’m thrilled to receive this award. Faeryville is my most difficult work to date, both as a writer and director,” says Tzang Merwyn Tong. “It feels great to know that Faeryville is able to connect with audiences half way across the world, proving that good storytelling transcends boundaries.”
Meanwhile in Australia, Faeryville is also the Official Selection and Closing Night Film of the Brisbane Festival that ended this past weekend. It was screened as part of the Singapore Unbound Showcase at Griffith University, showing alongside Singapore films, Seven Letters, Saint Jack, Naked DJ and Snakeskin. The program was curated by Philip Cheah, ex-director of Singapore International Film Festival.
Faeryville is expected to have an international Video-On-Demand release later this year. Earlier in January this year, Faeryville made its Red Carpet World Premiere in Los Angeles, California to rousing reception and critical acclaim. Faeryville is represented by LA-based distributor Eleven Arts. The independent film had a limited theatrical release in Singapore, with several sold out screenings in May and June, amidst blockbusters like Mad Max and Tomorrowland.

INRI studio is an independent production house from Singapore, founded by cult director Tzang Merwyn Tong in 1999. The studio has produced three films; A Wicked Tale, e’Tzaintes and V1K1, all of which premièred to critical acclaim in the international film festival circuit. The studio’s mission is to create a platform for writers, storytellers, musicians and film-makers to come together to present alternative art forms to mainstream audiences. Their mantra – to provoke the senses and open the mind.