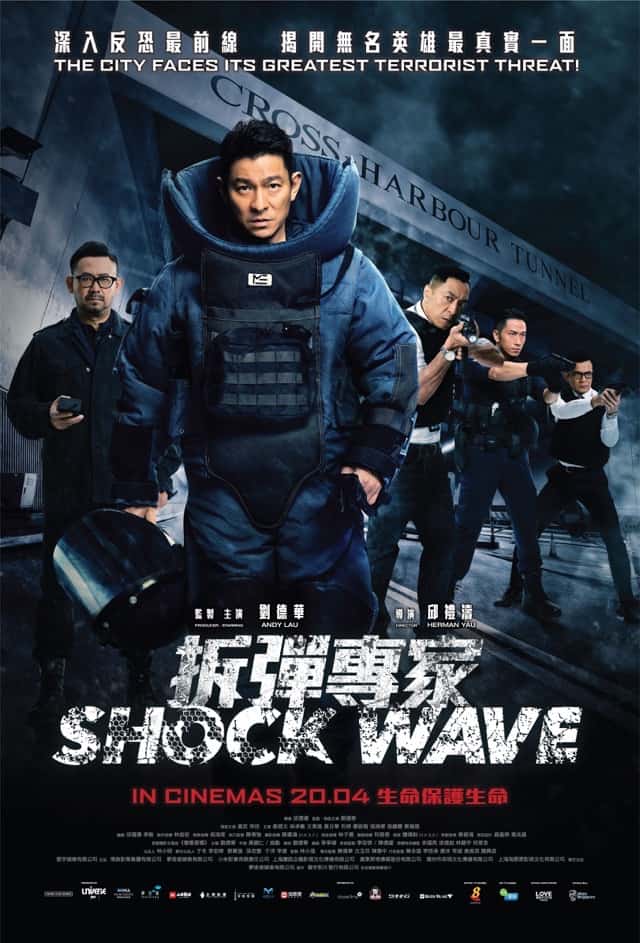 The original Chinese title of this action thriller translates to ‘Bomb Dismantling Expert’. Not quite as exciting as ‘Shock Wave’, but it is an accurate description of our protagonist, Cheung Choi-san (Lau). Cheung heads up the Explosive Ordnance Disposal Bureau of the Hong Kong Police Department. 18 months ago, Cheung went undercover as a member of notorious criminal Hung Kai-pang’s (Jiang) gang, and Hung has wanted revenge ever since escaping Cheung’s grasp. Now calling himself ‘Blast’, Hung toys with Cheung by planting several bombs for Cheung to defuse. This culminates with Blast rigging Hong Kong’s Cross Harbour Tunnel with explosives, the terrorist and his men holding hundreds of commuters hostage. As Cheung’s girlfriend Carmen (Song) awaits his safe return, the bomb defusal expert must face off against an unstoppable mad bomber, as the city braces for cataclysmic destruction.

Shock Wave reunites star and producer Lau with Herman Yau, who directed him in The Truth and Fascination Amour. As one would expect of a film about a bomb disposal specialist, Shock Wave does not skimp on the explosions. The production values pass muster, with a massive full-scale replica of the Cross Harbour Tunnel entrance built for the film. Alas, Shock Wave is also often patently ridiculous. The screenplay by Yau and Erica Li is packed with clichés, with the influence of various Hollywood action thrillers including Blown Away, Speed and The Dark Knight and all the Die Hard movies plain to see. The dialogue is overwrought, emotional scenes are all too maudlin, and when the film should be at its tensest, it’s unintentionally hilarious.

Lau is as suave and charming as he usually is, playing the confident bomb disposal expert. While there is a good amount of action and Lau had to don a bomb disposal suit weighing 31 kg, the role doesn’t require very much of him. Jiang’s villainous Blast is barely menacing, and not just because one is wont to snicker every time the name ‘Blast’ shows up in the subtitles. For all the innocent people who die by his hand, Blast just isn’t scary. He spends the bulk of the film flailing and yelling, when this film clearly requires a cool, droll antagonist along the lines of Alan Rickman’s Hans Gruber in Die Hard.

This reviewer often refers to the protagonist’s love interests in action movies as ‘the designated girlfriend’. Song’s Carmen is the designated-est girlfriend who ever girlfriended, barely registering as an entity in the film. She wants Cheung to say “I love you” to her, which he’s holding out on. Cue the eye rolls. Philip Keung plays Cheung’s blustery superior at the police department, spending most of the film throwing a conniption fit. His anger at the situation and his concern for Cheung’s well-being is supposed to be moving, but instead, Keung overplays it to a silly degree. Louis Cheng pops up as a friendly tour guide, lending the film some welcome humanity.

Shock Wave features several clever set pieces and some elaborate, thrilling stunts. There’s also a subplot about the financial impact of the hostage crisis and how the CEO of the firm that operates the tunnel stands to profit from the situation, which isn’t quite as derivative as the rest of the film. This fails to fully mitigate how formulaic the film is, compounded by how every time Yau tries for drama, he ends up with comedy instead. Even with a few surprises flung our way, Shock Wave is largely predictable and is too melodramatic to take seriously.

Summary: Shock Wave might boast grand set-pieces and Andy Lau in fine form, but it’s silly when it should be intense and is comprised of many familiar action thriller ingredients.