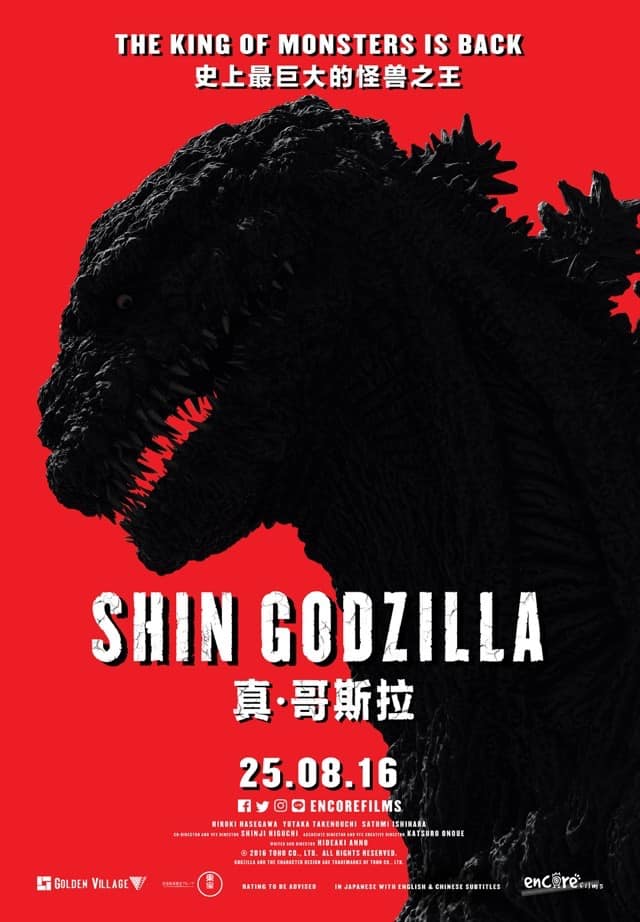 The king of monsters is coming home to roost in this reboot of the Godzilla franchise. The Tokyo Bay Aqua-Line floods and collapses, as cell phone video footage of a colossal unidentified organism rising from the ocean goes viral. The Japanese cabinet calls an emergency meeting, and the Deputy Chief Cabinet Secretary Rando Yaguchi (Hasegawa) is put in charge of handling the unknown threat. As the government evaluates their options, Kayoko Ann Patterson (Ishihara), the Special Envoy for the President of the United States and the daughter of a U.S. senator, enters the fray. Kayoko reveals that a disgraced zoology professor named Goro Maki had been studying the creature in secret, naming it ‘Godzilla’. As Japan is engulfed in the chaos the monster leaves in its wake, Yaguchi and his team have to devise a way to neutralise Godzilla, and time is not on their side.

It’s perfectly understandable that purists aren’t fans of Hollywood’s Godzilla movies, not even the decently-received 2014 film. The title ‘Shin Godzilla’ roughly translates to ‘true Godzilla’, as in ‘those other versions are false’. It’s the first Japanese Godzilla movie since 2004’s Godzilla: Final Wars. With this film, Japanese studio Toho is starting from scratch, depicting the first emergence of the iconic kaiju in modern-day Japan. Shin Godzilla is jointly helmed by Hideaki Anno and Shinji Higuichi. Anno, who also wrote the screenplay, is famed for creating the anime series Neon Genesis Evangelion, while Higuichi is one of Japan’s most prolific special effects directors and is the director of the live-action Attack on Titan movies.

The approach here is that of a procedural – the audience is given a bird’s eye view of the protocol that unfolds in dealing with a crisis, and there are moments when the film really gets into the minutiae of dealing with a large-scale catastrophe. This works both for and against Shin Godzilla: on the one hand, this largely straight-faced nose-to-the-grindstone tack gives the inherently outlandish premise a considerable degree of real-world grounding. On the other hand, audiences go to a giant monster movie to see, well, the giant monster. Any potentially awe-inspiring spectacle is strictly secondary to planning, strategy and delegation of tasks, with the politicians and bureaucrats outnumbering the monster roughly 1000 to 1. By the end of the film, this reviewer felt he had become intimately familiar with the 5th floor of the Japanese Prime Minister’s office.

Anno and Higuichi have several tricks up their sleeves when it comes to this new Godzilla’s physiology. Iconic design elements and powers that the creature is known to display are preserved, with a bit of a spin put on things. At the same time, it’s evident that these filmmakers have a love and respect for what’s come before, and fans of the classic Godzilla movies will recognise some particular music cues. Instead of the traditional man-in-a-suit technique, Godzilla is portrayed by Mansai Nomura via motion capture. There are bits of the design that we found a little awkward, chief of them being the giant unwieldy tail, and the short, skinny arms, with palms faced upward in a pose of perpetual puzzlement. While the visual effects work is spotty in parts, the destruction of Tokyo skyscrapers carries enough weight, and is far more convincing than the traditional knocking aside of miniature Styrofoam towers.

The standard ‘military vs. monster’ conflict that is a staple of this genre is in full effect here, with oodles of hardware on show. However, Anno is careful enough in devising the story such that it doesn’t come off as totally jingoistic, and a key plot point focuses on the participation of the Americans in battling Godzilla. When the last resort of nuking Tokyo is proposed, the bombing of Hiroshima and Nagasaki is brought up, but not in an emotionally manipulative manner. After all, in the original 1954 film, Godzilla himself was a metaphor for the nuclear destruction which was rained down on Japan. The 2011 Tōhoku earthquake and tsunami and the ensuing Fukushima nuclear power plant meltdown served as inspirations for this reboot. The massive toll that Godzilla’s emergence takes on Tokyo is given consequence, and the destruction doesn’t feel as hollow as in most effects-driven Hollywood disaster movies. It’s still far from subtle though: the line “man is more frightening than Godzilla” is uttered with nary a hint of irony.

Hasegawa’s Yaguchi is nominally our protagonist, but we don’t actually spend all that much time with him. A seemingly endless parade of officials and advisors from every branch of the government marches across the screen, and because there isn’t an everyman’s point of view, it can be difficult to get into the proceedings. Hasegawa is sympathetic and it’s easy to root for him to keep his composure under enormous pressure. Ishihara lends the ambitious and confident Kayoko a cheekiness and gives the film much of its energy, but it would have made more sense to cast a Japanese-American actress in the role, seeing as the character grew up in the United States. Ishihara noticeably struggles with the chunks of English dialogue she’s given, and admitted in a press conference that learning the lines was so frustrating that she was often on the brink of tears.

Shin Godzilla unfolds mostly in conference rooms and offices, but there’s enough momentum in the plot such that it’s interesting throughout, if not exactly riveting. As a ‘what if?’ scenario depicting how the Japanese authorities would deal with the sudden appearance of an unidentified giant monster, Shin Godzilla is broadly plausible. It is, however, disappointingly short on satisfying thrills.

Summary: It’s politicians and bureaucrats vs. a giant monster in this intelligent and thoughtfully-crafted but not particularly exciting or affecting Godzilla reboot.