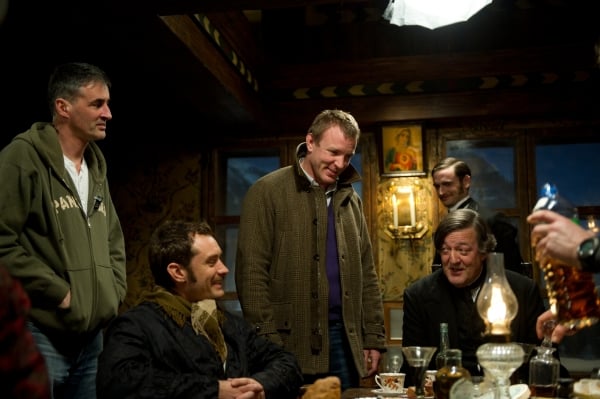 QUESTION: Robert, can you talk about this iconic character, what the challenge was for you to embody Holmes again and take it to another level, especially with the disguises?

ROBERT DOWNEY JR.: Well, after the first one worked out, we were pretty much doing the press tour talking about things we would like to improve, other directions we could go, blah, blah, blah.  And then there`s the reality of doing it. I mean, anybody who has ever been involved in making the second part to a first work, there should be a whole online support team for this.

There`s so much to learn. And, again, I think the greatest disguise was us disguising ourselves as consummate by-the-numbers professionals when in fact we`re all kind of incredibly eccentric. And Warner Bros. has given us the opportunity to try and do something that`s complicated and needs to tick a bunch of boxes and all that. And the great thing we had this time was Noomi and Jared.

QUESTION: Given the comic possibilities of the female disguise you wear in the film, any truth to the idea that you and Jude might take on Some Like It Hot?

ROBERT DOWNEY JR.: You know, the Mrs. referenced a while ago that it reminded her of Some Like It Hot.

SUSAN DOWNEY: No, just because of the look, we were discussing who he looked most like. Someone said â€˜The Joker.`  I said Tony Curtis in Some Like It Hot. That`s why it came up.

ROBERT DOWNEY JR.: Oh, and the lead singer from The Cure, Robert Smith.

QUESTION: Jared, what were your thoughts taking on this iconic role of Professor Moriarty?

JARED HARRIS: I was a fan of the first movie. You can see from the first film that they had taken such a fresh approach to how they were treating the characters and the period and the subject matter. It was exciting because you knew it had to be a reimagined version. It needed to be a different version of the character than you had seen beforehand.

It was a big mountain in the sense that Moriarty has to pose a formidable problem to Sherlock because if it`s just about defeating a paper boy on a paper route or something, it isn`t a big enough challenge. So, he has to be formidable in that sense.

How that was going to be achieved, I didn`t know. But I knew it had to happen.

QUESTION: For Hans Zimmer and Guy Ritchie, can you talk a little bit about the terrific score that you put together for this film and what that collaborative process was like?

HANS ZIMMER: â€˜You got any ideas, Hans?` I think that`s where it starts, right?

Okay, let me be moderately less flippant. I was reading the script and it says â€˜the gypsy fortune teller.` I phoned Guy and I go, â€˜Road trip.  We`ve got to do a road trip. We`ve got to go there. We`ve got to go and find out what this music is.` In the first one, I felt Robert would maybe embrace this idea that Sherlock had always played the violin. He always played Bach and all the classical stuff. And I thought, to use a line from the movie, â€˜widen your gaze.` I thought that Victorian times was about exploring the exotic beast. And maybe the character of Sherlock could be playing gypsy music.

But when I read the line about the gypsy fortune teller, I realized I knew nothing of that culture. So off we went. I took my team to eastern Slovakia. We went for a week. We would get up at 5:30 in the morning, get into our little van, and go from one settlement to the next. And the Romani people, to give them their proper name, live in such poverty. I mean, it was a shock entering these settlements, the shock of seeing outcasts, and then hearing them play and hearing this virtuosity and music and this unbelievable culture that was just screaming to be heard.

To cut a long story short, It was impossible to decide who, but we finally ended up with 13 players that we put on a bus.  We went to the base. I mean, it`s the proper thing. So, we went to Vienna and we just ensconced ourselves in a studio there for a while.

And language problems were impossible. They speak Romani. I speak German and English. My other violinist speaks Russian. But then, that old clichÃ