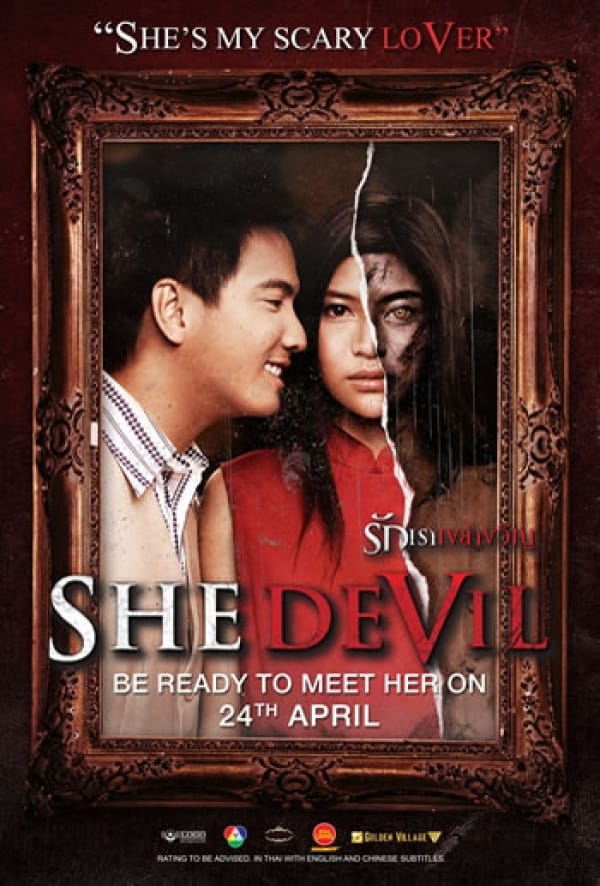 Remember how Momma used to tell you that if you don’t have anything nice to say, don’t say anything? Sadly, we can’t apply those truisms to a movie like She Devil, lest our beloved readers be faced with a blank page in place of a movie review.

With that disclaimer in place, let’s cut to the film synopsis, which quite deceptively sounds like it has some potential for entertainment. Woen (Harin Suthamjatas) is a naive country boy who ends up getting married to Ploy (Payanut Jirarottanakasem), a beautiful, innocent girl by day, and something decidedly more scary at night. Instead of running for the hills, Woen decides to stick with Ploy to see if he can cure her of the demonic possession that she suffers from.

The fundamental problem- okay, who are we kidding. She Devil doesn’t have a fundamental problem; it has problems like George Clooney has ex-girlfriends. Like 2013’s Pee Mak, She Devil tries to straddle the precarious edge between comedy and horror, but unlike Pee Mak– which was good for a few laugh if not for a scare- She Devil is a mess of banal, overdone moments. Add obvious slapsticks to gratuitous jump scares and you’ve got She Devil in a nutshell.

Visually, She Devil has a pretty unique aesthetic. In fact, we’re pretty sure we can identify it as the ‘Monkey With an Iphone’ school of cinematography, and we can only applaud the director for giving gainful employment to fellow simians who have fallen on hard times.

We could go on about the meandering travesty that masquerades as a plot, which the film exacerbates by focusing on completely extraneous ‘buffoon archetype’ supporting characters… or the numerous logical inconsistency… or the cheap visual effects used to depict the titular spook of the movie, but we’re going to cut this one short. Give She Devil a miss unless you’ve a longing for strange, tedious and unusual punishment.