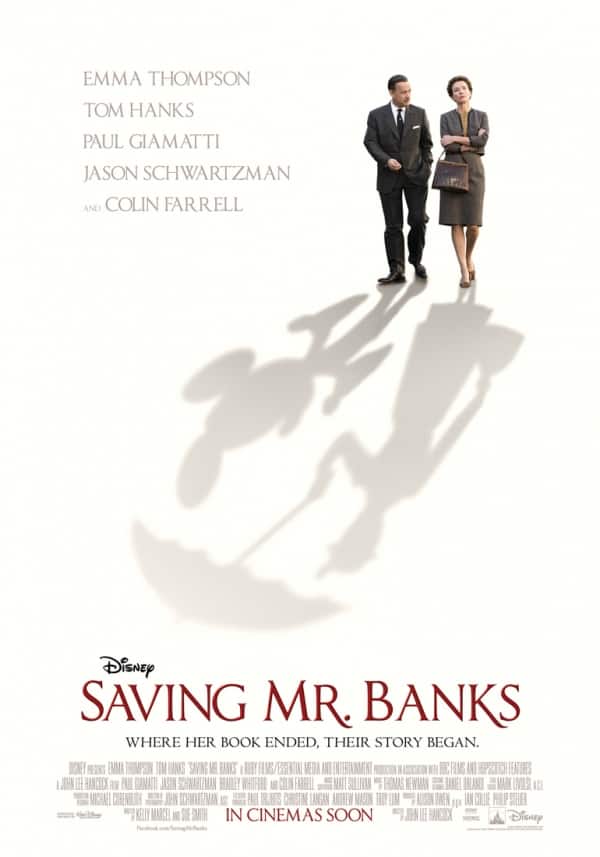 There are very few movies in the world that are so universally beloved and well-known that they can serve as the emotional undercurrent of another film. Mary Poppins is one of that handful: after all, who doesn’t have the fondest memories of the practically perfect Julie Andrews singing songs about spoonfuls of sugar; Dick Van Dyke dancing in his trademark, gloriously elastic way with animated penguins; and stern, career-minded Mr. George Banks loosening up and flying kites with his children?

Nominally, Saving Mr. Banks tells the behind-the-scenes story of how Walt Disney`s silver-screen incarnation of Mary Poppins came to be, swooping as it did into the imaginations of children across the world in the guise of magical songbird Andrews. Actually, John Lee Hancock`s film is a finely-crafted, if rather heavy-handed, character study that doubles as a meditation on family, fatherhood and the healing power of fiction.

For years, Pamela `P.L.` Travers (Thompson) has jealously guarded the rights to her Mary Poppins novels, refusing to bow to the considerable charms and exhortations of media mogul Walt Disney (Hanks) – a man who always get what he wants. When she hits a rocky financial patch in 1961, she`s finally persuaded by her accountant to spend a fortnight in L.A. discussing the project. Once there, she terrorises Disney`s entire creative team – including screenwriter Don DaGradi (Bradley Whitford) and composer brothers Richard (Jason Schwartzman) and Robert Sherman (B.J. Novak) – with her demands.

The story, it would seem, naturally lacks narrative tension – of course Travers gives in at some point, in some fashion. The existence of Mary Poppins in its everlastingly sublime cinematic form – despite Travers` strident and ruthlessly documented (via audio-tape) objections to script, score, animation and character design – is proof of that final surrender.

But Saving Mr. Banks makes up for the inevitability of its outcome with some outstanding character work, allowing the darker and lighter sides of both Travers and Disney to peek through the conflicting personas – one prickly, the other genial – that they present to the world.

In this regard, Saving Mr. Banks benefits enormously from the skill and talent of its two lead actors. As good ol` Uncle Walt, Hanks radiates a genuine charm that comes intriguingly laced with a hint of Machiavellian menace. In his business-minded courtship of Travers, Disney seems to reveal something deeper and sadder about himself and his soul – only for that glimmer of heartfelt intimacy to vanish as quickly as it appears. Hanks is masterful in playing the sweetness and steel of this complicated, media-savvy man, a warts-and-all portrait that`s all the more surprising for the fact that this film was shot under the aegis of Disney`s own studio.

Thompson, meanwhile, is nothing short of spectacular. Onscreen (and, by all accounts, in real life), Travers is abrasive and utterly unsentimental, merrily insulting everyone who crosses her path with little care for their feelings or stature. Thompson breathes life into this difficult character, disappearing into the stern lines of Travers` face and the strict cuts of her dresses (not to mention that unflatteringly tight perm). Most impressive of all is the way in which Thompson plays the chinks in Travers` armour. She skilfully unveils years of guilt and regret in moments of quiet, unexpected vulnerability, all of which hint at the depths of soul and imagination that helped her dream up Mary Poppins in the first place.

It should go without saying that the scenes Hanks and Thompson share are the best in the film. When they meet, Saving Mr. Banks acts as a master-class in physics – irresistible force meets immovable object – and acting; together, they create fireworks both explosive and emotional. There are few scenes more delightful than the ones in which Travers flatly defies Disney`s flights of fancy (no red in the film!), or when Disney takes Travers for a ride (quite literally) in a personal tour of Disneyland.

Unfortunately, a substantial chunk of Saving Mr. Banks – necessitated by the script as its main narrative device – is preoccupied with unravelling Travers` backstory and daddy issues. Far too frequently, the film cuts back to her yellow-washed childhood in Australia, where she – nicknamed `Ginty` and played by the saucer-eyed Buckley – begins to realise that her sensitive dreamer of a dad (Farrell) isn`t quite the hero she has always believed him to be. It`s not that this section of the film is bad, per se. In fact, it features a fine, heartbreaking performance from Farrell as a man who wildly loves his family but can`t resist the siren call of alcohol.

But the themes and ideas of these flashbacks are almost profoundly sentimental and hammered home in so blatant a fashion that one imagines Travers – whether the real or fictitious incarnation – would regard it with a furious disdain. As Travers herself grumbles in the film, when welcomed to L.A. by a roomful of Disney merchandise, the script could afford to “learn the art of subtlety”. For all that Thompson is excellent in the part, it`s sometimes tough to reconcile the open-hearted Ginty with the closed-up Travers. Hancock would have done better to trust Thompson to tell that story in the shifts and shadows of her enormously expressive eyes.

Nevertheless, Saving Mr. Banks powers through on the strength of its marvellous cast. Whitford, Schwartzman and Novak have great fun playing their reactions to Thompson`s Travers, ranging from exasperation to annoyance and, in one case, pure, unfettered anger. The unsung hero of the piece is Ralph (Paul Giamatti), Travers` eternally upbeat chauffeur. For all that Disney tries to find his way to Travers` heart, it`s Ralph who brings the audience there with him.

When it comes down to it, Saving Mr. Banks isn`t about who won in the battle between Disney and Travers. To keep her house and home, Travers pretty much knew from the start that she would have to sign the rights to her beloved magical nanny away. She went to L.A. to fight for the spirit of her story – for her Mr. Banks – and this is precisely what allows the film, buoyed by the undeniable magic of Disney`s final product, to take flight.

Summary: Thompson and Hanks lend magic to a slightly pedestrian script – the result is (mostly) supercalifragilistic… you know where this is going!