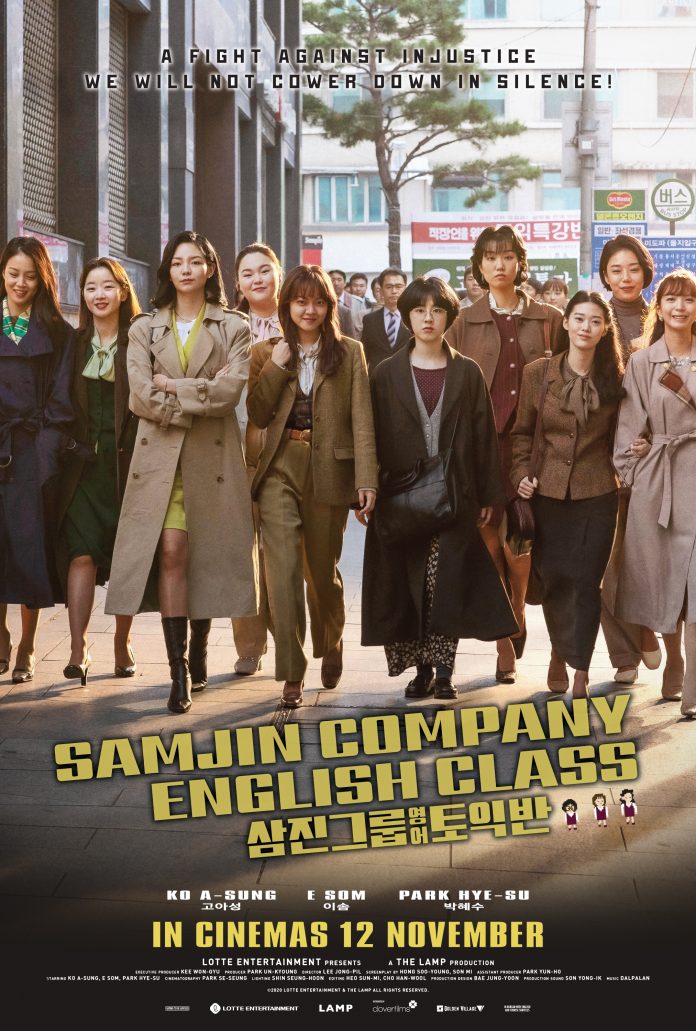 The Low-Down: It’s the 1990s and apart from cheesy hairdos, the Korean Jaebeols (재벌) – big conglomerates – discriminates against females and high school grads, placing yes-men degree holders in higher positions. The 1990s was also when many corporates were obsessed with going global to get foreign investments, overworking employees to the bone. Promotional opportunities only go to those who prove their loyalty, even in the face of questionable work ethics.

The Story: Three “career women” – as lead actress Go Ah-seong (The Host 괴물, Snowpiercer) proudly proclaims – have been slogging for more than eight years, but are still serving coffee to chauvinistic managers at Samjin. Their only chance for promotion is scoring 600 in TOEIC. When the ladies discover dark corporate secrets, they go on full detective mode. Go plays Ja-young, a strong-headed and upright project management assistant; Lee (Inseparable Bros 나의 특별한 형제) portrays Yoo-na, a selfish and shrewd marketing assistant; Park (Swing Kids 스윙키즈) is Bo-ram, a soft-spoken Math Olympiad who gets pushed over one too many times.

The Good: Samjin starts off on a strong foot, establishing the lead actresses as unique yet personable characters. Other supporting characters make an impression too, properly setting the atmosphere of a hierarchical and tense workplace that KMovie and KDrama fans are familiar with. The drama between characters and comedic moments are mostly on point, especially when the movie is not too caught up with exposition of the convoluted plot.

The Not-So-Good: The central plot – three office workers as rookie detectives trying to expose the shady dealings of Samjin’s top executives for the good and safety of the countryside villagers – has one too many layers, making it hard to follow at times. When Samjin tries to add twists and turns to the plot development, the attempts confuse rather than enrich the narrative. It can get frustrating at times when the movie tries to outsmart the audience by revealing the pawns and accomplices in a sloppy and forced manner.

Interesting Individual Sets: That said, each set piece where the trio goes on their mystery-solving adventure deserves praise for its entertainment value. Whenever they’re on screen, it’s a delight to watch them interact with each other naturally, almost like a stand-up. Most of all, their actions are never questionable unlike in some melodramatic movies that indulge their characters in pulpy mystery.

Dark Undertones: Obviously, the dark undertones of corporate corruption and unethical means to maximise profits from shareholders are not discussed much, mainly because it’s a sticky topic to explore. The harsh reality is that some conglomerates start with a good cause, but when in the wrong management’s hands, many will suffer just to fill the pockets of a handful. With the right tenacity and intentions, though, the collective efforts can expose the wrong-doings of greedy corporates – that’s the warm and hopeful message Samjin sends.

Recommended? Yes, because it’s a feel-good movie that shifts away from the current situation while exploring some of the darker moments in Korea’s corporate history. Having three female leads in the spotlight instead of the usual male-centric Korean cinema is also refreshing. The movie also received a positive response from the Korean viewers.