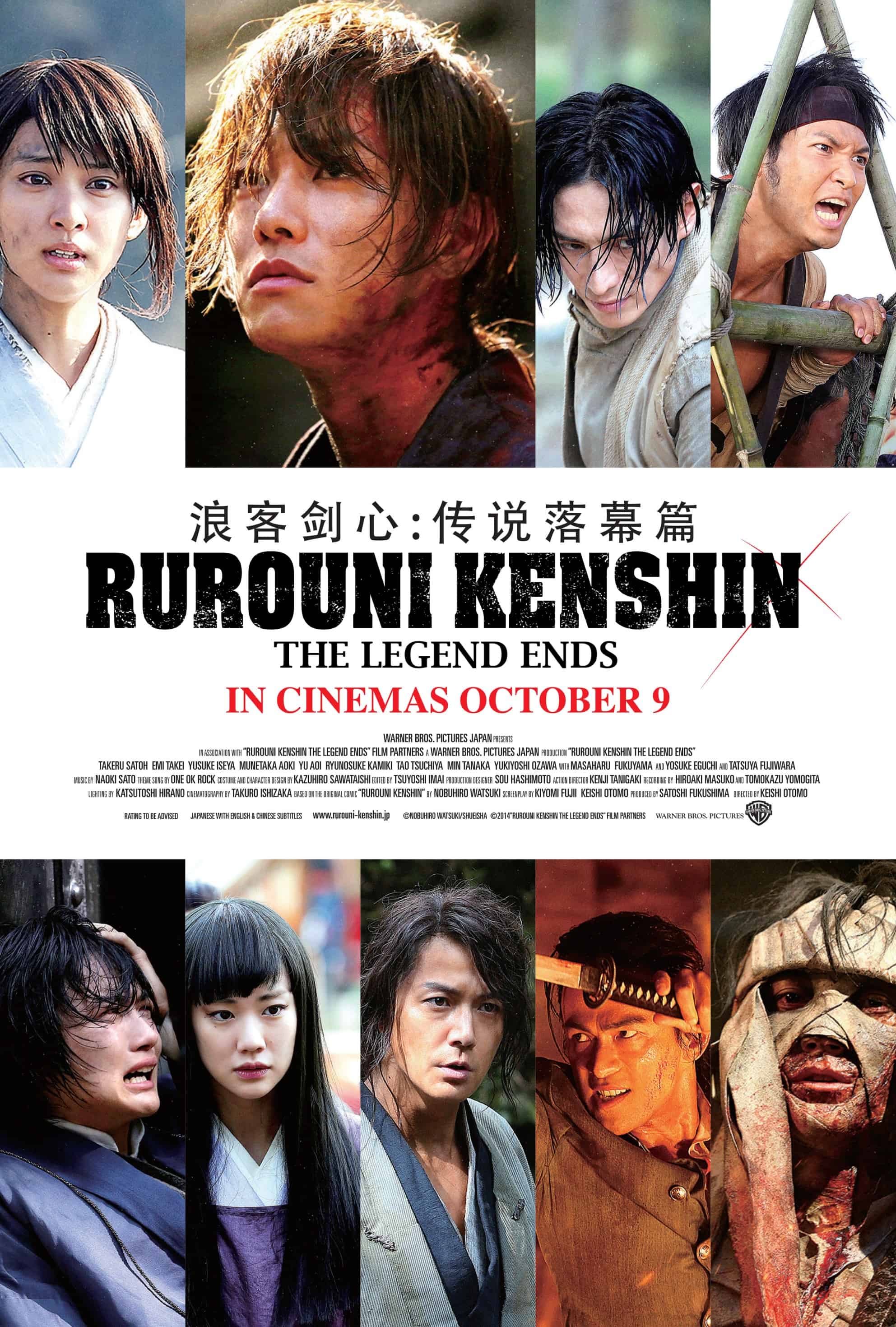 After the superlative high of Kyoto Inferno, it is only par for the course that the Rurouni Kenshin trilogy should end on a lower note, but the good news is that The Legend Ends is just a wee bit less epic and mind-blowing than its predecessor. Apart from some minor pacing and plotting issues, The Legend Ends is able to continue the tradition established by the first two movies, while adding in a few unique ingredients of its own. 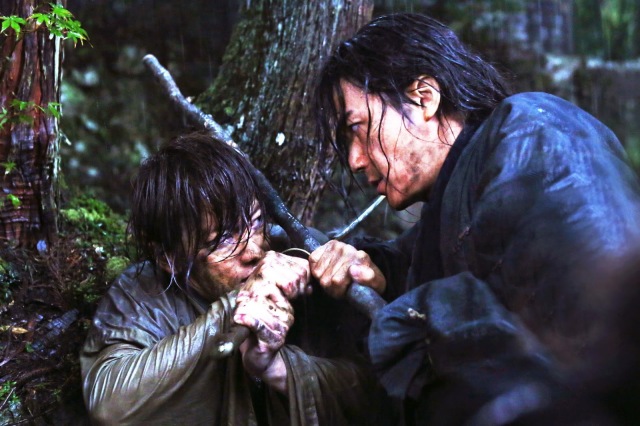 When we last saw former samurai assassin Himura Kenshin (Sato), he had just been washed up half-dead on a shore before being rescued by a mysterious stranger (Fukuyama). Kenshin’s sort-of lady love, dojo owner Kaoru Kamiya (Takei), is also missing in action and presumed lost at sea after being tossed off a ship by the crazed Makoto Shishio (Fujiwara). To stop Shishio’s deranged plan to plunge Japan into feudal chaos again, Kenshin must master the ultimate technique of his sword-fighting discipline, though, with Shishio gathering a veritable army of scorned ex-samurai, he will need all the help he can get. With friends and unlikely comrades in tow, Kenshin must make a final stand upon which the future of the whole of Japan rests, and put an end to Shishio once and for all. 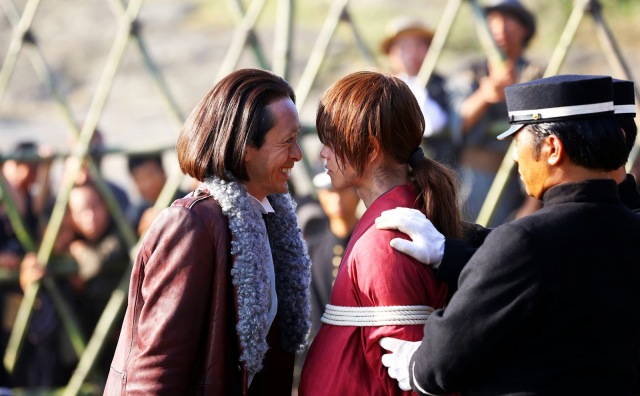 In the vein of the first two movies, The Legend Ends manages to provide plenty of Easter eggs for diehard fans of the original manga (the Ten Swords appear in all their glory!) and Japanese history buffs (there’s a tribute to Perry and the Black Ships!) without alienating those who belong to neither category. The fight sequences are as glorious as ever, and the screenwriters have kept the number of new characters to a bare minimum, which gets rid of the confusion audiences sometimes feel when presented with a manga/anime’s over-populated cast of characters. Anyone who has ever played a Japanese RPG (role-playing game) and enjoyed the experience will feel a chill down his or her spine when the final fight sequence begins. Hint: think Team-up Boss Battle. And The Legend Ends isn’t the kind of movie that hoards all its goodies for the ending, so you can be sure of an intense ride throughout. 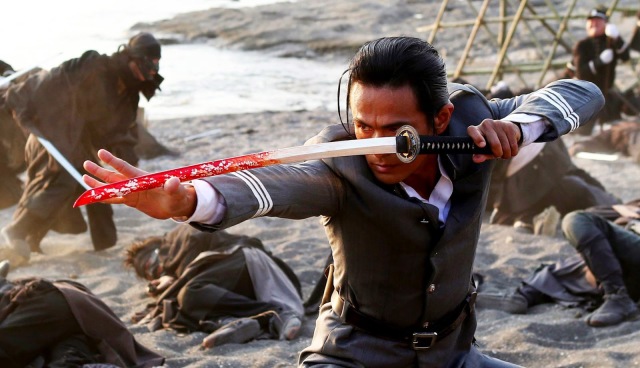 If there’s something to find fault with, it would be that the film starts off a tad too placidly, as there’s quite a bit of exposition in the first thirty minutes. When the first fight sequence begins, though, you stop being bored rather quickly. Some characters are also sidelined for the movie’s first half, like this reviewer’s personal favourite Saito Hajime (played by Yosuke Eguchi), while the extraneous ex-ninja storyline from Kyoto Inferno is back again, though to be fair, the ninja characters do play a significant role in the film’s denouement. Takei’s Kaoru Kamiya is rather marginal this time around, so those who like to see girls kicking ass will have to find their fix elsewhere. The plot isn’t quite as tightly woven either, with some portions feeling like they could have been fleshed out more. The Legend Ends already clocks in at over two hours though, so it’s probably for the best that some things are glossed over. 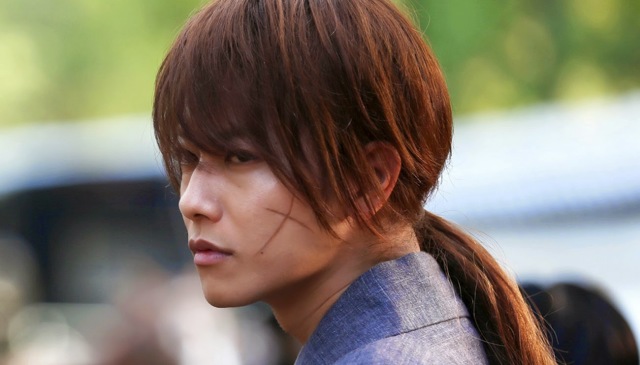 Cast-wise, there’s no further need to praise Sato’s interpretation of the conflicted Himura Kenshin, but special props have to be given to Fujiwara for bringing out Makoto Shishio’s insanity in full without also making him look like a pathetic laughing stock. Fujiwara’s Shishio is alternately gruff, gentle and flat-out creepy, and is truly worthy as a foil to Sato’s own bravura performance. Munetaka Aoki, who plays fighter-for-hire Sannosuke Sagara, also charms with his comic timing, which lightens the mood when the proceedings start to get rather grim towards the end. His messy brawl with one of Shishio’s Ten Swords comes in a close second to the aforementioned final battle sequence. 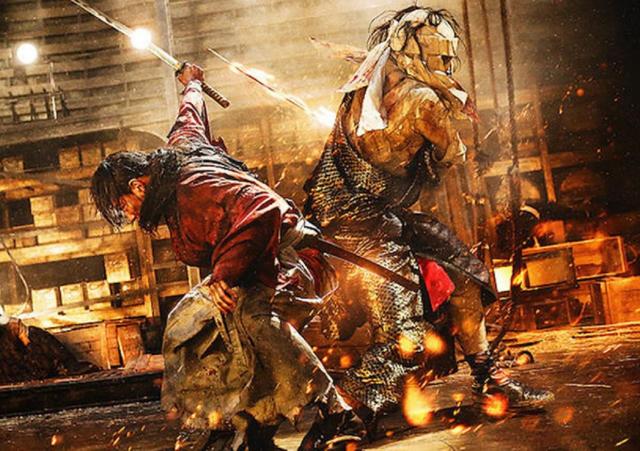 Kyoto Inferno already cemented the status of the Rurouni Kenshin trilogy as one of the most accessible and appealing J-movies to premiere outside of Japan in years, but The Legend Ends brings the curtain down in equally spectacular fashion. Some small issues notwithstanding, moviegoers will be talking about this one for years to come as a benchmark that other films have to live up to.

Summary: A fitting send-off for an epic trilogy. ‘Nuff said.