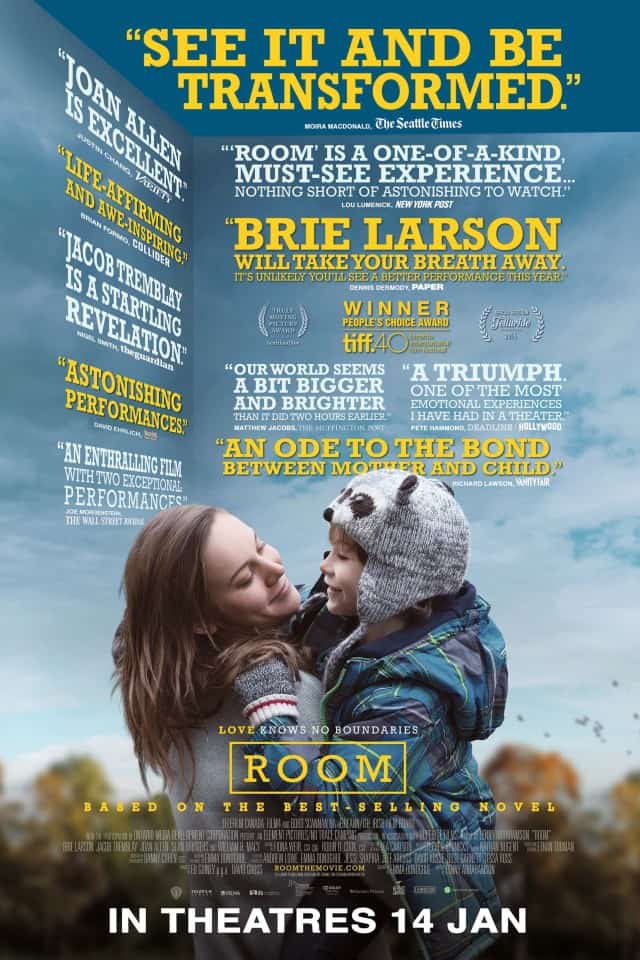 It’s mother and child against the world in this drama based on Emma Donoghue’s novel of the same name. Joy “Ma” Newsome (Larson) has been held captive by “Old Nick” (Bridgers) for seven years, locked away from the outside world. Ma’s young son Jack (Tremblay) has been her companion for five of those years, and the only thing he’s known is the tiny shed known as “Room”. When Ma and Jack finally escape from Room, the world at large, which Jack has hitherto thought of as existing only in some unknowable realm depicted on television, is waiting. Ma’s parents Robert (Macy) and Nancy (Allen) welcome their long-lost daughter back with open arms, but the transition into normalcy is far from a smooth one for Ma and Jack. 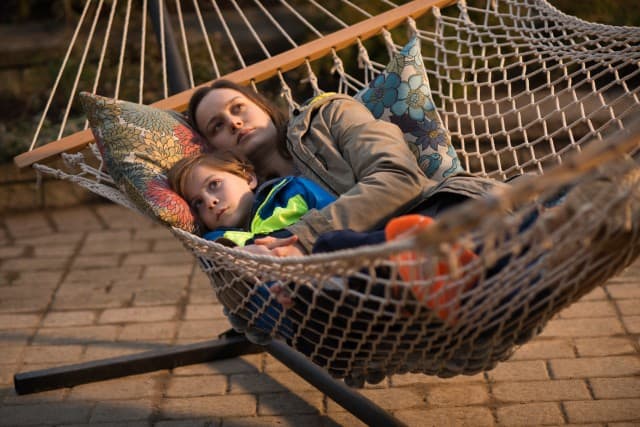 It is unfortunate that this reviewer’s first instinct upon hearing the title of this film was to draw a connection to The Room, that 2003 classic of so-bad-it’s-good cinema. This reviewer knows he’s not alone in that, but it’s something Room certainly doesn’t deserve. Donoghue adapted her own novel into the screenplay for this film, having conceived the story after learning of the 5-year-old child Felix, one of the children held captive in the infamous Fritzl case. As with many smaller films that quickly attract awards season buzz, some audiences might enter the theatre with lofty expectations of a grandiose, artsy work. In director Lenny Abrahamson’s very capable hands, Room is an intimate experience that unfolds at a decidedly unhurried pace. However, it’s remarkably easy to get invested in the tale and caught up in Ma and Jack’s small odyssey made large.

Everywhere one looks, there are film critics raving about the two central performances in Room, and it turns out that Larson and Tremblay are indeed more than worthy of all the praise that has come their way. Every awards season, there are bound to be marquee stars tackling a high-profile, meaty role, usually a biopic of some description, in a bid for Oscar glory. Said performances are typically showy and not always successful. Larson puts in the opposite of that with a quiet, achingly beautiful portrayal of a woman who has braved an unimaginable ordeal, and has a child to care for in the midst of all that. Tremblay’s Jack is utterly believable, immediately putting this reviewer into the character’s shoes. There must be an immense amount for a child in Jack’s situation to process, and believably bringing out that depth is a challenge that Tremblay gamely overcomes. 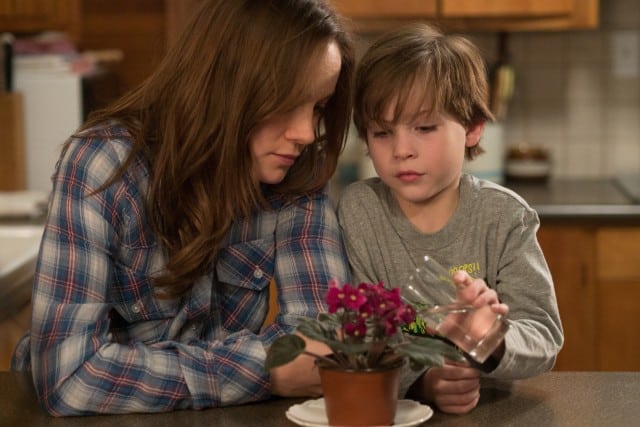 The symbiotic bond between mother and child is strengthened by their experience as captives – Ma is literally Jack’s world, and vice versa. We know they break free of Room, so where’s the mystery or tension? The strength of the relationship is such that the “how” of their escape becomes secondary to the intertwined journeys of the characters. The book was written from Jack’s point of view, with Jack relating his experiences via voiceover in the film. There’s an innocence that is tempered with an unflinching view of how harsh reality can get, a purity that does not disintegrate into amorphous schmaltz. Nothing gets cranked up to eleven, so the emotional beats flow forth naturally and do not come off as an arm-twisting on the part of the filmmakers.

As Jack’s grandparents that he is only just now getting to know, Allen and Macy provide warmth and deep, abiding, mostly unspoken sadness. As their captor, known only as “Old Nick”, Bridgers is deeply unpleasant without being cartoonishly villainous. It’s made clear that because of the many years of emotional torment, Ma’s troubles are far from over once she emerges from Room. While we might breathe a sigh of relief after the escape, a good portion of both Ma and Jack’s soul remains trapped in Room, perhaps forever. 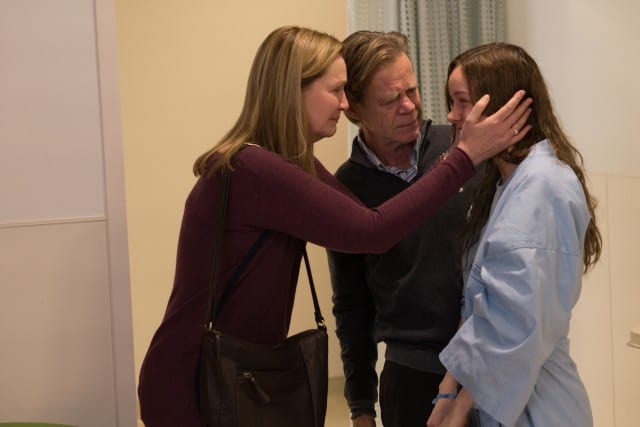 Considering the near-universal acclaim the film has received, it’s certainly not for everybody. For a story that contains elements as dramatic as years-long captivity and a child witnessing the outside world for the first time, this is a very subdued affair that will try the patience of more restless viewers. Keeping the focus on Ma’s bond with Jack means the film doesn’t delve too deeply into the psychological implications of surviving such a trauma. If you’re not wholeheartedly invested in Ma and Jack’s journey from the beginning, it might be difficult to stick around to see what unfolds. However, given the openness and rawness of the performances that Abrahamson draws out of Brie and Tremblay, it’s hard to imagine there will be too many viewers who won’t be.

Summary: A small, low-key movie that packs a powerful emotional punch, the affecting performances of the leads effectively convey an extraordinary bond between mother and child.