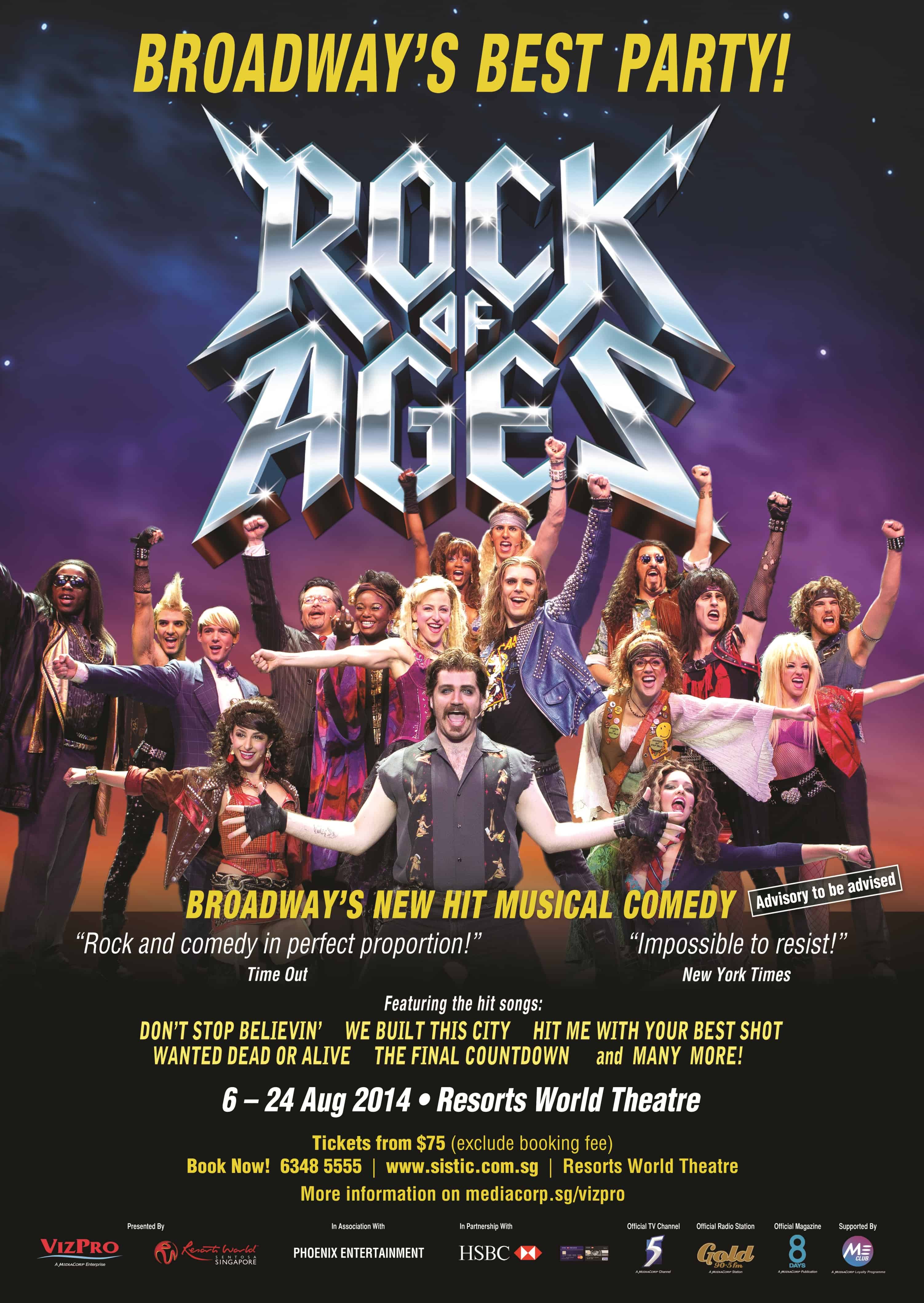 Why would anybody in their right mind want to watch a show that features, as a main character wittily points out partway through, “poop jokes and Whitesnake songs”? For many, many reasons, as it turns out. Rock Of Ages, which has been entertaining audiences on Broadway since 2009 and burst onto the Resorts World Theatre stage yesterday night, is a raucous, ridiculous affair, packed with great songs, great singing, and – surprisingly for a jukebox musical constructed around 1980s rock hits – some really great writing too.

On the surface, the story isn’t much to write home about: wannabe rock star Drew (Scott) and wannabe actress Sherrie (Mullen) meet while working at the once-hoppin’, now-seedy Bourbon Room on LA’s Sunset Strip in the 1980s. They flirt and maybe fall in love, but Drew’s awkwardness and rock star Stacee Jaxx (Hobbs) get in the way. As Drew and Sherrie drift away from their dreams and each other, the Bourbon Room is coming under threat: their boss Dennis (Smith) and his righteous right-hand dude Lonny (Colombo) must fend off the nefarious plan of cash-rich German entrepreneur Hertz (Philip Peterson) to turn the entire Strip into a strip mall. 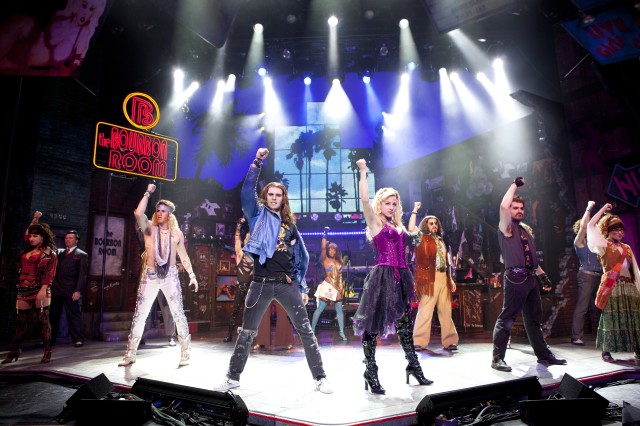 But what makes Rock Of Ages such an unmitigated delight is its sly, witty and very self-aware book by Chris D’Arienzo. The show doesn’t take itself seriously at all, recognising and embracing the clichés at its heart, even as it hands the narrative reins over to Lonny – surely one of the most cheeky, subversive, chaotic narrators you’ve ever seen, in any medium. Frequently smashing through the fourth wall, Lonny capers from one end of the stage to the other, tossing off wry asides at one moment and dancing alongside a string of female strippers at another. You might go in for the songs, but you’ll leave remembering the ways in which Lonny cheerfully and often outrageously jogs the sometimes clunky story along.

Speaking of songs: D’Arienzo has done a mighty fine job, too, of weaving his script around a clutch of classic rock songs from the likes of Journey, REO Speedwagon and Twisted Sister. The show vaults spryly from number to number: Drew falls for Sherrie to the tune of Waiting For A Girl Like You; Hertz’s troubled son Franz (Tanner Hussar) must decide whether to stand by his dad or protest organiser Regina (Jessica Pucek) in Hit Me With Your Best Shot; and the entire cast muses about the vagaries of life and love in Every Rose Has Its Thorn. You’ll recognise the strains of We Built This City as Regina launches her protest movement, and it’ll be close to impossible for anyone to sit still during the two huge numbers that close out each act of the show – Here I Go Again and Don’t Stop Believin’, respectively. 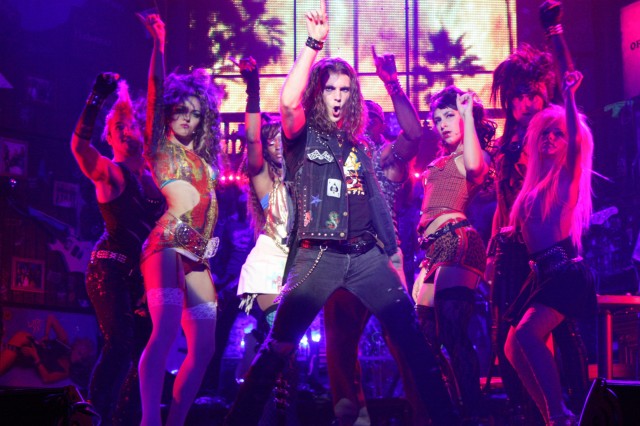 The cast bringing the show to Singapore – the touring cast from the United States – is uniformly excellent. Leading man Scott riffs and shreds his way through his many numbers, performing the most astounding vocal gymnastics even as he credibly hangs on to Drew’s sweet, goofy side. Other standouts include Colombo, a scene-stealer if ever there was one, who struts across the stage with as much charisma and sheer, unadulterated silliness as the part requires; and Kadejah Oné, as strip club owner Justice, who belts in so sultry and spectacular a voice that she might well blow the roof off the theatre.

What lets the production down, unfortunately, is the sound system. As it is, Rock Of Ages can be a tough show to follow if you’re not intimately familiar with its songs. At full volume, the voices of the cast – strong as they are – were woefully overpowered by the pounding music. Ironically, you’ll find yourself having to strain to catch bits of dialogue in what is actually a very loud show. 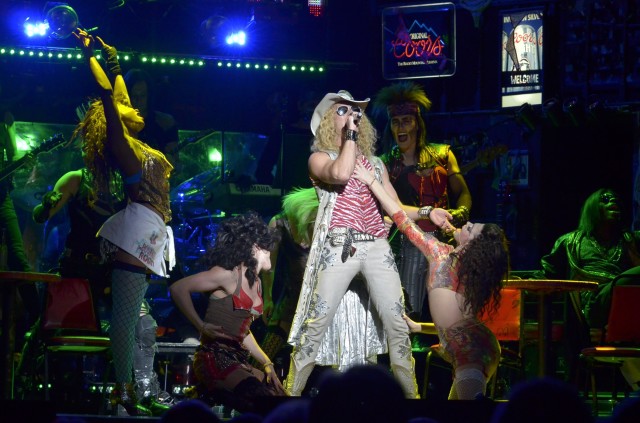 The show also loses a little in its translation onto such a (relatively) big stage. On Broadway, Rock Of Ages plays at the much smaller Helen Hayes Theatre, where audiences are packed in close to the action and are encouraged to bring beer and (fake!) cigarette lighters into the show. In the far larger and more opulent Resorts World Theatre, that intimacy was lost, although the cast worked very hard – perhaps doubly hard – to engage the audience.

None of this is the fault of the show or its cast. Anyone who’s ever seen the show will know – Rock Of Ages is that rare thing, a jukebox musical that thrills and amuses even in its moments of relative silence. Smart, inventive and genuinely exhilarating, this is musical theatre as you’ve most likely never seen it before. Even in a less-than-ideal staging of the show, the frenetic brilliance of its book and score shine through.

Summary: A show bursting with heart, humour and wit – rock on!