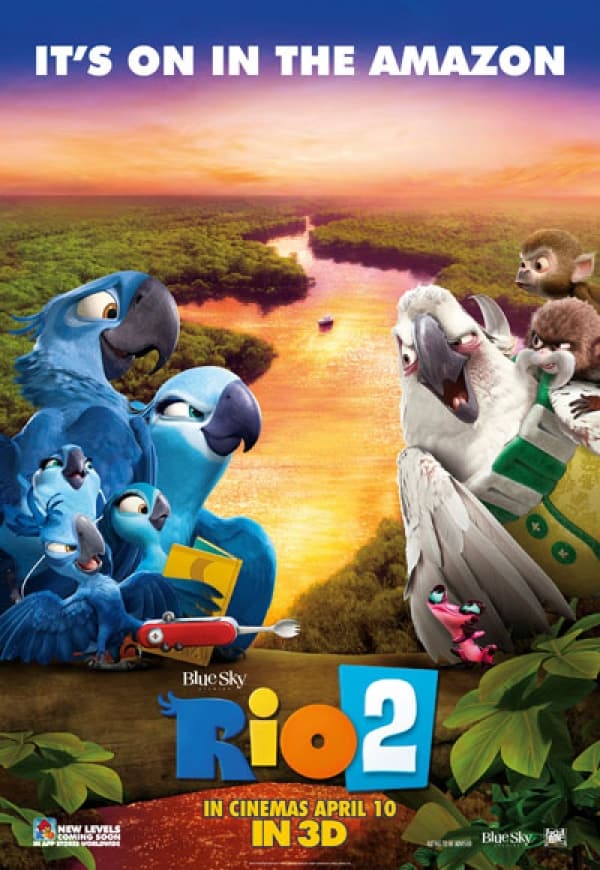 Sequels are tricky propositions – it’s hard to find creative freedom and joy in an enterprise clearly geared towards bringing in ever more heaps of cash. For every glorious Toy Story sequel, there’s Cars 2 or yet another lacklustre installment in the Ice Age franchise. Fortunately for Blue Sky Studios, Rio 2 is frequently excellent, a sunny, cheerful reprise of a hit movie that finds its own grace notes.

Blu (voiced by Jesse Eisenberg), everyone’s favourite domesticated macaw, is happily married to Jewel (Anne Hathaway) after their adventures in the first film. Worried that their three beautiful children are becoming too city-bound, Jewel entreats Blu to take the family to the Amazon to connect with their roots. Once in the jungle, Jewel discovers that she and Blu aren’t the only surviving adult blue macaws in the world after all: she reconnects with her family, including her dad Eduardo (Andy Garcia) and childhood friend Roberto (Bruno Mars). Suddenly, Blu is the odd one out, and must desperately try to fit into a wild, raucous world that seems to have no place for him and his civilised ways.

There’s almost too much happening in Rio 2: apart from Blu’s family troubles, the macaw tribe’s haven in the jungle is under threat from a ruthless logging company. Fan favourite Nigel (Jemaine Clement) – the most puffed-up, actorly, diabolical cockatoo you’ll ever meet – returns to take revenge upon his nemesis, Blu, with poisonous tree frog Gabi (Kristin Chenoweth) in tow. As per the first film, Rio 2 also packs its soundtrack with joyful, high-energy numbers – which is explained away by Nico (Jamie Foxx) and Pedro (will.i.am) auditioning jungle denizens for a spot in the upcoming Rio Carnival.

What’s so impressive about this film is how it manages to make all the disparate elements of its overstuffed plot work. Powered by a loopy, irrepressible charm, Rio 2 dashes from scene to scene, but doesn’t forget to pack in moments that range from affecting (Jewel’s tender lullaby Don’t Go Away) to absurd (Blu’s GPS charting the route to Funky Town). The characters in any given sequel are usually the first to get lost in the shuffle, but they each get moments to shine here. Blu’s connection with his human companion Linda (Leslie Mann) isn’t the focus of this film, but nevertheless makes itself felt in the final act. The relationship between Blu and Jewel is also beautifully heartfelt, dealing with ideas of compromise and growth after the honeymoon is long over.

There’s even room for a new breakout character. The shock of delight provided by Nigel in the first film – so gleefully subversive a villain – is largely eroded here, and he comes off more as a determined buffoon than anything else. But he’s ably matched by the amorous Gabi, whose hopeless adoration of Nigel is channelled into two of the film’s highlights: Poisonous Love, an overblown ballad with several hints of The Phantom Of The Opera; and a wacky, wonderfully rearranged rendition of Gloria Gaynor’s I Will Survive.

Unwieldy though its plot may be, Rio 2 breezes through it all with cheeky energy and eye-wateringly glorious animation. But what makes Rio 2 as good as – if not better than – its predecessor is director Carlos Saldanha’s understanding that losing sight of his characters will only damage the film. And so, amidst the tumult of mid-air football games and swooping aerial dance formations, Saldanha roots everything in the big, loving hearts of Blu and his extended family. The film – and thefranchise – are all the better for it.

Basically: Joyous, silly and affecting, this is a very welcome to Rio.