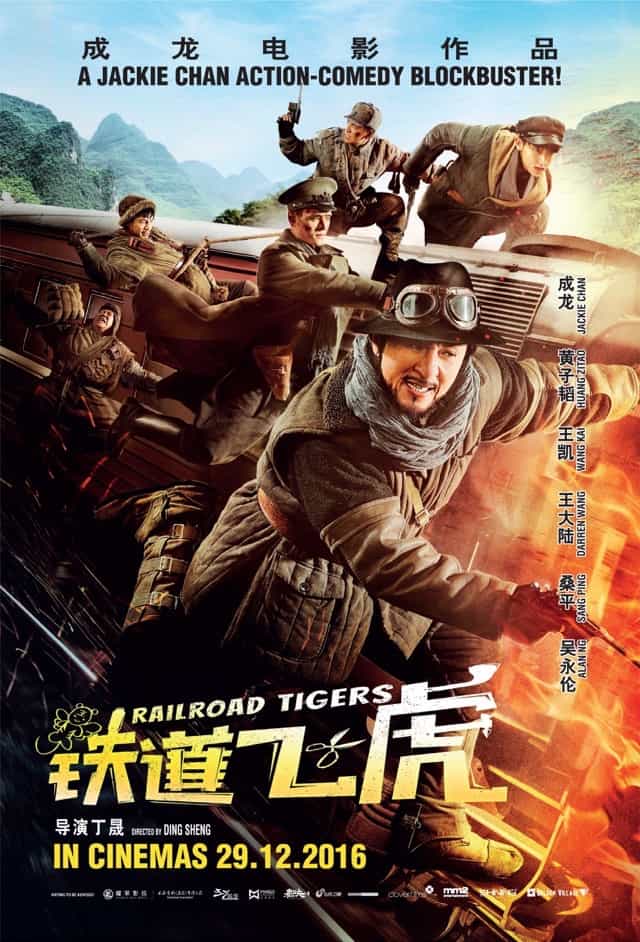 It’s all aboard the Jackie Chan express – destination: Thrillsville. In this period action comedy, Jackie plays Ma Yuan, a porter working at a railway yard in Japanese-occupied China. Ma Yuan leads a motley crew of odd-job labourers who form a resistance against the Japanese, calling themselves the “Railroad Tigers”. The team includes tailor Da Hai (Huang) and Fan Chuan (Wang Kai), the former soldier and current proprietor of a noodle shop. Ma Yuan’s family has been killed by Japanese forces, and he is seeking to make a new life with the pancake vendor affectionately known as “Auntie Qin” (Xu). Ma Yuan, Auntie Qin and company harbour a wounded soldier named Da Guo (Darren Wang), whose compatriots have been killed, stalling a crucial mission to blow up a bridge. Ma Yuan and his fellow Railroad Tigers take it on themselves to complete the mission, with the psychotic commander Yamaguchi (Ikeuchi) and his men standing in their way.

Railroad Tigers is the third collaboration between Jackie and director Ding Sheng, who also directed Little Big Soldier and Police Story 2013. It’s reminiscent of The Good, The Bad and the Weird, which also pitted a ragtag gang against the Japanese military during the Second World War. It fits into that broader sub-category of wartime capers like The Dirty Dozen. For the most part, this is a fun ride. There are several ambitious, explosive action set-pieces, amusing moments of physical comedy and a merry band of misfits to root for. The sequences set in and around moving trains must have been a logistical nightmare to coordinate, so credit to action director He Jun of the Jackie Chan Stunt Team is due. The cast and crew weathered temperatures of -20°C while shooting in Liaoning and Shandong in China, suffering for their art.

The film does have its fair share of issues. It succumbs to a common pitfall of ensemble war movies, that of having too many characters, some of whom are difficult to distinguish from each other or could have been combined for efficiency. Ding also edited the film, and it is choppy and uneven in patches. The use of title cards to introduce each new character is unnecessary, and the 3D-animated interludes, while stylish, tend to take one out of the film. The film’s climax is intense and exhilarating, but it is also protracted and bloated. There is a healthy amount of practical stunt work and miniature effects, but there are still computer-generated shots that stick out. This is all topped off with a completely superfluous celebrity cameo in the film’s closing moments.

Jackie has grown into ‘father to his men’-type roles nicely, and his turn as Ma Yuan is thankfully free of the self-aggrandizing egotism that has plagued some of his recent projects. Jackie is still involved in most of the action and his comic timing remains as sharp as ever. Xu gives the overblown proceedings warmth and authenticity as the ‘auntie’ who sells pancakes by day and helps the rebellion by night.

As is de rigueur in present-day Chinese blockbusters, there must be at least one boyband teen idol to attract the young female demographic; that role falls to Huang Zitao here. Wang Kai steals the show as the dashing, highly skilled Fan Chuan, while Ikeuchi is just the right amount of over-the-top as the blustering villain.

The way the Japanese soldiers are depicted in Railroad Tigers is akin to the portrayal of the Nazis in the Indiana Jones films. While some might find it distasteful that the historical atrocities of the occupying Japanese forces are glossed over in favour of a pulp villain approach, it fits the generally light-hearted tone of the film. There are Japanese characters who are painted as buffoons, but then again, the Railroad Tigers themselves partake in significant quantities of buffoonery.

Railroad Tigers lacks the cohesion and focus to be the supremely entertaining, tightly-constructed romp that it could’ve been, but it delivers the action and the comedy in heaping helpings. There’s a bit in which tank turrets function as swords in a delightfully bizarre ‘duel’. That finale, as drawn out as it is, is an absolute corker.

Summary: A rousing, white-knuckle tale of the scrappy underdogs vs. big bad military forces, there’s a bit too much going on in Railroad Tigers to keep track of but it’s plenty of fun.