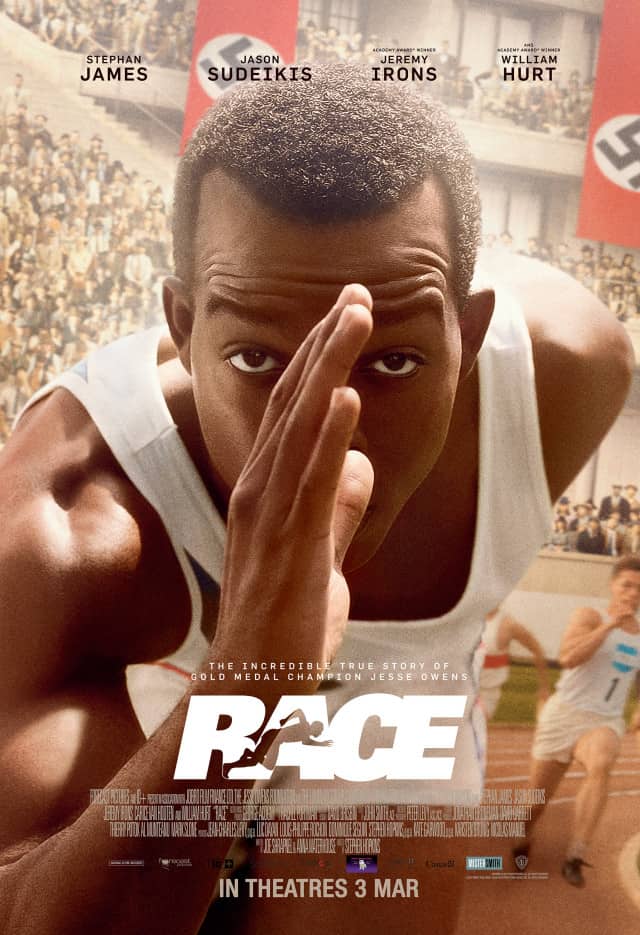 Rousing tales of athletes overcoming all odds in pursuit of ultimate triumph: audiences have seen them a hundred times, but we keep coming back for more. There certainly is competition for the title of “most powerful and inspiring” true story in sporting history, but that of Jesse Owens arguably leads the pack.

James Cleveland “Jesse” Owens is a promising track and field star enrolled in Ohio State University, where coach Lawrence Snyder (Sudeikis), a former Olympic hopeful, takes Owens under his wing. Training religiously in between his studies and working a part-time job, Owens goes on to break three world records at the 1935 Big Ten track meet in Ann Arbor, Michigan and is poised to be part of the U.S. Olympic team. International Amateur Athletic Federation chairman Avery Brundage (Irons) fights a boycott of the 1936 Summer Olympics in Berlin, as Jeremiah Mahoney (Hurt), president of the Amateur Athletic Union, believes that American participation will indicate an endorsement of Nazi ideology. In the face of bigotry at home and the stoking of the fires of World War II in Europe, Owens must chase his dreams and bring home the gold. 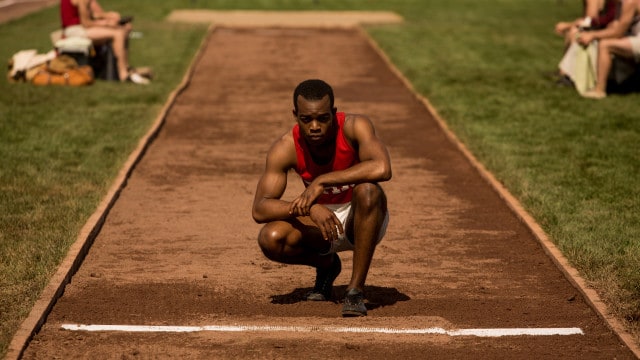 While Owens was the subject of a 1984 made-for-TV movie starring Dorian Harewood, it’s somewhat puzzling that there hasn’t been a theatrically-released biopic made about him until now. All the ingredients for a supremely compelling story are right there, and it seems like a natural awards contender project, so it’s also somewhat puzzling that it’s being released in March, right after the Oscars actually take place. The film’s title, Race, tells you most of what you need to know about its approach. While Owens’ identity as a black man in the 30s definitely figured heavily into his career, the movie seems more concerned with being a political statement than actually shedding light on the person himself. Instead of the racial politics of the era being a backdrop to the biographical drama, it’s the other way around.

For a film about one of the most famous runners of all time, Race is often flat-footed, its handling of the talking-point big issues earnest but clumsy. There’s a predictable formula to Owens’ journey but then again, this is a sports movie and said formula exists for a reason after all. While general audiences might be fuzzy on the minutiae of Owens’ life and times, they should have a rough idea of the basics: he represents the U.S. in the 1936 Summer Olympics in Berlin, clinches four gold medals and leaves Hitler and the Nazi regime with egg on its face, discrediting the notion of non-Aryan inferiority. At 135 minutes, Race is definitely too long. Excessive time is dedicated to the subplot of whether or not the U.S. will boycott the Olympics, and the question of Owens’ participation in the Games is played for suspense, when we all know he did end up on the team. The establishing shots of Berlin are accompanied by almost-comically ominous music and there’s a lot of effort taken to demonstrate that the Nazis were evil. Well, duh. 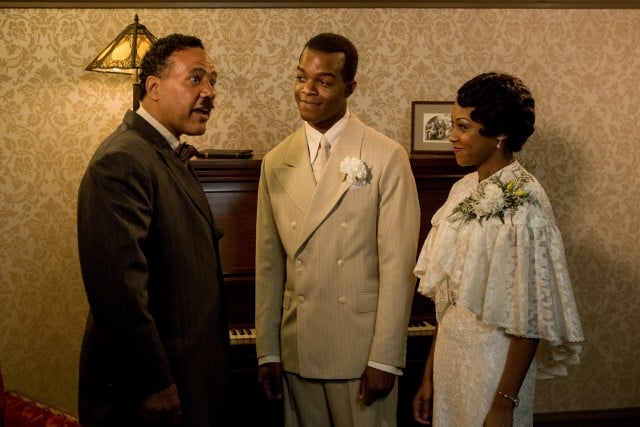 Young Canadian actor James, who replaces the initially-cast John Boyega, ably carries the film with a steadfast portrayal of Owens. Owens is gifted but also disciplined, yet far from superhuman and infallible. There’s a nervous energy and a welcome lack of cockiness, since star athletes are often portrayed as hybrid underdog divas. While the film surrounding him can come off as rote, there is a freshness and honesty that James brings to the table. Unfortunately, as is often the case with films of this type, the romantic subplot with Ruth (Shanice Banton), the mother to Owens’ daughter, feels largely extraneous. 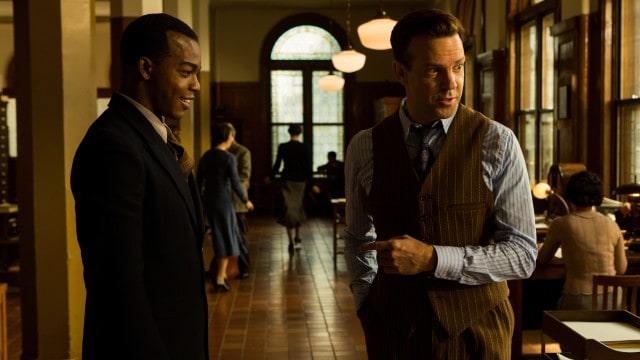 The role of coach Snyder is the first major dramatic part for Saturday Night Live alum Sudeikis, and it’s always a gamble when a comedic actor wants to convince audiences that he’s got range too. As characterised here, Snyder is like any number of coaches in inspirational sports flicks past: his glory days are behind him, he’s haunted by previous failures, he sees the potential in a young person and takes it upon himself to guide said young person towards success, and of course, he’s strict but ultimately well-meaning. It’s a competent performance but one that sometimes calls attention to itself, Sudeikis occasionally giving off “look at me, I’m a serious actor now!” vibes. 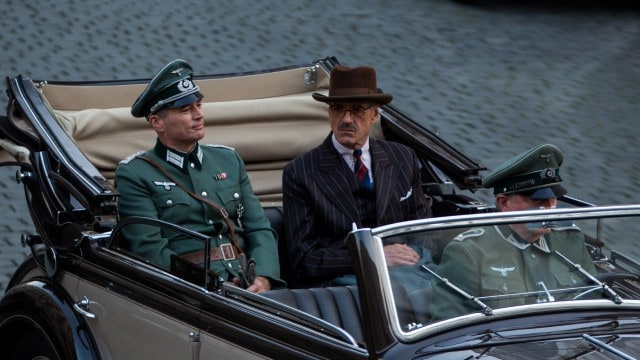 Irons is reliable as usual; the subplot of Brundage’s dealings with the Nazis in the lead-up to the Olympic games might seem off to the side of Owens’ personal journey and is sometimes boring, but Irons himself isn’t. German actor David Kross is supremely sympathetic as German long-jumper Luz Long, who defies the Nazis he represents by befriending Owens. 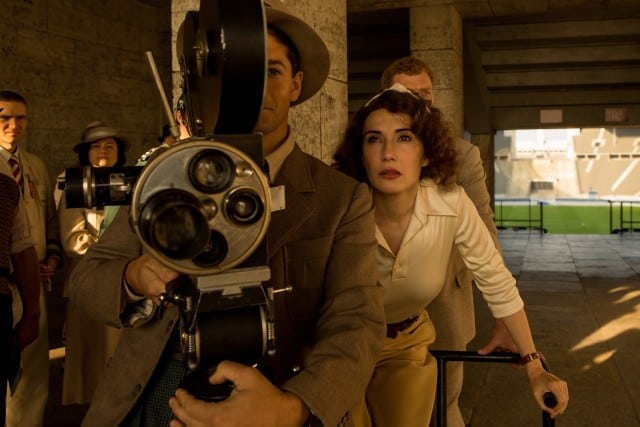 To this reviewer, the most interesting character by a long shot is Leni Riefenstahl (Van Houten), the director tasked with filming the Games for posterity. Nazi propaganda minister Joseph Goebbels (Metschurat) looks down on her, but Riefenstahl is undeterred by him and resolute in her artistic vision. Even though she has a relatively small role in this story, it’s fascinating to see how Riefenstahl presented Owens’ victories to the world against the wishes of her superiors. This is a pioneering filmmaker whose reputation was forever tarnished because of her close association with the Nazis and seeing her depicted in Race made this reviewer want to watch a full biopic centring on Riefenstahl. There have been several attempts at such a project but none have come to fruition.

Race did bring this reviewer to tears, but the heart of this remarkable true story about a real American hero does often get lost in the shuffle of racial politics, historical procedure and established sports drama tropes. Hopkins helmed the far more unconventional biopic The Life and Death of Peter Sellers, but his credits also include Predator 2, Lost in Space and A Nightmare on Elm Street 5: The Dream Child. There’s the sense that he’s going through the motions with Race, and while a Jesse Owens biopic that is less preachy yet more passionate is easier said than done, that’s the treatment the historical figure deserves.

Summary: The Jesse Owens story is too compelling to mess up entirely and Race does attempt to do its subject justice, but Stephan James’ excellent lead performance gets crowded out by heavy-handed preachiness; a certain spark missing in the storytelling.