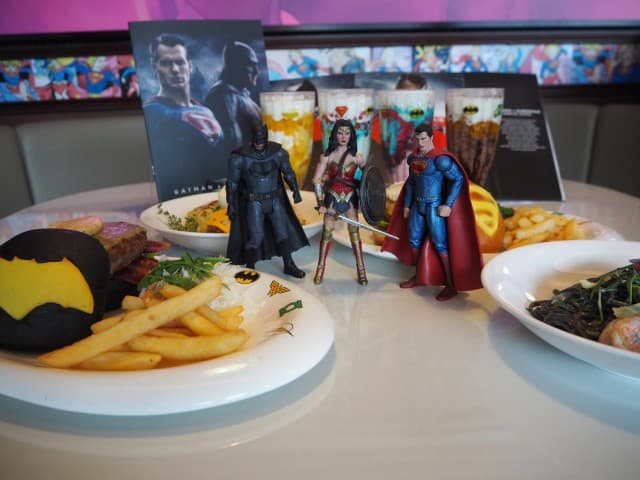 In anticipation of the blockbuster film Batman v Superman: Dawn of Justice, F*** was at the DC Super Heroes Café in the Shoppes at Marina Bay Sands for a media preview event. At the preview, both the exclusive SingPost MyStamp Collection and the café’s new movie-specific menu were unveiled. 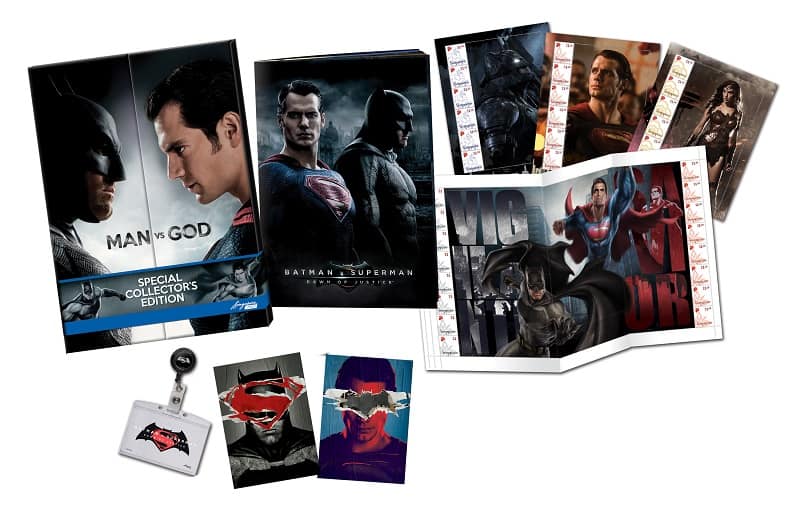 “How can we miss this epic battle?” SingPost’s assistant vice-president of philatelic and stamps, Peggy Teo, asked as she introduced the collection. The Singapore Post has partnered with Warner Bros. Consumer Products in the past to commemorate events such as the 75th anniversary of the Batman character in 2014. This time, SingPost is releasing a limited edition 12-page hard-cover collection that includes three souvenir stamp sheets and a retractable lanyard. In addition to Batman and Superman, the stamps will also showcase Wonder Woman, who is making her big-screen debut in Batman v Superman: Dawn of Justice. 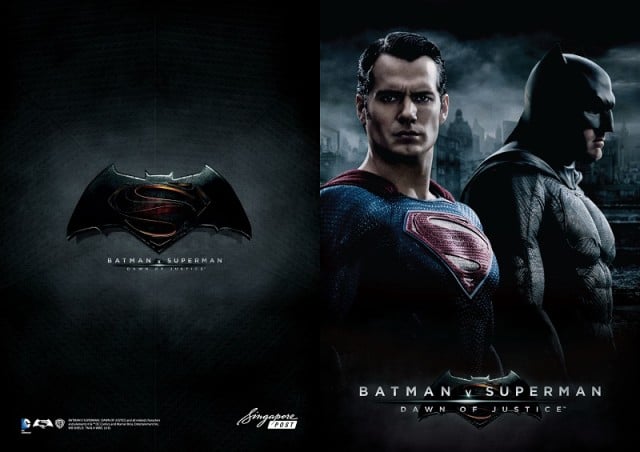 From 24 March 2016, The MyStamp Collection will be available for sale at all post offices, the DC Comics Super Heroes Café, the Singapore Philatelic Museum and online. The set retails at $69.90, but those who pre-order the MyStamp Collection from 11 to 23 March 2016 at www.stampdelight.com will be able to purchase it at $55.90, a 20% discount. 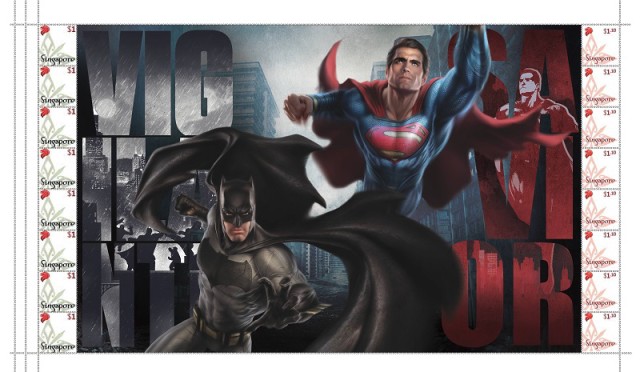 SingPost customers who purchase the MyStamp Collection will stand a chance to see the movie for free. The first 50 SingPost customers who post their purchases online and share the contest details or the product launch link with the hashtag #SPBATSUP via SingPost’s Facebook page will win a pair of movie passes. 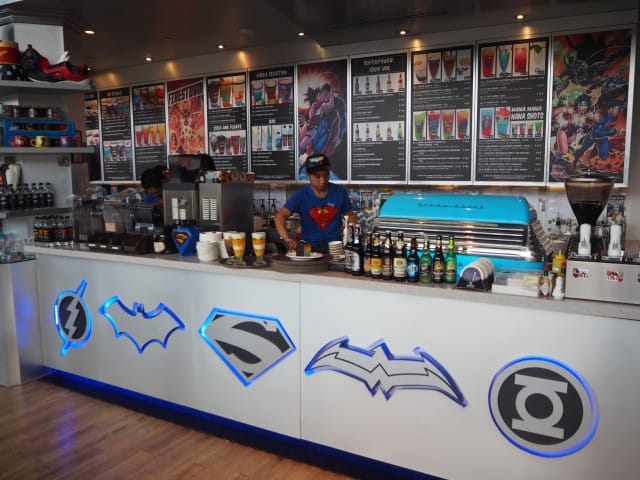 The DC Super Heroes Café is a popular dining destination for families and is decorated with artwork, autographed posters, life-sized statues and collectible figurines. Consulting chef Martin Woo presented the menu items, which are available for a limited period from 17 March until sometime in April. Chef Woo explained his rationale for the dishes – since “Bruce Wayne can afford everything”, more luxurious ingredients such as foie gras butter, Alba truffle sauce, white prawns from the Sea of Japan and Wagyu beef are incorporated into the Batman-themed dishes. Clark Kent was raised on a farm, so the Superman-themed meals are comprised of “humble ingredients” like free-range chicken, organic eggs, tomatoes and avocado to convey a “sense of familiarity and homeliness”. 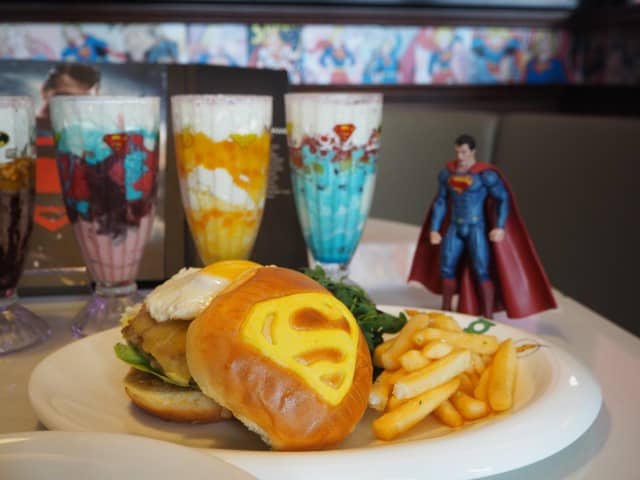 We were served tasting portions of the new menu items to sate our appetite for justice. Superman’s Free Range Chicken Burger ($27.90 ++) is made up of free range chicken patty, a sunny-side-up egg with Dukkah spice, guacamole, melted cheddar, smoked jalapeno and scallion pesto, tomato, lettuce and peanut butter on a buttermilk brioche bun, served with arugula salad and balsamic dressing. The chicken patty tasted very ordinary, and there was a piece of gristle in ours. The Dukkah spice and pesto, ingredients that were meant to be flavourful, barely registered and the bun was rather dry. The peanut butter did add an unexpected flavour profile and was effective in evoking a sense of nostalgia. 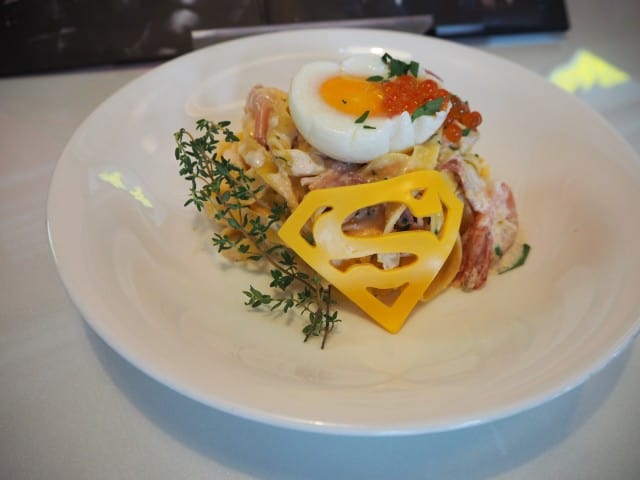 Superman’s Pasta Crevettes Carbonara ($28.90++) fared better. The dish of fettuccine pasta, a poached organic egg, mentaiko (cod roe) cream, red prawns, ikura (flying fish roe) and shaved Parmigiano cheese was rich and flavourful. The sauce was perhaps a little too thick but the dish had a pleasant smoked flavour to it. The mentaiko cream and ikura added a touch of fusion flair, even though they have nothing to do with the corn-fed Clark Kent’s farmboy background. 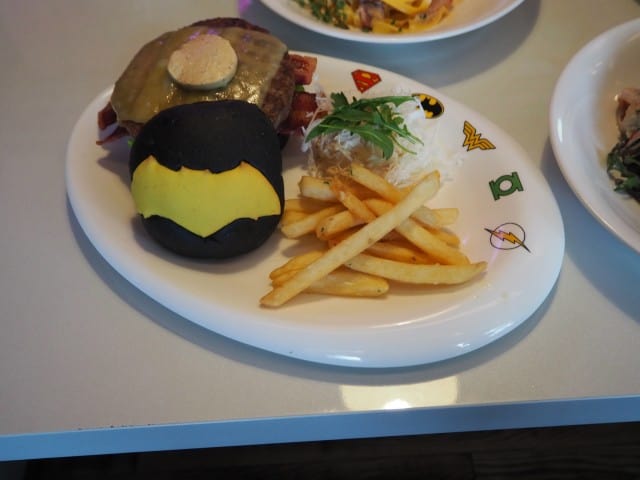 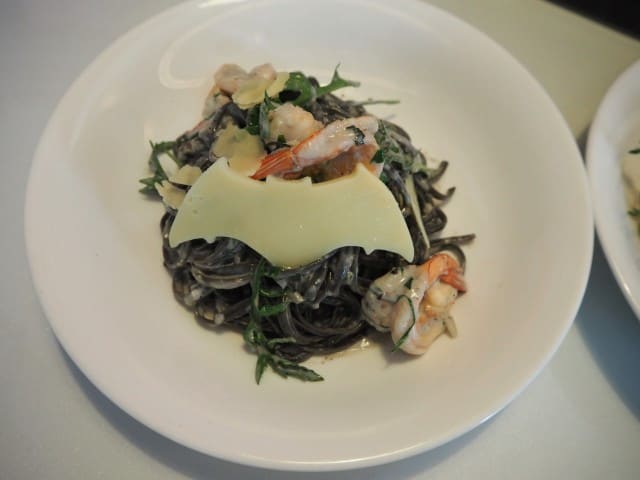 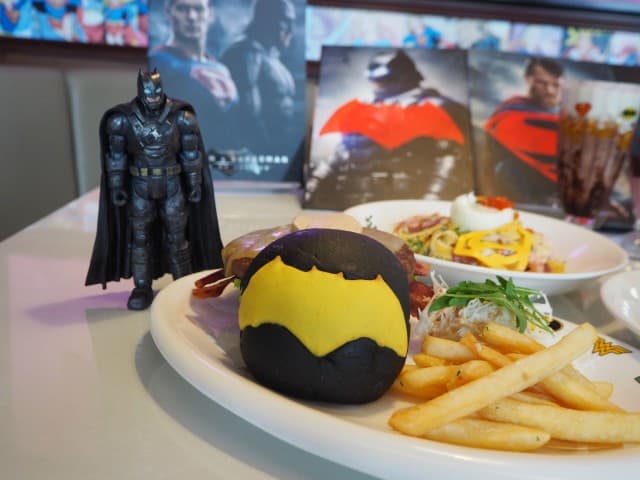 A common criticism of the character of Superman is that he’s boring, and alas, the same is true of the Superman burger. In this culinary face-off, Batman certainly emerges triumphant. Suffice it to say that we wouldn’t be the first to point out that the food at the DC Super Heroes Café is not the main reason most people visit it. 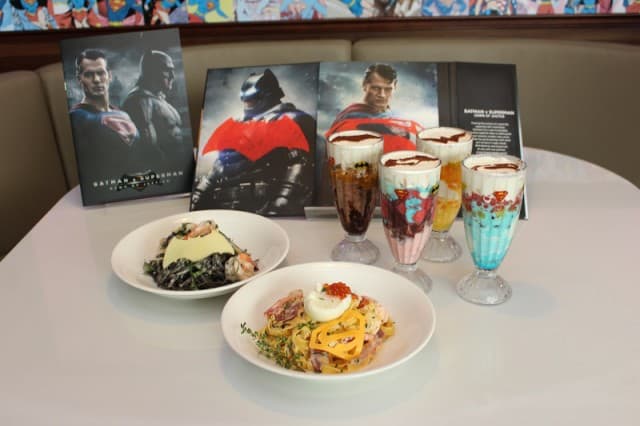 In conjunction with the new menu items, the DC Comics Super Heroes Café also have several movie tie-in promotions going on. The first 500 diners who purchase items from the themed menu will each receive a set of two SingPost movie postcards and MyStamp pieces. The café is also giving out a special movie-themed drink with every purchase of the afore-mentioned Batman v Superman: Dawn of Justice MyStamp Collection.

In addition, 20 diners at the café will win a pair of preview tickets to catch the film at a preview screening on 23 March 2016, a day ahead of its 24 March release date. Terms and conditions apply.

Action figures depicted are the writer’s own.