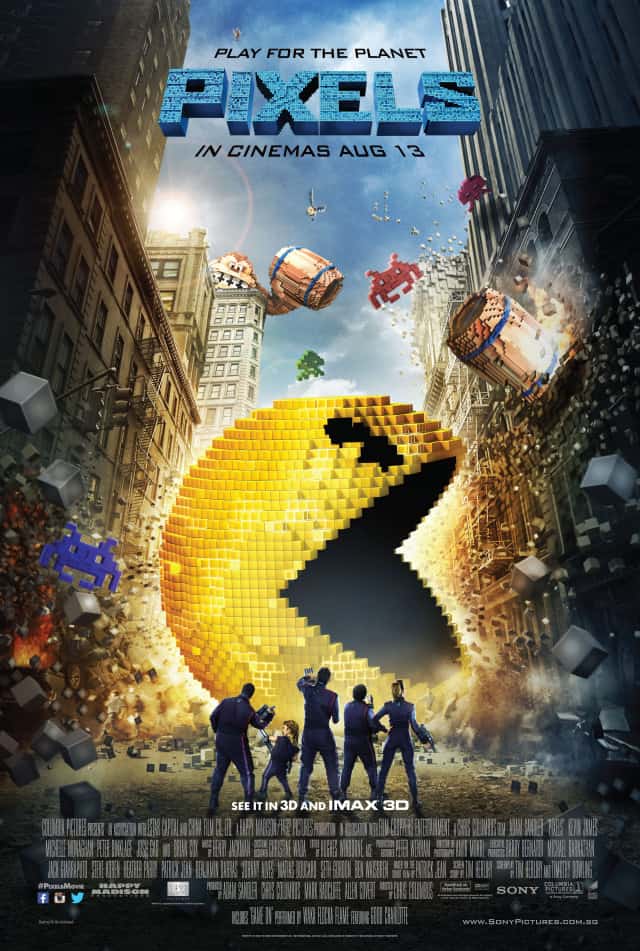 Beloved characters from days of gaming past are no longer confined to arcade cabinets, rampaging through the streets and tearing across the skies in this sci-fi action comedy. When aliens invade earth in the guise of classic arcade characters like Galaga and Pac-Man, President Will Cooper (James) calls upon his childhood best friend Sam Brenner (Sandler) to combat the threat. Brenner was once a Pac-Man champion, but was beaten at Donkey Kong by his rival Eddie Plant (Dinklage), who is provisionally released from prison to help fight the aliens. Rounding out the team is the mal-adjusted conspiracy theorist Ludlow Lamonsoff (Gad), who has an unhealthy obsession with buxom video game character Lady Lisa (Ashley Benson). They answer to Lieutenant Colonel Violet Van Patten (Monaghan), who has helped develop cutting-edge light ray guns to use against the invaders. Brenner and his team, branded “The Arcaders”, are all that stands in the way of the disintegration of the planet.

Pixels is based on Patrick Jean’s 2010 short film that quickly became an internet sensation. It’s not the first good idea that has been completely mishandled by Adam Sandler and his Happy Madison production company, nor will it be the last. It’s an utter disappointment that Sandler got his hands on this – it may seem fashionable to hate on the actor/producer, but it’s completely understandable that many filmgoers are not swayed by his frat boy humour and his penchant for varying shades of prejudice in his movies. His lack of popularity is such that there have even been only semi-joking conspiracy theories that his films are elaborate money laundering schemes. Director Chris Columbus does not have a spotless track record, but having directed the first two Harry Potter and Home Alone movies, is more successful than Sandler oft-collaborators Dennis Dugan and Frank Coraci. This gave this reviewer a glimmer of hope that Pixels would end up better than other Sandler movies. This glimmer was quickly extinguished. 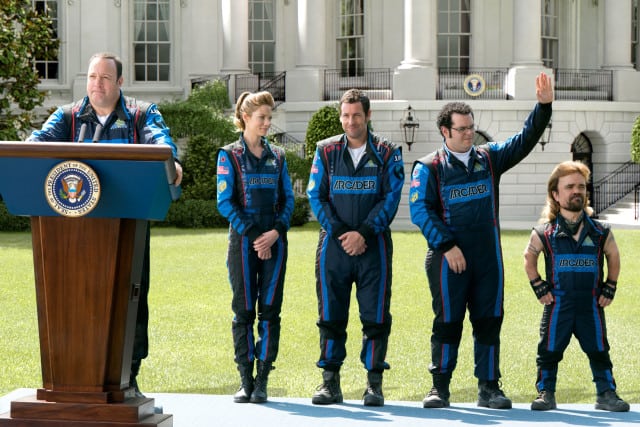 This is especially a shame considering the technical polish with which Pixels is made. The visual effects work, supervised by Matthew Butler and produced by Denise Davis, is excellent and some of the imagery is eye-catching and inventive. A battle against the Centipede from the Atari game of the same name is an absolute blast and the film makes great use of stereoscopic effects, with visual gags like the game scores floating off the screen. The sequence in which our heroes hop into kitted-out Mini Coopers (with the license plates “Pinky”, “Inky”, “Blinky” and “Clyde”) to fight Pac-Man in a high-speed skirmish on the streets of New York is plenty of fun as well, even if it owes a huge debt to Ghostbusters.

This might have worked with a different plot and different characters, because the characters are generally very unlikeable. Sandler stars as a ne’er-do-well home theatre system installer, his ego overwhelmingly apparent as he’s cast himself as the underdog who is “the only man for the job” and is eventually adored by the public as an international hero. Kevin James is the least believable movie president since Charlie Sheen in Machete Kills. Granted, it’s supposed to be a joke, but the casting of a credible actor as the President would have given the film at least some grounding, because if it’s all a joke, then the stakes are diminished.

Josh Gad plays the stereotypical basement-dwelling, mouth-breathing nerd, who actually seems to have some very serious issues that we’re supposed to laugh at instead of be concerned about. It’s a shame that the character is as loathsome and unimaginative a caricature as he is, since Gad has displayed a fair amount of charm in other roles. Peter Dinklage is similarly wasted as the show-boating Eddie Plant, who was apparently modelled after real-life Pac-Man and Donkey Kong champion Billy Mitchell. Dinklage is clearly having a lot of fun in the role, but his character is so repulsive that’s it’s difficult to enjoy his performance. Part of Eddie’s terms in order to help the government fight the aliens is that he gets to have a threesome with two unlikely female celebrities, a joke which is followed up on instead of being treated as an absurd and offensive request.

This brings us to the lead female character, Michelle Monaghan’s Lt. Col. Van Patten. We’re left picking at scraps, and at the very least, this reviewer is grateful that there’s a woman in a position of power in the film and Monaghan carries herself with as much dignity as she can. Of course, there’s an inane romantic subplot involving Van Patten and Brenner, complete with the “they start out hating each other!” romantic comedy arc. Ludlow’s slobbering obsession with the Red Sonja-esque Lady Lisa is nauseating, and one of the takeaways of the film is that women are trophies who can be won and owned. On top of that, there are multiple casual sexist remarks, such that the film’s atrocious attitude towards women is impossible to ignore. Not content with being flagrantly misogynistic, Pixels also tosses in a stereotypical portrayal of Pac-Man creator Toru Iwatani (Denis Akiyama) and a nigh-incomprehensible, buffoonish British Prime Minister (Penelope Wilton). A scene set in India takes place in front of the Taj Mahal, because how else are audiences supposed to recognise that it’s India otherwise? 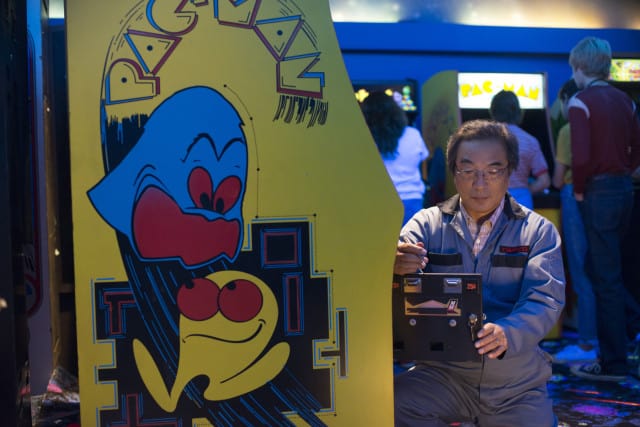 Pixels is Adam Sandler’s attempt to hop on the geek bandwagon in a bid to cash in on the retro nostalgia trend. The film bombed upon its opening in the U.S., another blow for Sony just as the studio has been reeling from a massive cyber-attack. This could have been excellent in the hands of someone with a genuine love for classic arcade games, a passion that was palpable in Wreck-It Ralph, which was fuelled with lots of heart and had jokes that were actually funny instead of offensive and cringe-worthy. Animated sci-fi comedy series Futurama also did the “aliens attack earth in the guise of video game characters” plot way back in 2002 – and, needless to say, far better. It’s truly a shame that all Pixels amounts to is Adam Sandler hurling barrels at the audience for two hours.

Summary: Pixels has Adam Sandler’s grubby fingerprints all over it, smearing a fun premise and some engaging visuals with crass, tasteless jokes and unlikeable characters.