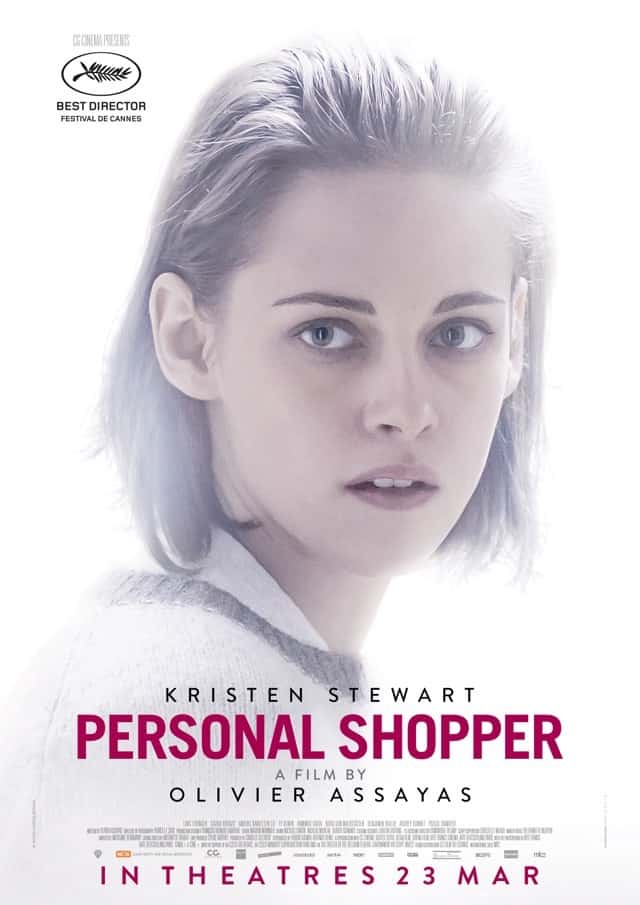 Kristen Stewart is no stranger to the paranormal, having been entangled with vampires and werewolves. In this psychological drama, she encounters – to borrow a joke from the Ghostbusters reboot – ghosts from her past: both literally and figuratively.

Stewart plays Maureen Cartwright, a 27-year-old American working as a personal shopper in Paris. She can’t stand her boss, the haughty, well-heeled socialite Kyra (von Waldstätten), and misses her boyfriend Gary (Olwin), who is working as an I.T. technician in Oman. In addition to discerning taste, Maureen has another gift: the ability to communicate with the dead. When she notices eerie goings-on, Maureen suspects that her recently-deceased twin brother Lewis might be reaching back from the great beyond. She begins receiving ominous text messages from an unknown sender, and finds her life upended by unexplainable other-worldly occurrences.

Writer-director Olivier Assayas has described Personal Shopper as a companion piece to his previous film, Clouds of Sils Maria, in which Stewart also played the assistant to a wealthy woman. Personal Shopper is difficult to classify, and while it is somewhat infamous for eliciting boos at a press screening during the Cannes Film Festival, many critics later rushed to its defence. Assayas also bagged the Best Director Award, tying with Graduation helmer Cristian Mungiu. It’s the kind of film that will leave some audiences entranced, others puzzled, and drive yet others positively mad. This reviewer’s reading of the film as a deliberately inscrutable arthouse take on the ghost story genre might be a shallow one, but we just couldn’t get into Personal Shopper.

Assayas approaches the supernatural premise with the straightest of straight faces, the film never even hinting that it acknowledges its inherent absurdity. Personal Shopper demands the audience’s suspension of disbelief, yet seems unconcerned with earning it. It’s unlike any ghost story you’ve seen, but that’s not necessarily a good thing. There are several creepy scenes and a couple of effective set pieces, but in flitting from supernatural horror to quiet character study, Personal Shopper comes off as half-baked. There are frightening moments, but because the central mystery goes nowhere and multiple loose ends are left untied, the film doesn’t burrow under one’s skin the way it was likely intended to. One crucial scene seems reminiscent of a sequence in the afore-mentioned Ghostbusters reboot, but since both films were in production at the same time, it’s most likely mere coincidence.

This reviewer views Kristen Stewart as the female Jesse Eisenberg – their similarity is probably why they’ve worked so well together in Adventureland, American Ultra and Café Society. Both are known for nervous tics, an awkward public persona and can sometimes come off as aloof. They’ve both floundered about in big-budget blockbusters but excelled in smaller, character-driven projects. While Stewart has been praised for her role in Personal Shopper, we found her performance less than compelling. She displays a lot of the neurotic twitchiness and restlessness we’ve come to expect of her, and Maureen’s conflicting disdain for and desire to emulate Kyra is underplayed. For a film set in the world of Parisian high fashion, there’s very little vanity in Stewart’s performance, but there’s also little to capture the attention – that is, if one can’t muster up any excitement over seeing Stewart topless.

One of the arthouse touches that Assayas attempts to spice up this cold, soporific ghost story with is Maureen being fascinated with artists said to have been in contact with the spirit world. Maureen looks up Swedish artist Hilma af Klint, who claimed that spirits painted through her and whose work predates the known invention of abstract art. Maureen also watches a TV movie about Victor Hugo’s séances, with French singer Benjamin Biolay portraying Hugo in this show-within-a-show. It isn’t chintzy enough to look like a 60s TV movie, and these ideas are merely presented in the film, rather than worked into its fabric.

Personal Shopper might be regarded as a cult oddity of European cinema, reaching a wider audience than your average arthouse curiosity thanks to its American star. While there are glimmers of promise in auteur Assayas’ unorthodox take on the supernatural, it’s too detached and preoccupied with being abstruse to truly be haunting.

Summary: A high-falutin’ blend of supernatural thriller and character drama, Personal Shopper is an odd beast which alienates more than it frightens.