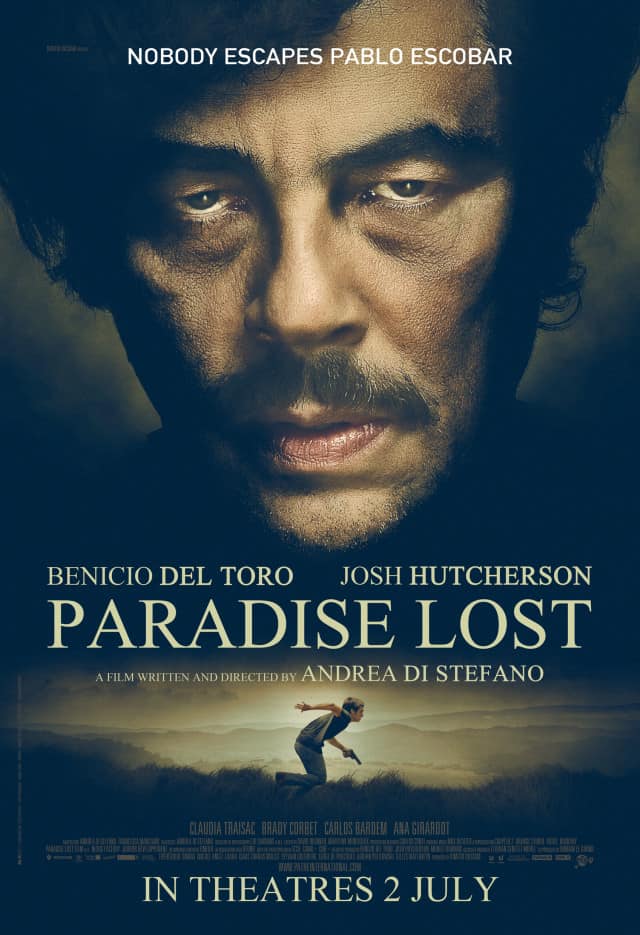 Benicio Del Toro sure has moved up in the drug underworld, going from playing Bond villain henchman Dario in License To Kill to portraying notorious real-life kingpin Pablo Escobar here. It is 1983 and Canadian surfer Nick Brady (Hutcherson) accompanies his brother Dylan (Corbet) to Colombia, where the duo run a surfing camp. Nick meets and falls in love with Maria (Traisac), who happens to be the niece of local politician and drug lord Pablo Escobar. Escobar appears to take a shine to Nick and is keen to welcome him into his large family, Nick spending increasing amounts of time at Escobar’s luxurious Hacienda Nápoles estate. However, when Nick realises that he’s in over his head and the bodies start piling up, it might be too late for him. 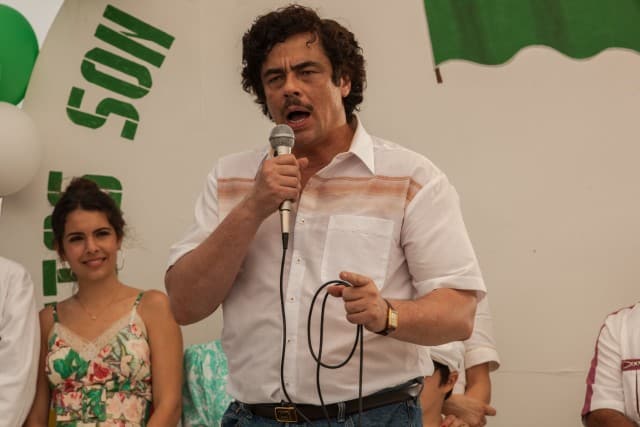 Paradise Lost (also released as Escobar: Paradise Lost) is the writing and directing debut of Italian actor Andrea Di Stefano. Instead of making a straight-up biopic, Di Stefano has chosen to tell a story about the ‘King of Cocaine’ from a different angle. Our way in is the fictional Canadian surfer Nick, played by Hutcherson. Many films have an “audience identification character” whom viewers, unfamiliar with the world being portrayed, can relate to. In Paradise Lost, the fictional audience identification character is the primary focus, with the fascinating real-life figure relegated to a supporting role. This ends up being very frustrating, resulting in the nagging feeling that there’s a more compelling story taking place right around the corner from our protagonist, but we’re stuck with him. 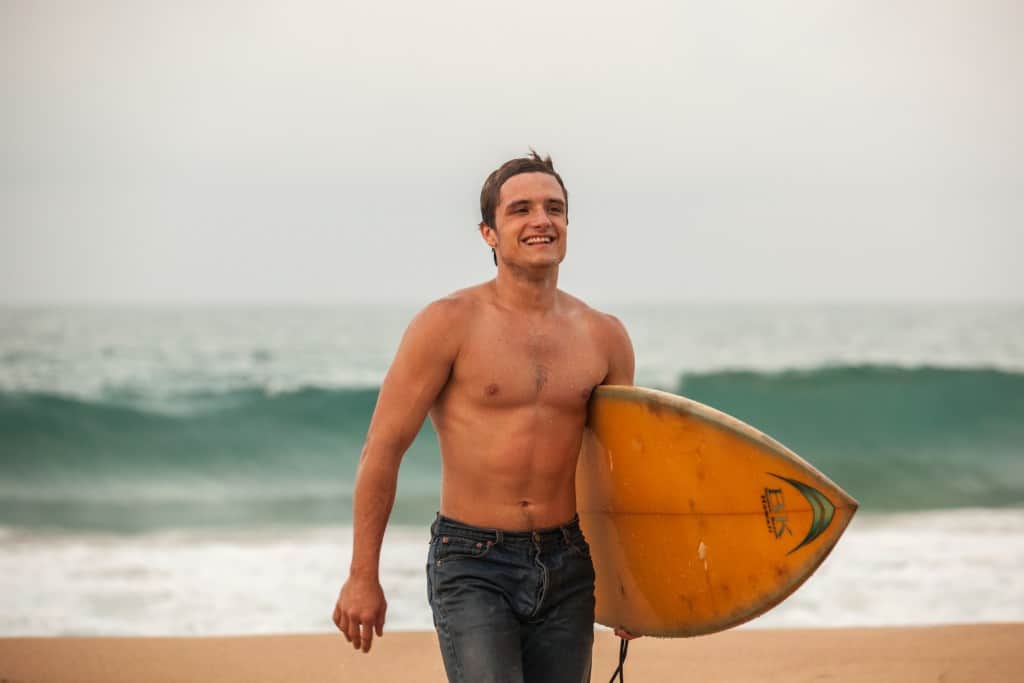 This is not necessarily Hutcherson’s fault – he’s competent in the role and the character’s blandness is more a result of the writing than his performance. The romance between Nick and Maria, arguably the story’s linchpin, gets surprisingly little meaningful development. Their relationship progresses at an almost comically fast pace – they meet and are engaged in what is practically the next scene. There are also many times when Nick’s behaviour goes past ‘naïve’ into ‘just plain stupid’. This is clearly a very dangerous, very powerful man you’re tangling with, what did you think was going to happen? 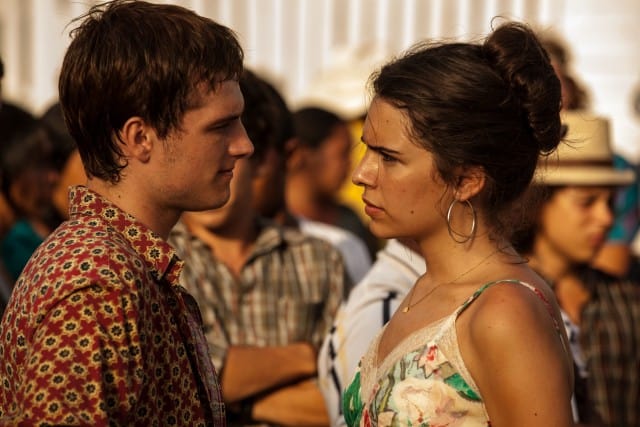 Del Toro is the ideal candidate to play the larger-than-life drug lord. He has enough gravitas, ‘serious actor’ cred and that vital crazy streak required to pull off the part. The nature of the film is that, even though Del Toro has a good amount of screen time, Escobar is a background figure in his own story, which is something of a shame. He manages to find that balance between charming and menacing and, while it isn’t exactly a subtle performance, he never flies into over-the-top histrionics as a lesser actor well could have. There’s also the physical transformation, with Del Toro packing on the pounds to play the slovenly drug lord. 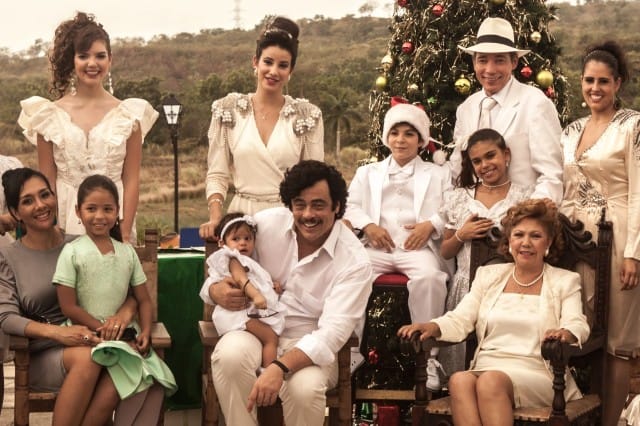 Paradise Lost is handsomely shot by cinematographer Luis David Sansans and was filmed on location in Panama. Production designer Carlos Conti does a laudable job of re-creating Escobar’s sprawling ranch, the grounds decorated with life-sized statues of dinosaurs because he’s just that wealthy. Unfortunately, this atmosphere of authenticity is often marred by how obviously tacked-on Nick’s story feels, to the point where it becomes an obstacle rather than a way in for the audience. Di Stefano does construct several moments that result in a genuine ‘pit of your stomach’ feeling and there is a sense of mounting dread, but it’s ultimately a pity that, with a subject as rich and fascinating as the notorious Pablo Escobar, Paradise Lost only scratches the surface. 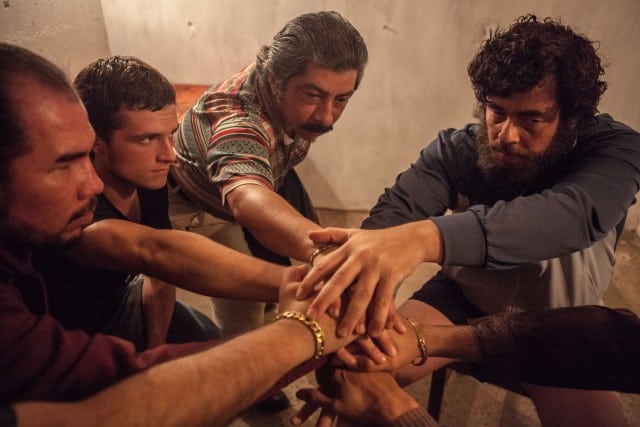 Summary: While it boasts a memorable turn from Benicio Del Toro, Paradise Lost’s gamble of making the main character a fictional one doesn’t pay off.