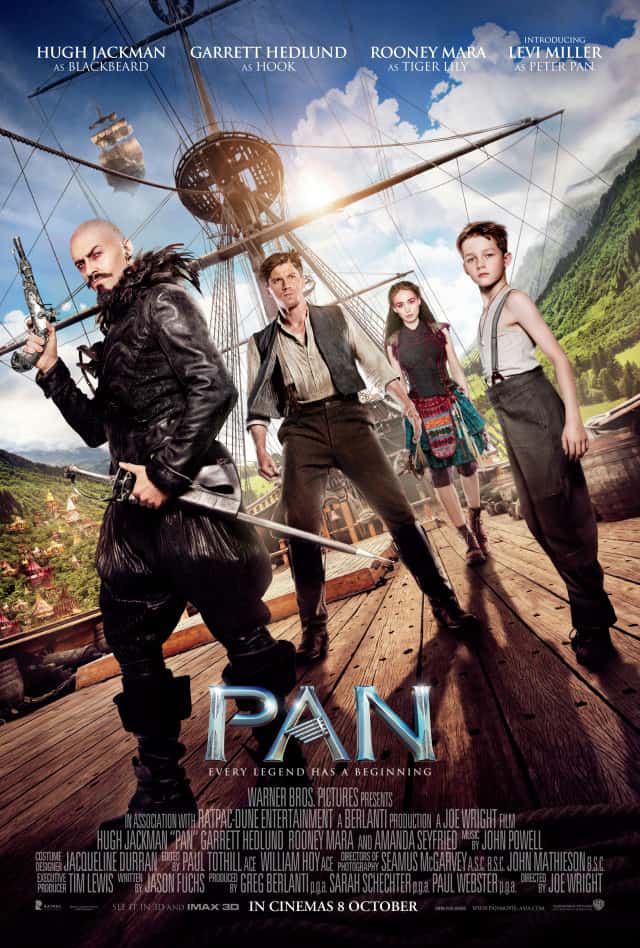 The boy who would never grow old is also apparently the well that would never run dry, as here we are with yet another return to Neverland, this time to see how Peter Pan began. Peter (Miller) is an orphan in World War II-era England who, alongside his best friend Nibs (Lewis McDougall) bedevils the strict nuns who run the orphanage, holding out hope that his mother will one day return for him. One night, Peter gets spirited away via flying pirate ship to the magical realm of Neverland, where he is forced to work in the mines run by the flamboyant, tyrannical Blackbeard (Jackman). Peter befriends fellow miner James Hook (Hedlund) and, along with Smee (Akhtar), they escape the mines. They run into Tiger Lily (Mara), princess of the Piccaninny Tribe, who helps Peter discover his destiny and unveils the mysterious truth about Peter’s mother. With Blackbeard closing in, Peter must overcome his doubts and embrace his place as Neverland’s saviour. 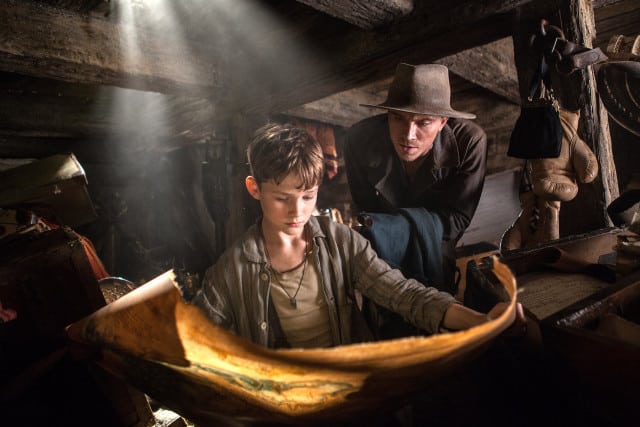 Since Peter Pan’s creation by author J.M. Barrie in 1902, the character and the mythos has been adapted and re-interpreted innumerable times for the stage and screen. Pan hops aboard the “revisionist fairy-tale” bandwagon, recounting Peter’s secret origins. “This isn’t the story you’ve heard before,” the opening voice-over by Peter’s mother Mary (Seyfried) proudly proclaims. The thing is, the embellishments add very little to the story as we know it, with allusions to events that will unfold later on coming off less as knowing winks and more as on-the-nose insertions. Peter Pan’s early days as an orphan give the story a Dickensian spin and the visual of a flying pirate ship taking on RAF and Luftwaffe fighter planes during the Blitz is fun but, ultimately, relatively pointless. That’s a good way to sum up Pan – “fun but, ultimately, relatively pointless”.

Director Joe Wright set out to craft a family-friendly live-action fantasy adventure, and it turns out there aren’t that many of those in theatres these days. It is a positive sign that Pan avoids being dark and grim and embraces the joy that has become associated with Peter Pan. Visually, it is pretty to look at, production designer Aline Bonetto crafting some dazzling mini-worlds. However, it isn’t anything radically inventive, the look of Neverland’s various environs owing a lot to previous versions of the story and other fantasy films. Complaining about computer-generated imagery has become tiresome in and of itself, but the synthetic feel of the settings and creatures undercuts the whimsy and wonder the film is aiming for. There is a frustrating lack of soul behind the visuals, and this reviewer found himself switching off at times because there wasn’t anything to, pardon the pun, hook on to. The most egregious offenders are the skeletal Neverbirds, which look like rejects from The Nightmare Before Christmas and are straight-up cartoony in appearance, never seeming like they convincingly inhabit the landscape.

There are things about the film that work, chief of which is the title character. Australian child actor Miller is a revelation as Peter, fearlessly holding his own opposite Jackman and the other adult cast members. There’s a fine blend of confidence, impishness and vulnerability in his performance, which made this reviewer never question that he was the right choice to play Peter Pan. Miller also has enough personality such that he doesn’t come across as a too-cutesy production-line Disney Channel moppet. There’s a messiah element to this interpretation of Peter – his mother is even named ‘Mary’ – but that symbolism isn’t very meaningfully explored. Wait, Mary Darling was the mother of Wendy, John and Michael…it can’t be the same Mary, can it? This is confusing.

Jackman appears to have been paid in scenery, which he wolfs down with gusto, going the full Tim Curry as Blackbeard. He’s clearly having the time of his life, rocking the over-the-top Jacqueline Durran-designed costumes. He even gets to lead a chorus of miners in singing Nirvana’s Smells Like Teen Spirit – a delightfully bizarre anachronism that effectively highlights the “outside of time” nature of Neverland. There was never any question as to whether or not he would be entertaining, and Jackman’s sinister glee papers over some of the cracks in the well-worn story.

Captain Hook is re-imagined as a charming rogue very firmly in the Han Solo mould, with Hedlund drawling and smirking his way through the part. Hedlund is pretty bland, lacking the dangerous charisma that should hint at Hook’s destiny as Peter’s arch-nemesis. The “friend-turned-enemies” plot device is kind of tired and is yet another example of an attempt to put a spin on things that is only semi-successful at best.

Mara is also quite stiff as Tiger Lily, the Princess Leia to Hook’s Han, even though she does get to partake in the action. There was a degree of controversy surrounding the casting of a, well, lily-white actress in the part, seeing as the Piccaninny Tribe are analogous to Native Americans. In the film, the tribe is composed of various ethnicities and we even get Korean actor Na Tae-joo as martial arts fighter Kwahu, who seems awfully reminiscent of Hook’s iconic Rufio. It’s a shame that the role was white-washed, since there really is no justification for Tiger Lily not being played by a person of colour, especially given the dearth of roles in Hollywood for actors of Native American origin. On the other hand, the typically white Mr. Smee is played by Adeel Akhtar, a British actor of Pakistani origin. Akhtar displays solid comedic chops, his Smee doing a fair amount of the expected bumbling-about.

Under the guise of reinventing the story of Peter Pan, Pan walks a well-trodden path, presenting a bog-standard hero’s journey/chosen-one plot that just happens to be set in a fantastical location. There are entertaining sequences, a few genuinely creative sparks and good performances, but the CGI-heavy visuals are insufficiently enchanting and screenwriter Jason Fuchs doesn’t make many worthwhile additions to the mythology. “To live will be an awfully big adventure,” Barrie famously wrote. We guess a medium-sized adventure will have to suffice.

Summary: A middling fantasy adventure that never quite takes flight, Pan is another revisionist fairy-tale that doesn’t fully justify its existence, but should be fun enough for the tykes in the audience.