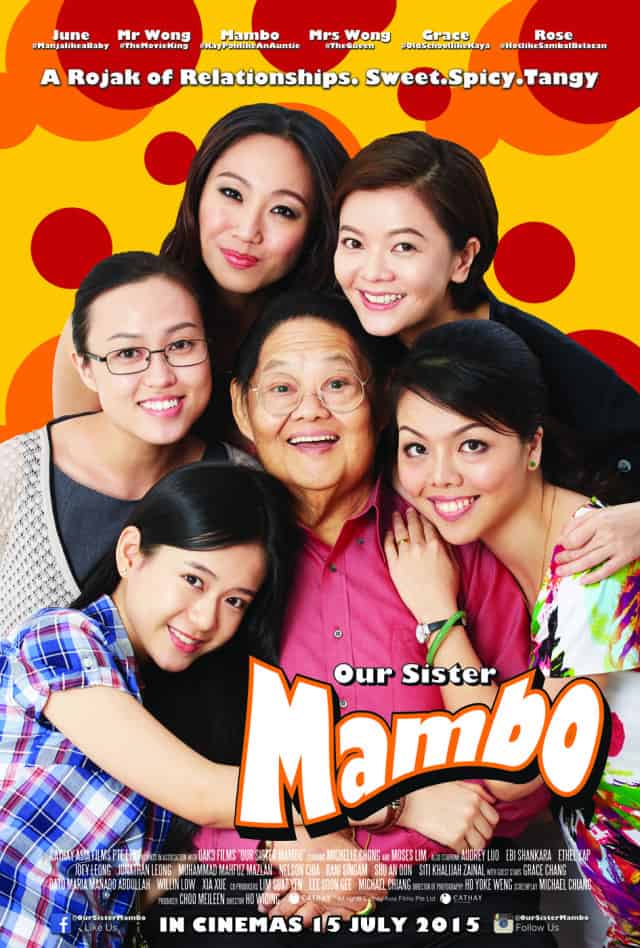 It could have been a disaster – a movie specifically designed to celebrate the 80th anniversary of Cathay Organisation, a local cinema chain? A wrong step or two, and Our Sister Mambo could well play out as a crass feature-length advertisement. Fortunately, the final film – helmed by Malaysian director Ho Wi Ding and starring a constellation of female actors led by Michelle Chong – is quite charming. The romantic comedy may be slight and occasionally silly, but it’s also sunny and sweet, with its heart very much in the right place.

The plot revolves around the efforts by Mambo (Chong), the responsible second daughter of the Wong family, to get her three sisters hitched. Big sister Grace (Yap) is caught in an uneasy courtship with a suitor from China (Nelson Chia); third sister Rose (Oon) keeps getting her heart broken by unfeeling Caucasian men; while little sister June (Leong) stumbles unexpectedly into a romantic prospect while at work. None of these options is particularly palatable to Mrs. Wong (Luo), the controlling but loving matriarch of the family, who juggles her concerns for her daughters and husband (Lim) with her obsession with Korean dramas and kimchi.

There’s a great deal to like about the warm and big-hearted Our Sister Mambo. Screenwriter Michael Chiang (of Army Daze fame) has crafted a family and a family dynamic that’s a lot of fun to be around. Each member of the Wong household is lovingly drawn, from the doting, laidback daddy to earnest, responsible Mambo, who’s about to upset her mother for once in her life by making a career choice that’s very far off the beaten track. Chiang also lends the film a hum of authenticity with a host of supporting characters (like Rani Singam’s competitive property agent and Siti Khalijah’s warbling lawyer) and a smattering of languages (from Cantonese to Tamil to Malay) that are more reflective of daily life in Singapore.

The film also handles its blend of hijinks, hilarity and heart quite well. There are plenty of farcical moments, as characters and cultures clash and misunderstandings spiral out of control. We’re invited to recognise (and laugh at) ourselves as Mrs. Wong gives into the K-Fever currently sweeping the nation. But the quieter, more tender moments are the ones that linger after the lights go up. Anyone who’s fought with a parent or tussled with a child would identify with Mrs. Wong’s gradual realisation that it’s better for one’s children to be happy, even if that happiness looks nothing like what one might have envisioned for them.

It’s a good thing, too, that the subplot about Cathay’s 80th anniversary – which is tied up with Mr. Wong’s life-long job as a cinema manager – radiates nostalgia rather than commercialism. In that sense, Our Sister Mambo, which takes inspiration from 1957 Cathay film Our Sister Hedy, is less a 90-minute commercial than a love letter to a time gone by. Even if you’re quite unfamiliar with Cathay’s output in the 1950s and 1960s, there’s something undeniably lovely about once again getting the chance to see the faces and hear the voices of long-lost film stars.

That’s not to say, of course, that Our Sister Mambo is problem-free. The film tends to shamble along in episodic bursts, its various storylines wrapping up more conveniently than realistically. Commercial considerations also, invariably, rear their heads in the form of ‘celebrity’ cameos – there’s a good enough reason for chef Willin Low to turn up, since he’s the one who must sneer Gordon Ramsay-like at lawyer-turned-aspiring-chef Mambo’s culinary experiments. But there isn’t much of an argument made for shoehorning celebrity blogger Xiaxue into the mix, beyond hoping that her followers will watch the film in cinemas.

The cast is, on the whole, very good indeed – if you’re able to overlook the fact that Chong is older than the actresses who play both her elder sister and her mother in the film! In fact, Luo, a theatre actress who quite often plays twenty years older than her actual age (which is much easier to do on stage than on screen), is easily one of the best things about the film. She is such a credible matriarchal figure, brimming over with oceans of concern and frustration and love, that you’ll find yourself buying into her character even as you constantly wonder how she could possibly be old enough to mother four daughters who are well into their adulthood. Chong shares a nice camaraderie with Yap, Oon and Leong, while Lim adds his trademark jocularity to his role as the only man in the house.

Our Sister Mambo is far from deep, dark or groundbreaking. But, for what it is, this lighthearted effort is one of the more enjoyable local films in recent memory. There’s so much genuine warmth and affection here for the story, the characters and the world in which they live that it becomes far easier to overlook the film’s flaws and its relative lack of ambition.

Summary: Slight and silly, but also sunny and sweet.