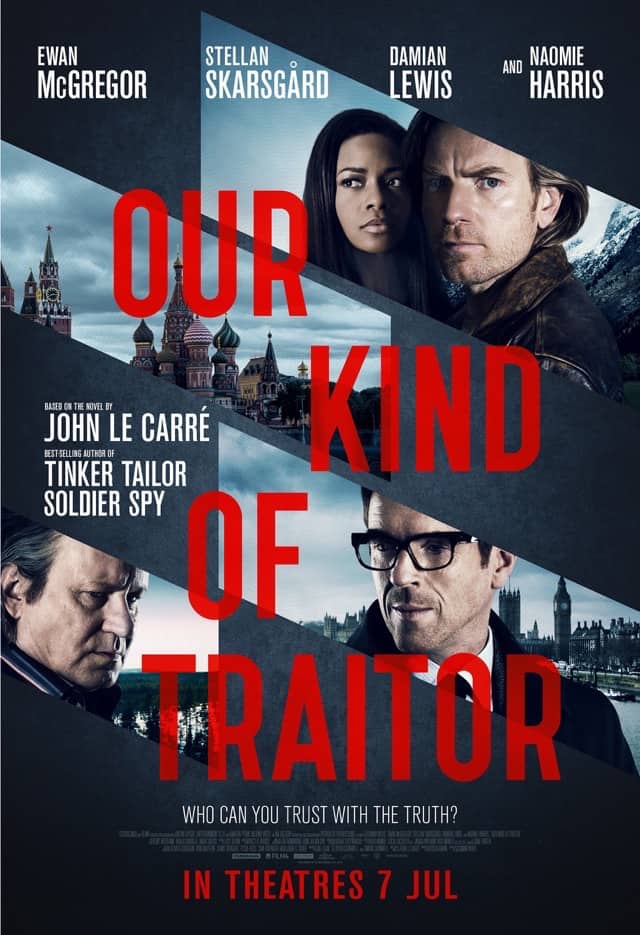 Both Ewan McGregor and Damian Lewis appeared in the largely forgotten Stormbreaker and now reunite for a spy film of a very different stripe. McGregor plays Perry Makepeace, a poetics professor on holiday in Marrakech with his wife Gail (Harris). In a Moroccan restaurant, Perry befriends Dima (Skarsgård), who turns out to be the chief money launderer of the Russian Mafia. A powerful underworld player known as The Prince (Grigoriy Dobrygin) killed one of Dima’s associates, so Dima fears for the safety of his family, and enlists Perry in delivering key information to MI6, information that implicates powerful English bankers and politicians in colluding with the Russian Mafia. MI6 agent Hector (Lewis) naturally has his suspicions – can Dima be trusted? Why would he choose Perry as his messenger? Gail is also frustrated that her life has become upended because of her husband’s sudden involvement in this risky enterprise.

Our Kind of Traitor is adapted from the John le Carré novel of the same name. Our Kind of Traitor joins the illustrious list of films based on a Le Carré books, including A Most Wanted Man, Tinker Tailor Soldier Spy, The Constant Gardener and The Spy Who Came In from the Cold. One expects a Le Carré adaptation to boast a cerebral quality, leaning more on politics and interplay than chases and gunfights. Our Kind of Traitor is a slick and stylish picture, director Susanna White delivering a product with all the trappings of a spy thriller. While White is an accomplished television director, this is only her second feature, after Nanny McPhee and the Big Bang, and it does feel like the work of someone who is a dab hand at assembling thrillers. The exotic, glamourous locations include Marrakech, London, Paris, Bern and the Swiss Alps, and Oscar-winning cinematographer Anthony Dod Mantle is on hand to lend the visuals poetry and polish.

Our Kind of Traitor certainly looks the part, but the story never seems sufficiently grounded, with pretty big leaps of faith asked of the audience. There is a degree of intrigue to the premise: regular folk are yanked into the cloak-and-dagger realm of spies and gangsters. However, we never get a satisfyingly logical explanation for Perry’s involvement, and the story relies on several convenient turns in the plot to progress. While McGregor is an amiable leading man, Perry finds himself out of his depth and yet gets willingly strung along so often that it’s hard to not think of the character as exceedingly naïve. It seems the character is stuck in “sure, whatever you say” mode for the duration of the film, which can be frustrating. The tension between Perry and Gail, the two somewhat unhappy ten years into their marriage, does not get sufficient development.

Skarsgård’s Dima is gruff yet friendly, at once suspicious and charming. While the Russian accent he attempts isn’t great, Skarsgård manages to be convincing as a high-level mob figure who has had a change of heart and now fears for his life. There’s a warmth to him and a real sadness in the actor’s eyes when Dima needs to be vulnerable. Alas, the portrayal of the Russian Mafia doesn’t offer many insights, sticking close to the stereotypes and perceptions most already have, instead of delving into the inner workings of the criminal organisation. Lewis looks right at home in a film of this sort, but there isn’t much nuance he can bring to the role of Hector, who mostly stands about looking stern.

Our Kind of Traitor may not be the most involving or intricate spy yarn ever, but competent performances and glossy production values go a good way to papering over the cracks in the story. There is a bit of a lull in the middle, but the intrigue and smatterings of violence help to push it along.

Summary: It’s pretty to look at and ticks most of the spy thriller boxes, but thanks to an almost laughably gullible protagonist and a general lack of intensity, it’s not particularly easy to get into.