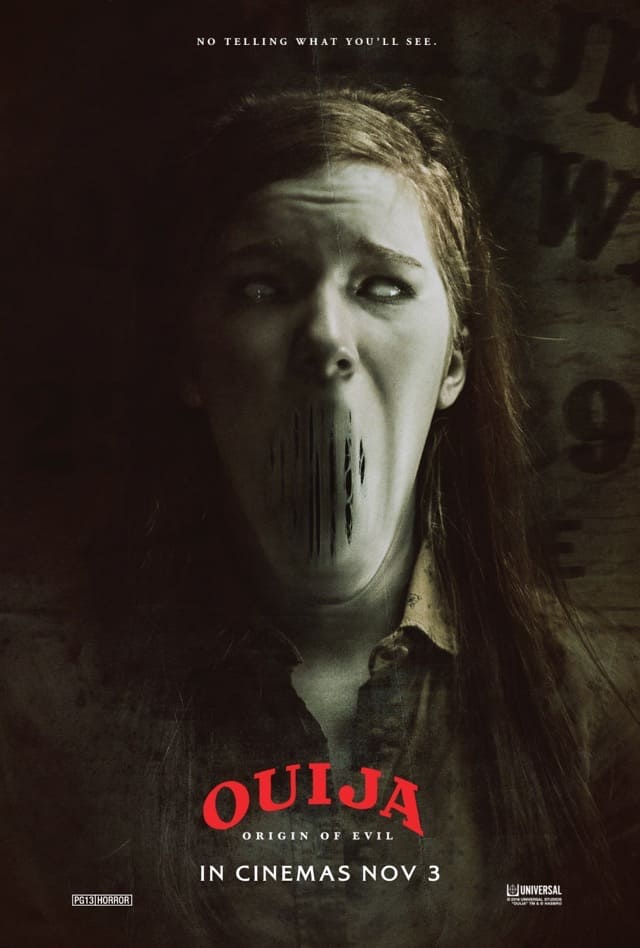 There’s probably no other product with a movie-long infomercial proclaiming “buy our board game, unspeakable terrors lie in store!” In this prequel to 2014’s Ouija, we meet the Zander family. It is 1967, and Alice Zander (Reaser), with her daughters Lina (Basso) and Doris (Wilson), perform séances. Using props and special effects, Alice simulates activity from the spirit world, rationalising to Doris that this is her way of helping others find closure. When Lina and her friends play a board game that purports to be a method with which the dead can be contacted, Alice incorporates the Ouija board into her act. Doris attempts to use the board to speak to her late father Roger, unwittingly unlocking a host of terrors and becoming demon-possessed. An alarmed Lina goes to her school’s principal Father Tom (Thomas) for help, as the dark history behind the hauntings is gradually unveiled.

2014’s Ouija was largely dismissed as a cash grab, yet another economical horror franchise for production company Blumhouse to churn out. It used the tired formula of unlikeable kids getting picked off one by one. This prequel is a colossal surprise in that it is legitimately good, not just “better than the first Ouija”.

Writer-director Mike Flanagan crafts a loving homage to the domestic horror films of the 60s and 70s, with the influence of The Exorcist strongly felt. There’s a gratifying attention to period detail in the sets, cars, costumes and dialogue. The film opens with the old-school Universal Studios logo, and there are even blemishes which mimic cigarette burns on the film reel. Alice is seen painting the Ouija planchette in order to make it look authentically aged, and the mechanisms that she uses to execute her con are all pretty nifty. It’s a clever narrative trick: establish that none of this can’t possibly be real, so when things actually start going bump in the night, it’s all the more unnerving.

Instead of feeling gimmicky, Ouija: Origin of Evil has a story with reasonable emotional heft to it. It deals with bereavement, and the door to the other side is unlocked as a result of Doris’ innocent desire to talk to her deceased father once more. Our three leads are all compelling in their own ways: we forgive Alice’s deception because we see she’s trying to make ends meet and provide for her kids in the aftermath of a tragedy. Reaser, best known as Cullen family matriarch Esme from the Twilight series, is remarkably authentic. Basso’s fiery defiance and scepticism is magnetic instead of obnoxious, the push and pull between mother and daughter providing most of the conflict. Wilson gets to be the creepy kid, and she’s awesome at it – not every child actor can withstand a slow push-in and completely sell the idea that there’s an otherworldly evil deep within them.

Remember Elliott from E.T.: The Extra-Terrestrial? Of course you do, it’s one of the most memorable child performances ever put on screen. As such, it’s nice to see Henry Thomas in a film. He’s been working since E.T., but never in anything with that high a profile. Thomas has a comforting presence about him, but there’s also a discernible creepiness lurking just below the surface, such that we’re never sure what exactly the make of Father Tom.

Ouija: Origin of Evil is hair-raising without relying on gratuitous gore. There are several disturbing images, just the right number of jump scares, and a demon/ghost played by renowned physical actor Doug Jones. Unfortunately, when the film relies on digital effects to conjure up traditional exorcist movie shenanigans (Cirque du Soleil-style contortions and scuttling along walls and ceilings, eyes clouding over), things look a mite goofy. For all of the first Ouija film’s teen aimed-ness, Origin of Evil has a truly harrowing climax and does take chances with its ending, instead of going down a predictable horror movie path.

This has got to be one of the most impressive franchise saves we’ve seen yet, with Flanagan rescuing the fledgling Ouija film series from the teeny-bopper horror doldrums. Committed performances, well-executed scares, period detail that suggests a larger budget than it actually has and a spine-tingling back-story make this a horror flick that’s several notches above average. Stick around past the credits for a stinger which connects this film to the 2014 one.

Summary: Nobody could blame anyone for being skeptical about the follow-up to the ho-hum teen horror that was Ouija, but colour us completely surprised: Origin of Evil is scary good.