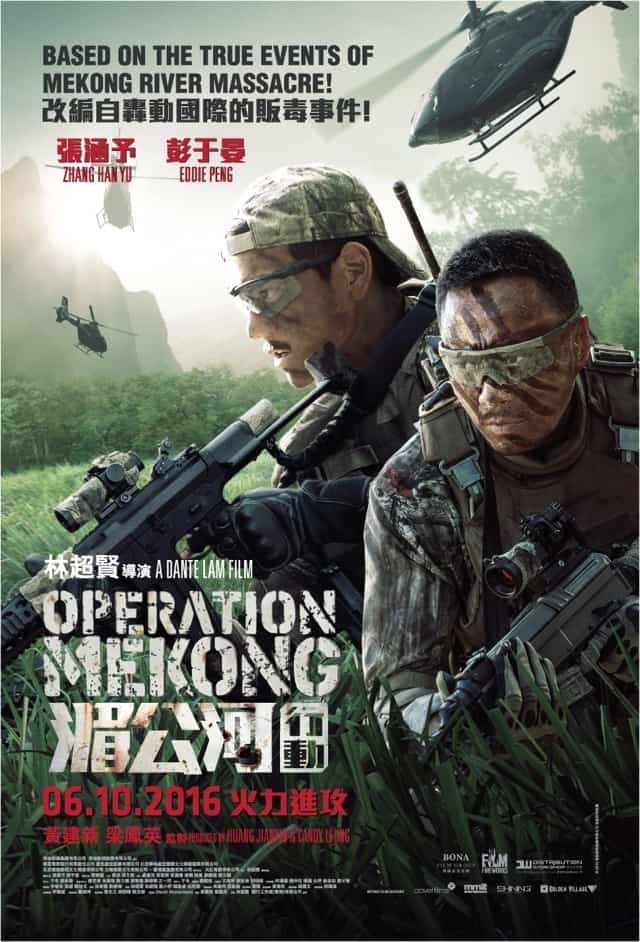 Director Dante Lam takes us downriver in this action-thriller inspired by actual events. On the morning of October 5th 2011, two Chinese cargo ships were ambushed on the Mekong river, with all 13 crew members aboard both vessels killed. 900,000 meth pills are later recovered. In retaliation, the Chinese government dispatches a team of elite narcotics officers, led by Captain Gao Gang (Zhang), to the Golden Triangle. The region, where the borders of Myanmar, Laos and Thailand meet, is a notorious drug-trade hotbed. Intelligence agent Fang Xinwu (Eddie Peng), formerly a narcotics officer and now based in the Golden Triangle, joins Gao’s crew. Their undercover investigation discovers that the attack was masterminded by drug lord Naw Khar. The governments of Thailand, Laos, Myanmar and China launch a joint task force to capture Naw Khar, igniting a fierce battle that sets the Golden Triangle ablaze.

Lam is not a director known for his subtlety. The behind-the-scenes footage of The Viral Factor reveals that he fires a pistol into the air before calling “action” to get himself hyped up. Even Michael Bay doesn’t do that. We find ourselves in a bit of a catch-22 with Operation Mekong: on one hand, Lam ostensibly wants to pay his respects to the 13 victims of the Mekong River attack, dedicating the film to them and listing the deceased by name. On the other, he wants to make this as explosive a high-octane extravaganza of bullets, explosions and blood splatter as he can. We’ve got shootouts galore, chases on land, water and in the air and some pretty brutal knife-fighting too. Lam has plenty of flair and while some of his stylistic flourishes come off as unnecessary, the flashiness and dynamism do keep things very exciting.

The problem here is that Lam doesn’t seem aware that one can’t quite get away with typical over-the-top genre hijinks in a film that is purportedly based on a true story. One factor that makes the macho ’80s action flicks starring Arnold Schwarzenegger, Sylvester Stallone, Jean-Claude Van Damme and stars of their ilk so entertaining is that we know it’s not meant to reflect reality. Audiences cheer when the hero utters a zinger after the bad guy is blown to bits, with the knowledge that this is silly and that’s fine. Lam claims to have undertaken three years of research and preparation to do the story justice. The scenarios depicted are so overblown, with the characters hewing so closely to established action movie tropes, that we’d be surprised if even 10% of the actual events went down the way they are depicted in the movie.

Standing in the way of any credibility is how much this feels like the ‘Hollywood version’ of the aftermath of the Mekong River attack. It’s like the direct result of someone watching a hundred action movies and then being turned loose to write one of his own. The elite team’s codenames are all figures from ancient Greek mythology – naturally, ‘Panoptes’ is the tech guy in charge of surveillance drones. Panoptes was the giant with a hundred eyes, get it? It’s a screenwriter’s conceit if there ever was one.

Lam evidently seems to enjoy working with Peng, who starred in the director’s previous films Unbeatable and To the Fore. The character is the inside man who has taken up a post far away from home to get away from a tragic occurrence in his recent past. When said event is revealed, it’s almost unbelievably clichéd. Peng’s very pretty visage is adorned with a hilarious assortment of fake facial hair, as part of Xinwu’s disguises.

Zhang is appropriately gruff and steadfast as the team leader, a ‘father to his men’ type. In an attempt to give the character pathos, we see him forlornly watching video calls sent from his young daughter. There isn’t a lot of characterisation given to the other team members – for example, Joyce Feng Wenjuan’s Aphrodite is ‘the female one’, and that’s about it. The villains are every bit as exaggerated as one might expect: we even get a scene of a crazed drug lord stuffing a fistful of cocaine into his face in frustration, just before his base is attacked. The villains are all adequately despicable and we witness some ghastly atrocities, but they’re nearly as cartoonish as the Golden Triangle drug traffickers depicted in Tropic Thunder.

The standout performer is Bingo the German Shepherd. Yes, there’s a team pet. Animal-lovers, be prepared to wince as the dog finds itself in the thick of some pretty harrowing situations.

Speaking of atrocities, child soldiers figure heavily in the plot. This reviewer did feel pretty uncomfortable watching two kids play Russian Roulette in a ‘Deer Hunter Jr.’-type scene. Real-life drug lords do enslave child soldiers but a topic like that needs to be handled with some sensitivity and feels quite out of place in a rip-roaring action flick.

Location filming and elaborately-staged action sequences indicate that a fair bit of effort was put into Operation Mekong. This reviewer was entertained by the big action set-pieces, notably a deal gone horribly awry in a crowded shopping mall. However, it’s hard to shake the feeling that Lam would have been better off making a wholly fictional film, instead of sticking ‘based on a true story’ onto this balls-out shoot ’em up bombast.

Summary: Action junkies will be satiated but everything in Operation Mekong is so overblown that it flies straight past ‘taking artistic license’ into the realm of the patently ludicrous.