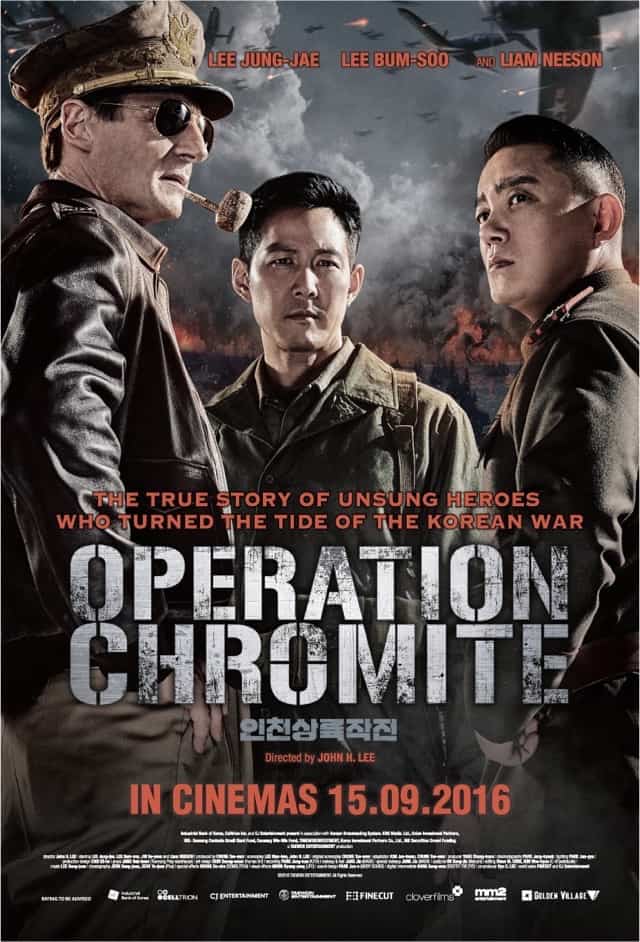 While there are many films inspired by the events of the Second World War and the Vietnam War, it seems the Korean war doesn’t get explored onscreen as much. Operation Chromite tells of a covert squad of Korean Liaison Office (KLO) operatives, going undercover as a North Korean inspection unit to infiltrate the North Korean stronghold of Incheon. The squad is led by Jang Hak-soon (Lee Jung-jae), who is impersonating North Korean officer Park Nam-cheol. The mission directives from American general Douglas MacArthur (Neeson) are to scope out the North Korean command centre, locate the mine chart so the UN command can navigate the waterways, kidnap key North Korean personnel, and secure the lighthouse so the Incheon landing can take place at night. Senior North Korean colonel Lim Gye-Jin (Lee Beom-soo) begins to suspect that “Park Nam-cheol” isn’t all that he seems, with the mission in jeopardy at every turn.

Operation Chromite has all the makings of a compelling war film, with a team of spies deep behind enemy lines racing against the clock and trying to preserve their cover as our heroes. Director John H. Lee has made a film about the Korean war before – 71: Into the Fire focused on student-soldiers defending a middle school from North Korean troops. He reunites with that film’s writer Lee Man-hee here. Unfortunately, Operation Chromite is marred by a sometimes staggering lack of subtlety. Emotional scenes are smothered by a maudlin piano score, melodramatic moments play out in slow motion and the script is laden with laughable proclamations that are meant to be taken deadly seriously.

Even though the computer-generated battleships and planes aren’t terribly convincing, the production values generally pass muster. Several action sequences are suitably intense and engrossing, creating a sense of frenzied chaos. There’s a visceral effect to the gunfire and explosions, and while such scenes border on being overblown, they keep the film exciting. The stakes are established and when our heroes are in mortal danger, this reviewer did want to root for them. Unfortunately, meaningful characterisation is in short supply, and Operation Chromite falls back on oft-parodied war movie clichés. There’s a soldier who invites his friends over to his house after the war, saying his wife “makes the best noodles” – we’re sure he’ll emerge from the battlefield just fine.

Lee Jung-jae exudes a noble heroism and is nicely restrained even as the film around him gets increasingly overwrought. It makes sense that this is a leader whose men would die for. Sure, he’s a little boring, but we think that’s better than being blustery and showy. If over-the-top performances are what you’ve come in search for, fret not: Lee Beom-soo does a nigh-criminal amount of moustache twirling as a villain who wouldn’t be out of place in an Indiana Jones movie. Lim Gye-Jin is as smug as he is bloodthirsty – he’s threatening, but also quite silly. A cold, steely foe might’ve been considerably more effective.

The marquee name and big ‘get’ is, of course, Neeson. When asked why he took on the role of General MacArthur in the notorious flop Inchon, legendary actor Sir Laurence Olivier memorably replied “money, dear boy”. Neeson appears to be keeping that tradition going here. Neeson is as good an embodiment of commanding, swaggering masculinity as any actor alive, but his portrayal of MacArthur amounts to little more than a cartoon character. Even given MacArthur’s reputation as a larger-than-life historical figure, the portrayal is difficult to buy. It’s substantially more screen time than Neeson had in, say, Battleship, but Neeson just doesn’t get all that much to do besides arguing with Air Force chief of staff Hoyt S. Vandenburg (Gries) and spouting ridiculously cheesy lines. One scene in which MacArthur triumphantly quotes the Bible had this reviewer bursting into a laughing fit.

North Korea has decried Operation Chromite as “ridiculous bravado from ignorant lunatics,” which really is the best endorsement of all. It’s fuelled by chest-thumping South Korean patriotism, but it’s only natural that a war film is pitched as a crowd-pleasing tribute to national heroes. It’s made with noble intentions and has its thrilling moments, but a sense of artifice pervades Operation Chromite. Lacking insightful sophistication, it comes off as even more of a “Hollywood version” of events than if it actually were a Hollywood production.

Summary: Audiences at large may not be as familiar with the Korean war as other military conflicts, but Operation Chromite’s many war movie clichés are easily identifiable.