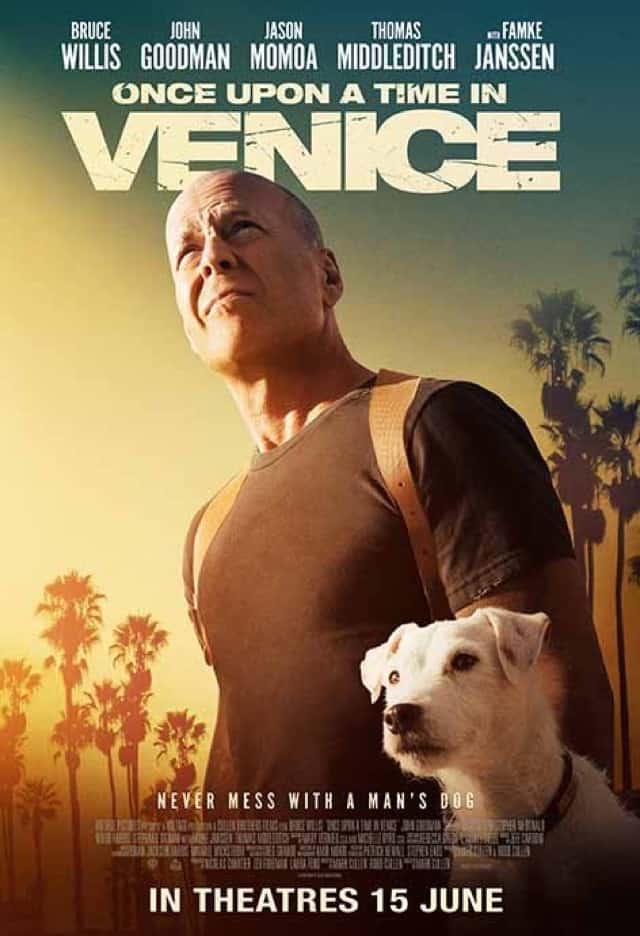 In this action comedy, Bruce Willis is a dick. A private dick. Willis plays Steve Ford, a disgraced former LAPD officer who has set up shop as a detective. Steve’s domain is the Venice Beach area of Los Angeles, and with the help of his beleaguered assistant John (Middleditch), Steve helps track down missing persons. The house of Steve’s sister (Janssen) is burgled, with Buddy, Steve’s beloved Parson Russell Terrier, among the stolen items. The culprit, a drug lord named Spyder (Momoa), holds Buddy hostage, demanding that Steve run several errands for him before he can have his dog back. With the help of John and surf shop proprietor Dave (Goodman), Steve must retrieve Buddy by any means possible.

Willis has been absolutely slumming it in direct-to-DVD action movies, continuing that streak with Once Upon a Time in Venice. The movie is written and directed by brothers Mark and Robb Cullen, who wrote the Willis-starring Cop Out. It’s painful to watch Once Upon a Time in Venice strain so hard to be even remotely funny. This is listless, incoherent stuff which feels like it was rejected from a network TV comedy. The best set-piece, which involves Steve skate-boarding buck naked, takes place early in the movie, with nothing approaching that level of zaniness for the rest of its duration.

The premise and the posters try to sell this as a John Wick spoof, and Once Upon a Time in Venice would have been much better had it actually been an all-out parody of John Wick. There are also shades of the far more energetic and innovative Keanu, in which a hitman’s missing cat was the linchpin of the plot. Even with swearing, nudity and violence, Once Upon a Time in Venice fails to generate even a scintilla of excitement.

The cast that the Cullen Brothers has at their disposal is not too shabby. Willis is a shadow of his former A-lister self but his declining clout notwithstanding, he still was John McClane. One would think any filmmaker would be smart enough to play up that persona in an action comedy. Silicon Valley star Middleditch can play neurotic without being unbearably annoying, but in this movie, he’s saddled with dreadfully unfunny lines. The voiceover he performs is grating.

The dependable, talented John Goodman is completely wasted, and this movie makes poor use of Jason Momoa as well. He spends most of Once Upon a Time in Venice lounging around, participating in very few action scenes. Janssen shows up for a couple of scenes, and swimsuit model Jessica Gomes is only in this movie so she can go topless. She has a sex scene with Willis, who is 30 years her senior, which is as awkward as it sounds. Adam Goldberg plays a character named “Lou the Jew”, in one of several uncomfortable moments in which mild anti-Semitism is played for laughs. Kal Penn plays a store clerk in one scene, veteran character actor Christopher Macdonald shows up in a throwaway part, and for no discernible reason, there’s a David Arquette cameo.

Summary: A dismal demonstration of how low erstwhile movie star Bruce Willis has sunk, Once Upon a Time in Venice will test the tolerance of even the most hardened direct-to-DVD action movie connoisseur.