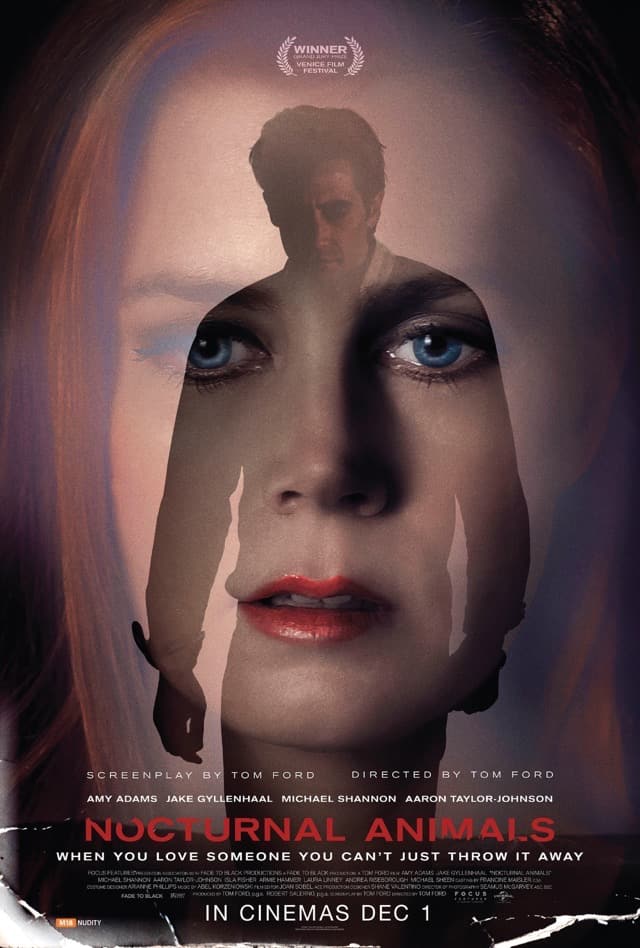 Tom Ford shows off his night moves in his second directorial effort, a neo-noir psychological thriller. Susan Morrow (Amy Adams) is a wealthy L.A. art gallery owner, whose relationship with her second husband Hutton (Armie Hammer) has soured. Susan receives a manuscript from her ex-husband Edward Sheffield (Jake Gyllenhaal), titled ‘Nocturnal Animals’ after Edward’s nickname for Susan and dedicated to her. The novel centres on Tony Hastings (also Gyllenhaal), a mild-mannered man whose wife Laura (Isla Fisher) and daughter India (Ellie Bamber) are abducted after a violent encounter with local ruffians during a road trip through Texas. Detective Bobby Andes (Michael Shannon) helps Tony track down the culprit, handyman Ray Marcus (Aaron Taylor-Johnson), in the hopes of finding Laura and India. The brutality and rawness of the story shocks Susan, who reflects on the circumstances that led to the dissolution of her marriage with Edward. With Edward back in town and Hutton away on business, old wounds are reopened as Susan plans to meet with Edward for the first time in years.

Nocturnal Animals is based on Austin Wright’s 1993 novel Tony and Susan. In addition to directing, Ford adapted the novel for the screen and produced the movie, meaning that his stamp is all over the film. Ford’s directorial debut A Single Man was critically acclaimed and netted star Colin Firth and Oscar nomination. Critics and audiences were curious to see what Ford would follow the period piece with. While it is reductive to say that Nocturnal Animals is a case of “style over substance”, that’s essentially true. Ford has a distinct vision, but much of the imagery can’t help but come off as pretentious. We realise we’ve dug ourselves a hole by trucking out the ‘p’ word, but bear with us. Nocturnal Animals is at once subtle and overwrought, and we have a feeling that this was intentional. Ford appears to enjoy toying with the form and the ‘story within a story’ structure, but it’s difficult to get at what the film really is about.

Two stories sit side-by-side and gradually intertwine. The ‘real world’ is cold and manicured, while the world of the novel is earthy, gritty and raw. The transitions which jolt us out of the book’s narrative and back into Susan’s reality are effective, and there are moments of intensity which reel the viewer in. However, the larger approach seems designed to hold the audience at arm’s length, and there’s the sense that Ford is playing a game of pushing us away then pulling us close as he pleases. Individually and stripped of the atmospherics provided by Seamus McGarvey’s cinematography, neither of the two stories is all that riveting. There’s some satisfaction to be derived in seeing how they fit together, but one can almost feel Ford dancing about behind the camera, shouting “isn’t this all very artsy? Isn’t that delightful?”

As Nocturnal Animals parcels out information about Susan and Edward’s marriage, there are heart-rending scenes and the film approaches being relatable. In a flashback, Susan’s obnoxious mother Anne (Linney) haughtily cautions against marrying Edward. Anne warns her daughter that as a writer, Edward won’t be able to make a stable living, and the qualities she’s drawn to will soon be the things she hates most about him. This is a scene straight out of this reviewer’s nightmares. The film conveys the tumult of the creative process, how difficult it is to make a living as an artist and the price one has to pay for falling in love with a creative type. Its portrayal of heartbreak rings true, but this is buried beneath layers of posturing and overblown metaphors.

The performances contain glimmers of shattering power, but many scenes are also stilted and over-directed. Adams has proven herself to be an actress of considerable depth, getting across the war that roils within Susan without resorting to histrionics. Clad in Arianne Phillips-designed costumes, Adams is the picture of glamour – this is, of course, a façade.

Gyllenhaal plays both Edward and the author’s surrogate within his novel, Tony. The violent revenge tale set against the dusty, desolate west Texas landscape is reminiscent of True Detective or Justified, and Gyllenhaal does enough to differentiate Edward and Tony. Tony is the physical manifestation of Edward’s angst, a vehicle for the author’s catharsis. It’s a moving turn from Gyllenhaal, but it can also be perceived as a romanticising of the “tortured artist” archetype.

Shannon is at his best when he gets to be nuanced, since he is often typecast as blustery villains. Bob Andes is the archetypical crusty small-town sheriff helping the stranded outsider, a southern-fried seeker of justice. Shannon brings what could have been a cartoon character to three-dimensional life. In the meantime, Taylor-Johnson’s Ray is equal parts pathetic and menacing, though he does have trouble with the accent.

The aloof, handsome and ultimately unfaithful husband, Hammer’s Hutton Morrow is a walking plot device. Linney, Andrea Riseborough, Michael Sheen and Jena Malone all show up for one scene each, filling out Susan’s social and professional circle. Ford has some fun in casting with a metafictional eye – Adams and Fisher are often called looklikes, and Fisher plays Adams’ surrogate in the story-in-a-story. In Tony and Susan, Tony and Laura’s daughter was named Helen. In the film, Helen is renamed ‘India’. Susan’s adult daughter Samantha is played by India Menuez. It was fun tid-bit to discover.

Like the contemporary art that fill’s Susan’s gallery, some will laud Nocturnal Animals as deep and wise, while others will dismiss it as showy and hollow. The striking visuals and impactful vignettes make this worth a look, but the film’s refusal to arrive at a point and flights of arthouse fancy are often alienating.

Summary: If you’re prone to using “artsy-fartsy” as a dismissive term, Tom Ford’s sophomore work as a filmmaker will leave you cold. However, there are moving performances and heart-rending statements about love and art that resonate.