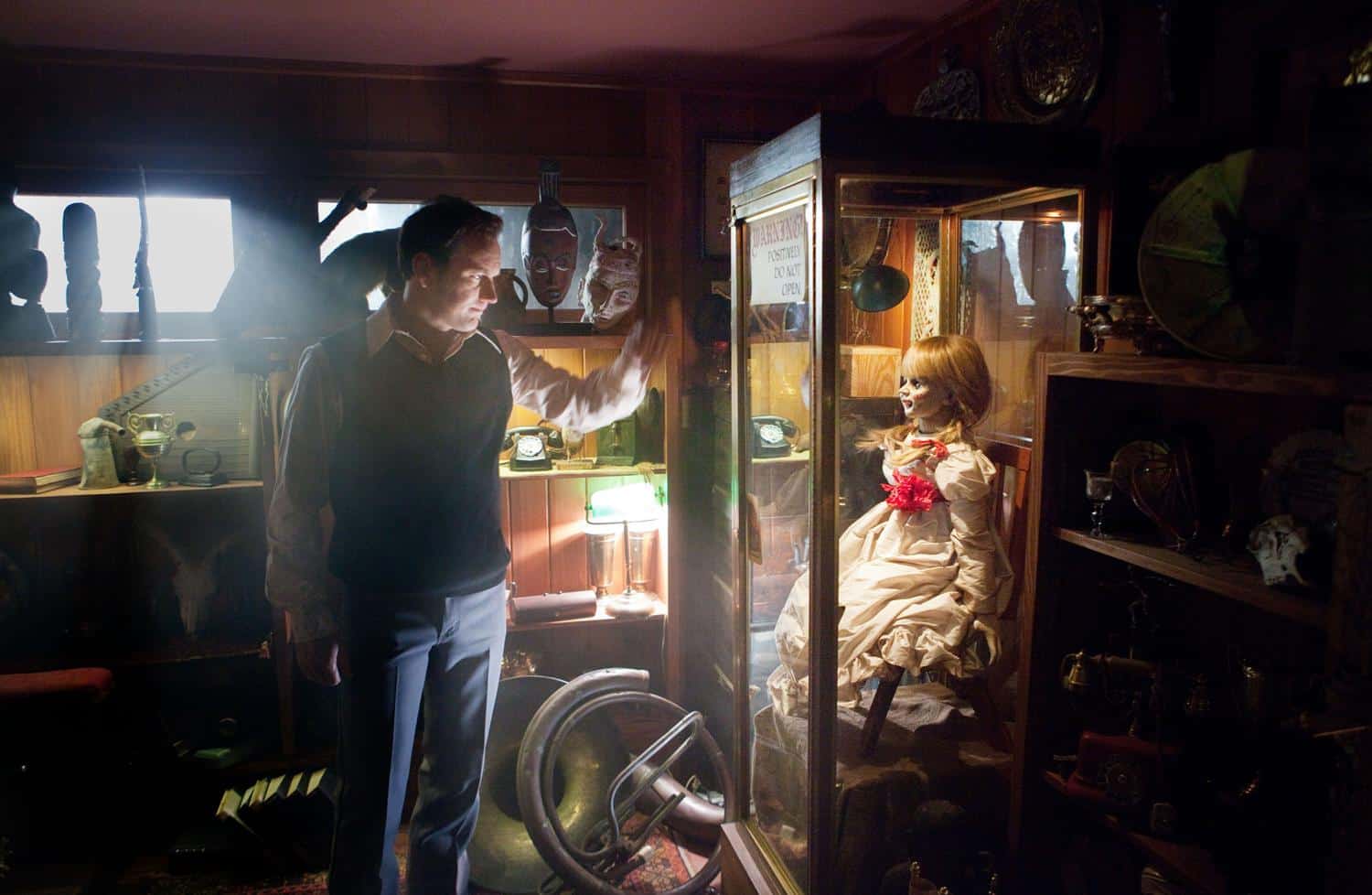 But Annabelle isn’t the only possessed object to terrorize those who fall into its possession. History is full of accounts of objects that seem possessed by forces beyond the grave.

Here are the infamous 10… 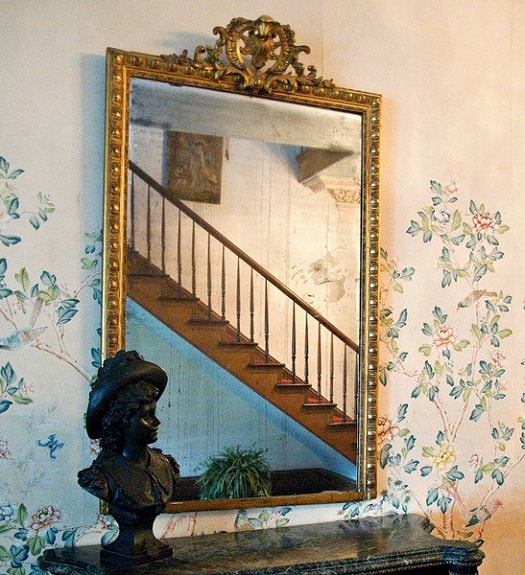 Known as one of America’s most haunted homes, and the alleged site of as many as ten murders, this antebellum mansion in St. Francisville, Louisiana, also boasts a highly mysterious mirror. Purchased by the home’s owners sometime three or four decades ago, the mirror is said to contain the ghosts of Sara Woodruff—the original mistress of the house—and her children. Custom dictates that mirrors should be covered when someone dies so that the soul of the deceased doesn’t get caught in the mirror instead of ascending to heaven. Apparently, at Sara’s death, the mourners abandoned tradition. Now, visitors at Myrtles Plantation have reported seeing handprints materialize in the mirror and long drip marks, which no amount of cleaning can remove. 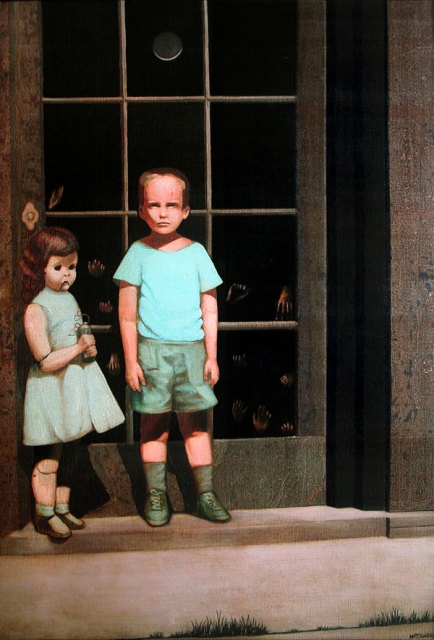 A sullen boy with sightless eyes stands in front of a door next to a creepy girl doll with a vaguely ventriloquist smile and jointed limbs. Behind them, several pairs of childish hands are pressed against the glass of the door. Painted by artist Bill Stoneham, “The Hands Resist Him” is considered one of the world’s most haunted artworks. In 2000, a California couple put the eerie picture up for sale on an online auction site with a warning to potential buyers. Apparently, come nightfall, the figures in the painting would move or disappear, or the odd-looking boy would actually enter the room where the painting hung. People who viewed the painting complained of feeling sick or weak, or as if unseen hands were grabbing them. According to Stoneham, the painting is based on a childhood photograph of himself at age 5. The doorway symbolizes a threshold between worlds. The doll acts as his guide through this world in between waking and dreaming. The hands represent “other lives.” While Stoneham was surprised by all of the supernatural speculation surrounding the painting, he did concede that both the owner of the first gallery to ever show “The Hands Resist Him” and the art critic who reviewed it both died within one year of first seeing the painting.

In the summer of 1702, Thomas Busby strangled his father-in-law Daniel Awety when he found Awety sitting in Busby’s favorite oak chair. Arrested, tried, and condemned to death, Busby’s last request on the way to the gallows in Thirsky, England, was to stop in at his favorite pub and drink ale in his favorite chair. When he finished his drink, he declared, “May sudden death come to anyone who dare sit in my chair.” The chair remained in the pub for centuries, and allegedly anyone who sat in it later died from some unseen misfortune. Since 1972, the chair has hung from the ceiling of the Thirsk Museum in North Yorkshire, England, so no one can sit in it … even accidentally. 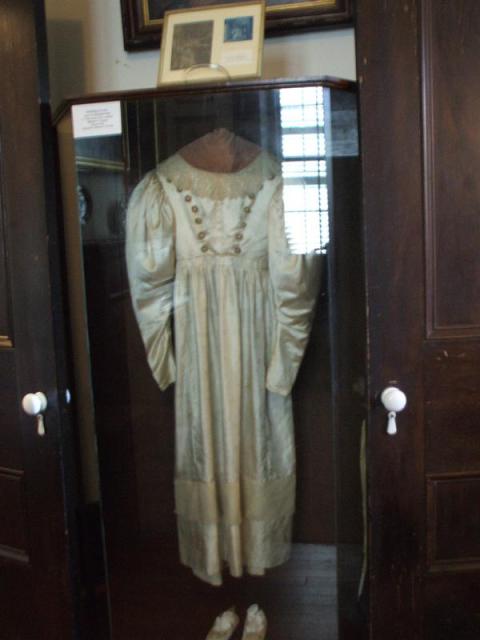 In 1849, wealthy Anna Baker fell in love with a low-class steel worker, but her class-obsessed father, Elias, forbade the marriage and drove Anna’s beloved away from their hometown of Altoona, Pennsylvania. Anna died a bitter and broken-hearted woman. Eventually, the Baker Mansion was transformed into a museum and visitors could view Anna’s unused wedding dress inside a glass case in her bedroom. Reportedly, the garment is haunted—often seen moving on its own side to side or shaking violently within its glass case. The mansion is also reportedly the site of other hauntings. David Baker, Anna’s brother, was killed in a steamboat accident in the winter of 1852. Screams have been heard from the basement where David’s body was stored until the ground thawed enough for him to be buried. 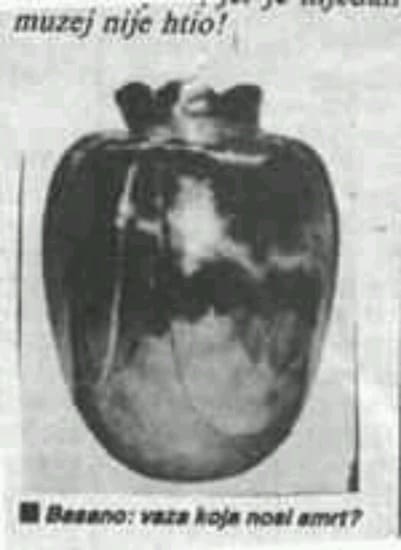 For the morbid interior decorator, the Basano Vase would make a perfect companion piece for Thomas Busby’s killing chair. This 15th century vase was made for an Italian maiden on her wedding night. The young bride died that night, clutching the vase and vowing to seek her vengeance. Each family member who inherited the vase died, until it was finally hidden away. It is unclear if the vase was eventually buried in sacred ground, but it was finally unearthed in 1988 with a note inside reading: “Beware…this vase brings death.” The vase was sold to a pharmacist who reportedly died three months later, as did the 37-year-old surgeon who owned it next. The last owners were so desperate to rid themselves of it, they tossed it out the window, where it hit a policeman on the head and nearly killed him. The family refused to take the vase back. The vase was allegedly reburied in a lead coffin waiting to be discovered again. 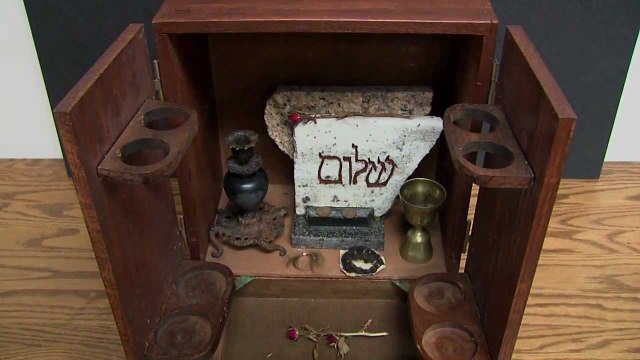 A Dibbuk box, according to Jewish folklore, is a wine cabinet haunted by a restless, evil spirit. In 2001, an antique buyer in Portland, Oregon, attended an estate sale at the home of a 103-year-old Jewish woman—the only member of her family to survive the Holocaust. Among her possessions was the odd cabinet. The woman’s granddaughter reportedly told the dealer that her grandmother had always kept the box hidden because it contained a malevolent spirit called a ‘dibbuk.’ The dealer soon learned firsthand about the power of the captive spirit, claiming the doors and gates to his art studio locked by themselves and the air inside began to reek. When he gave the box to his mother as a gift, the woman suffered a major stroke. Weeping uncontrollably in the hospital, his mother spelled out H-A-T-E-G-I-F-T. Frantic, the dealer decided to list the box on an online auction site, along with a story detailing its horrifying provenance. A museum curator named Jason Haxton purchased the Dibbuk Box, and wrote a book about its history. 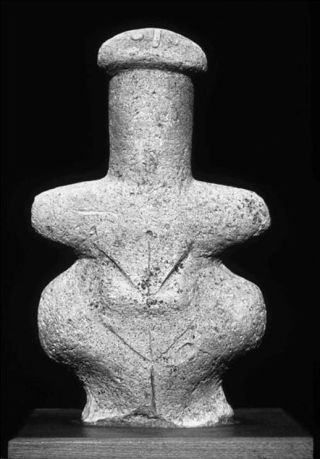 Discovered in 1878 in Lemb, Cyprus, This pure limestone statue is believed to be a fertility goddess. But rather than blessing the beholder with life, the crude figure, which dates from 3500 B.C., allegedly brings a legacy of death to all who handle it. The bad luck began with the figure’s first owner, Lord Elphont. Within a six-year period of Lord Elphont’s possession of the idol, all seven members of his family supposedly died under mysterious circumstances. Subsequent owners also lost their kin, until Sir Alan Biverbook decided to donate the so-called “Goddess of Death” to the Royal Scottish Museum in Edinburgh, where it is kept safely under glass. 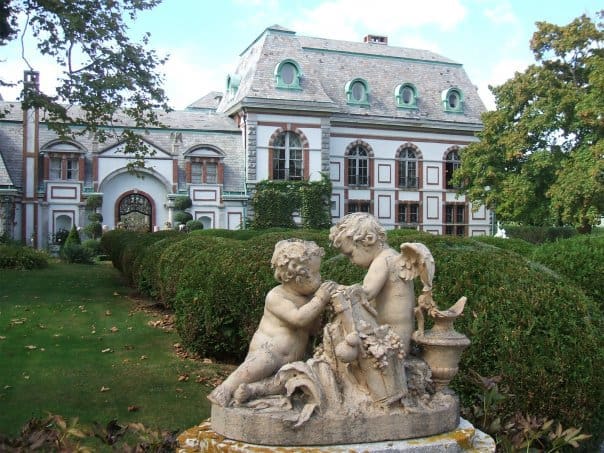 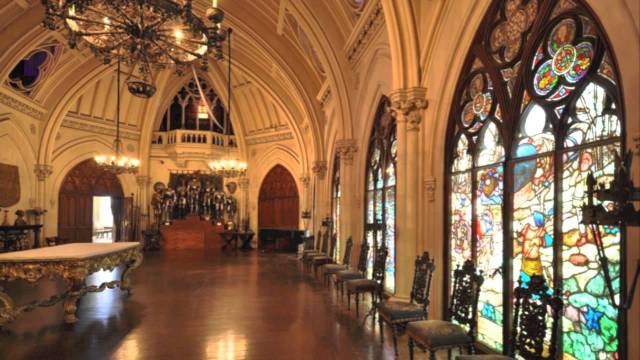 Newport, Rhode Island’s famous Belcourt Castle doesn’t seem to be plagued so much by the ghosts of its former owner, Oliver Hazard Harry Belmont, but rather by the haunted antiques in its collection. Belcourt’s Gothic ballroom is home to a collection of haunted chairs. Those who try to sit in certain chairs report feeling a wave of resistance while other other chairs actually push people out. If hostile chairs weren’t enough, Belcourt also boasts a screaming suit of armor whose original owner was killed when a spear pierced the armor’s eye slit. The ghost of a monk clad in a brown robe has been sighted in the mansion and before Belcourt’s curators banned photography, pictures revealed many spirit orbs floating through the rooms. 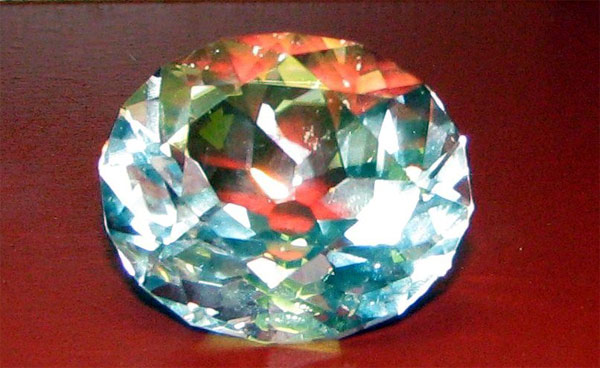 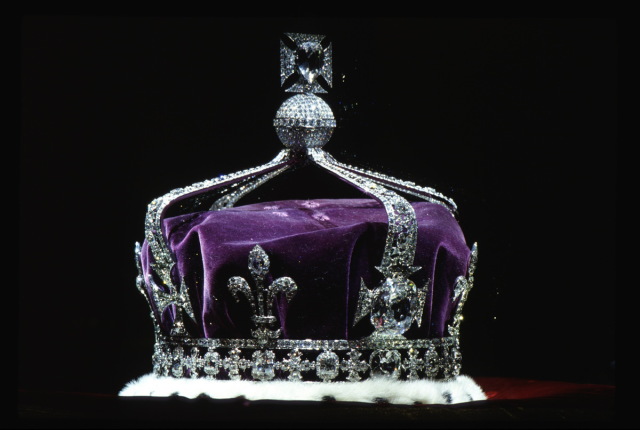 Allegedly stolen from the God Krishna, the Kohinoor (“Mountain of Light”) Diamond boasts an impressive 109 carats and a deadly price for any man who owns it. The Curse dates back to a Hindu text from 1306: “He who owns the diamond will own the world, but will also know all its misfortunes. Only God, or a woman, can wear it with impunity.”

According to lore, the rulers who have owned the KohiNoor diamond lived lives of violence, murder and torture. The British Royal Family has owned the Kohinoor since the reign of Queen Victoria. Wary of the legendary curse, the Royals have always willed the Diamond to the wives of male heirs to the British throne. 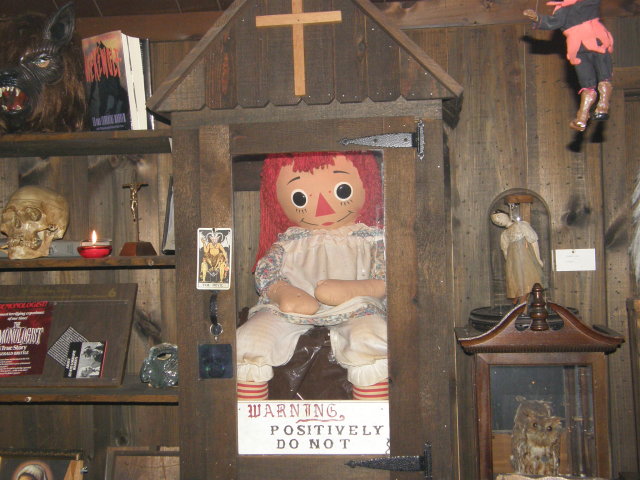 In 1970, a woman purchased a Raggedy Ann doll in a second-hand store as a Christmas present for her daughter, Donna, a nursing student in Hartford, Connecticut. Soon Donna and her roommate, Angie, found the doll standing and kneeling by itself, and fresh droplets of blood seemed to appear on the doll’s body. As the unexplained phenomena increased, Donna consulted a medium, who told her that the doll was possessed by the spirit of a young girl called Annabelle. But Annabelle’s antics became more dangerous, Donna had to call on paranormal investigators Ed and Lorraine Warren who confirmed that a demon, not a young girl possessed Donna’s doll. 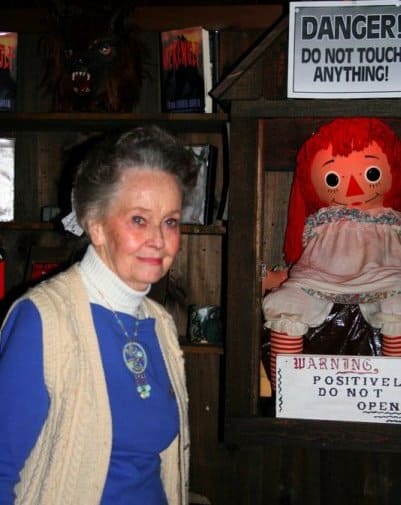 To this day, Annabelle resides in a locked box in Lorraine Warren’s basement museum of cursed objects, where she is blessed twice a month by a priest.

Annabelle (the movie) is now showing in cinemas. Check out our review here, if you dare.

If you’re still lingering around, here’s a bonus: Check out this hell of an Annabelle prank below. The video is in Portuguese, but really, translation is not necessary here. Cruel but totally hilarious… you wouldn’t want to be trapped in that room!