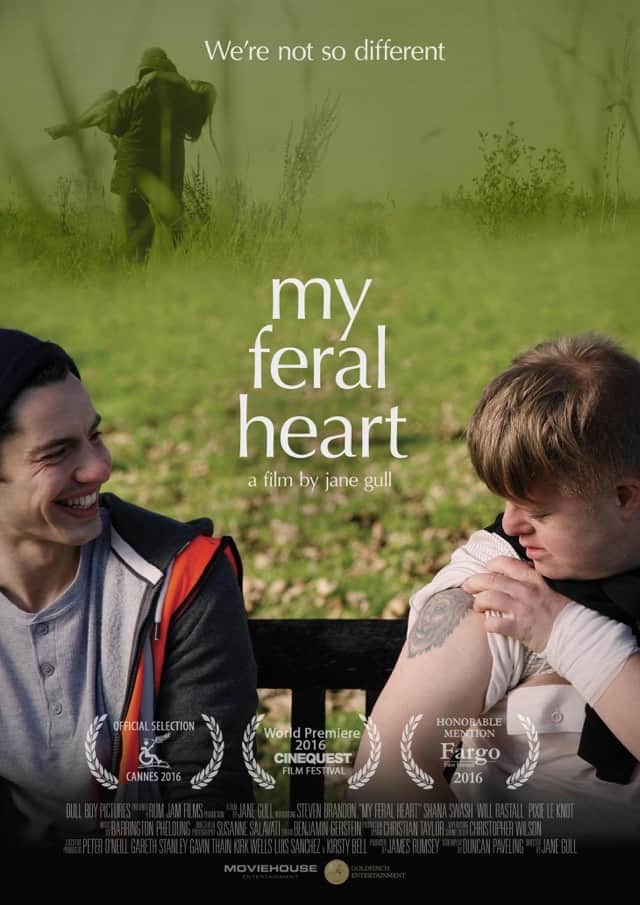 A man with Down’s Syndrome adjusts to an unfamiliar new life and stumbles across a mystery in this indie from the U.K. Luke (Brandon) has been caring for his elderly mother (Pollock), his life thrown into disarray after she dies. He has to move into the group home Blossom House, and despite the best efforts of caretakers Eve (Swash) and Yvonne (Keen), Luke struggles to acclimate, feeling his independence has been taken from him and grieving after the loss of his mother. He eventually befriends Pete (Rastall), a community service labourer repairing the home’s greenhouse. While wandering through the field one day, Luke discovers a seemingly feral young woman (Le Knot), whom he carries to an abandoned barn and nurses back to health. He keeps this a secret from Eve, who doesn’t know where he’s disappeared to.

The warm, beating heart at the centre of this low-key film is Brandon himself. Like the character of Luke, Brandon has Down’s Syndrome; he was discovered through his work as part of the Mushroom Theatre Company, an inclusive dance and drama group that integrates able-bodied performers with children with disabilities and special needs. Screenwriter Duncan Paveling is a professional counsellor who has extensive experience working with special needs children and their families, and a palpable thoughtfulness and sensitivity is evident in his screenplay. First-time feature film director Jane Gull shows admirable restraint, and at no point does it feel like there’s any emotional manipulation of the audience at work.

Unfortunately, the mystery element is what lets My Feral Heart down the most. The premise of Luke coming across this unidentified woman and sneaking away to care for her is intriguing and the interaction between the two characters is tender, with actress/contortionist Le Knot (born Jennifer Keith) bringing great physicality to the part. However, the mystery fails to reach a satisfying conclusion. We understand the desire for ambiguity in storytelling, and perhaps a touch of weirdness without any attempt to make sense of it is just fine, but this reviewer did come away frustrated. It can’t help but come off as a gimmick, that instead of making a straightforward drama about a man with Down’s Syndrome and the people he befriends, a slightly fantastical plot point was needed to hook audiences’ attention.

Brandon’s innate sense of humour and his subtlety as a performer make him an immensely watchable presence. The film wisely avoids the pitfalls of eliciting pity from viewers by presenting them with a disabled person and at no point does Luke feel anything less than a three-dimensional person. Swash, who acted in the U.K. soap East Enders as a teenager, is warm and appealing as Eve, yet never artificially sunny in her disposition. As the ne’er-do-well with a heart of gold, Rastall brings a dash of roguish charm to the proceedings. It is truly heartening how readily Pete accepts and befriends Luke, and while certain misunderstandings arise between the two, their friendship brims with positivity. A moment when Pete recites a dirty limerick to Luke is a little cringe-worthy, though.

My Feral Heart succeeds in that it doesn’t come off as a political statement or an overwrought after-school special, and it would be wonderful if more opportunities for actors with Down’s Syndrome and other disabilities could arise. Attitudes could be changed and stigmas upended if there were more platforms for differently-abled performers to express themselves, which is why the Mushroom Theatre Company and groups like it are so important. If Hollywood movies in which recognisable able-bodied actors attempt to portray characters with disabilities leave a bad taste in your mouth, My Feral Heart is worth seeking out. It’s a pity that the 83-minute film concludes quite abruptly, when there should have been more room for the relationships depicted within to develop and for the mystery to be addressed, if not completely resolved.

Summary: There’s great warmth and authenticity in the performances here, but the initially-intriguing mystery seems to hit a dead end, with the feeling that a rich story has been suddenly truncated.

Visit http://www.sfs.org.sg/event.php?id=568 to learn more about the MINDS Film Festival.