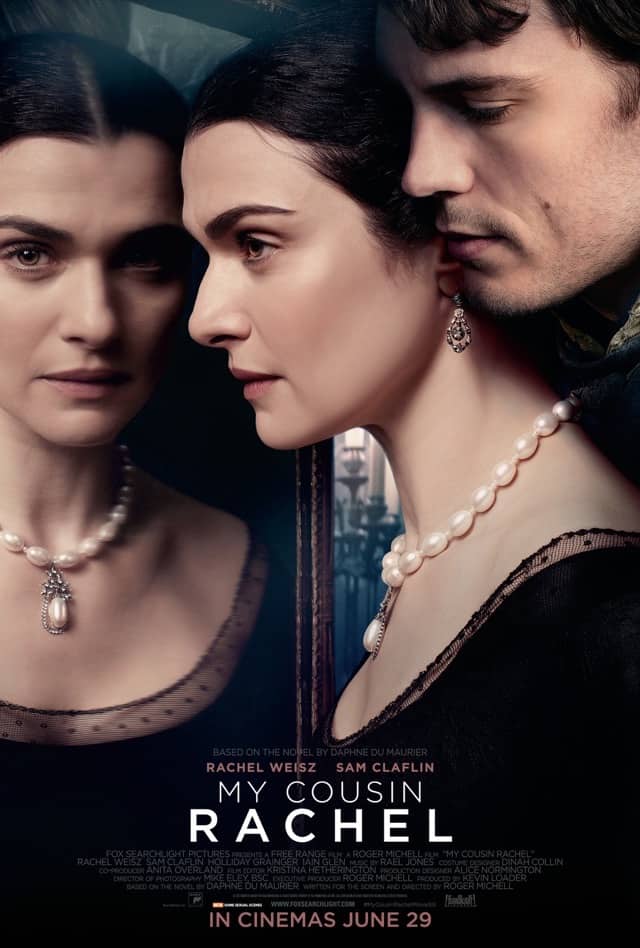 When a character’s name is derived from the actor playing them, it’s known as ‘The Danza’. Take Will Smith as Will Smith in The Fresh Prince of Bel-Air, Tim Allen and Roseanne Barr in their respective sitcoms, and of course Tony Danza, who played ‘Tony’ in Who’s the Boss and Taxi, amongst other things.

In this romantic thriller, Rachel Weisz plays a character named Rachel – but seeing as the source material was written twenty years before Weisz was born, this can be chalked up to kismet. Philip (Claflin) is an orphan whose legal guardian is his godfather Nick (Glen), but who has been cared for by his cousin Ambrose. While in Florence, Ambrose meets a cousin of his and quickly becomes smitten with her. They marry, but Ambrose falls ill and eventually dies. This cousin is named Rachel. Philip is sure that Rachel has killed Ambrose for his fortune, but on meeting her, Philip finds himself unable to resist her wiles. Meanwhile, Nick’s daughter Louise (Grainger) nurses unrequited affection for Philip, and Philip is caught in Rachel’s heady thrall.

My Cousin Rachel is based on the 1951 novel of the same name by Daphne Du Maurier. Du Maurier’s novels Rebecca and Jamaica Inn and her short story The Birds spawned film adaptations directed by Alfred Hitchcock. My Cousin Rachel was first adapted for the screen in 1952, that version directed by Henry Koster and starring Richard Burton and Olivia de Havilland. This new take on My Cousin Rachel is adapted for the screen and written by Roger Michell, famous for helming the considerably sunnier romance Notting Hill.

My Cousin Rachel looks the part of a torrid yet classy affair, thanks to Mike Eley’s lyrical cinematography and the English filming locations of South Devon, Oxfordshire and Surrey. Dinah Collins’ costumes are handsome complements to the picturesque surrounds. However, it seems that the film is slightly too concerned with looking the part, and seems more mannered and stiff than untamed and dangerous. At times, the forbidden romance, the linchpin of the plot, feels ho-hum rather than risky While Michell does stage the proceedings with restraint, the stodginess creates distance between the viewer and the story when this should be beguiling and irresistible.

Weisz is an ideal fit for the titular character, and not just because of her name. She’s able to find the humanity beneath the archetypical Black Widow veil, and her take on the character is far from a laughable caricature. Similarly, the dashing Claflin is believable as a naïve heir who’s either ensnared by a bewitching woman or simply paranoid and delusional. Unfortunately, when the two are put together, the results are lukewarm rather than scorching. Glen delivers a respectable supporting turn, but Grainger remains strictly in the background, when a further exploration of Louise’s feelings for Philip would have made things more interesting.

Playing like a version of Crimson Peak sans the supernatural hijinks and sans Guillermo del Toro’s dark imagination and canny genre references, My Cousin Rachel is skilfully staged but isn’t as viscerally gripping as it should’ve been. Because its central mystery isn’t cleanly resolved, My Cousin Rachel could leave viewers frustrated or haunted. We lean more towards the former.

Summary: Rachel Weisz delivers an electrifying performance but the movie that surrounds her is considerably duller, too mannered and rigid to inspire passion or generate thrills.