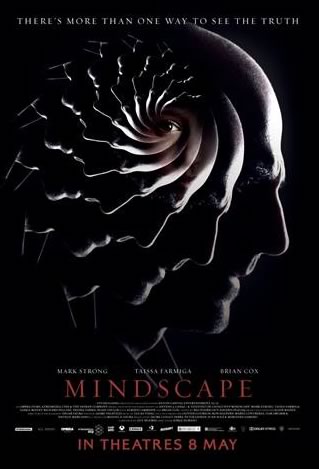 “Journey into the body” movies like Fantastic Voyage and Innerspace can be fun, but it’s often “journey into the mind” films that are truly intriguing and trippy. In this psychological thriller, Mark Strong plays John Washington, a “memory detective” working for the agency Mindscape. He has the ability to take subjects back into their memories and has used this skill to solve several crimes. Reeling from the loss of his wife, he takes a job from Mindscape boss Sebastian (Cox) to help 16-year-old Anna Greene (Farmiga) break her hunger strike. What appears to be a simple job soon becomes unpredictable and dangerous, as John tries to figure out if the girl is a helpless victim or a sociopathic mastermind herself, all while memories of his late wife intrude into his mind.

Mindscape is the feature film debut of director Jorge Dorado and is produced by Jaume Collet-Serra, director of Orphan, Unknown and Non-Stop. Collet-Serra co-founded studio Ombra Films as a platform for promising Spanish directors to make English-language movies, akin to what Luc Besson did for France with his studio EuropaCorp. Also known as Anna, Mindscape aims for a Hitchcockian flavour but comes off feeling more like a 90s erotic/psychological thriller, a tamer Basic Instinct meets The Sixth Sense. If we’re talking more recent films, there’s a tinge of Red Lights and Trance here too. Dorado creates a good deal of atmosphere, but he relies on tried and tested suspense movie tricks such as disorienting editing, recurring visual motifs (clocks, staircases, roses), slow focus pulling, and a score featuring what sounds like the string section of an orchestra having a collective seizure.

Sibling team Guy and Martha Holmes’ screenplay is filled with awkward, clumsy chunks of exposition and some unnatural dialogue, but the set-up does pull one in and the mystery is initially engrossing. As can be expected of this genre, there are several twists and turns and while there isn’t an outright preposterous cop-out, it’s still far from truly satisfying. Still, there is a valiant attempt made at characterisation and like with a good page-turner, this reviewer wanted to keep watching to find out how it all plays out. Films featuring a Lolita figure can end up feeling trashy and exploitative, and Mindscape doesn’t feel too cheap and schlocky in that way.

Mark Strong is one of those actors who gets typecasts as villains in Hollywood films (hence his inclusion in Jaguar’s “Good to be Bad” advertising campaign) but his intensity and presence give him more range that a string of baddie parts suggests. As the “memory detective” plunged into the skeletons-in-closets-filled world of a wealthy and powerful family, Strong’s mix of wariness and vulnerability is quite convincing. The interplay between him and Taissa Farmiga is quite fun to watch. Farmiga bites into her meaty role in an entertaining fashion, her portrayal of the disturbed Anna Greene reminiscent of many a Saoirse Ronan performance. Anna is part Cole Sear, part Catherine Tramell (or is she?) and Farmiga gamely unravels the Gordian knot that is the character before the audience and is mesmerising at it. Brian Cox doesn’t really do much in his supporting role.

Summary: Taissa Farmiga is captivating and Mark Strong plays against her well, but Mindscape feels too much like any number of psychological thrillers even with its sci-fi-tinged setup.