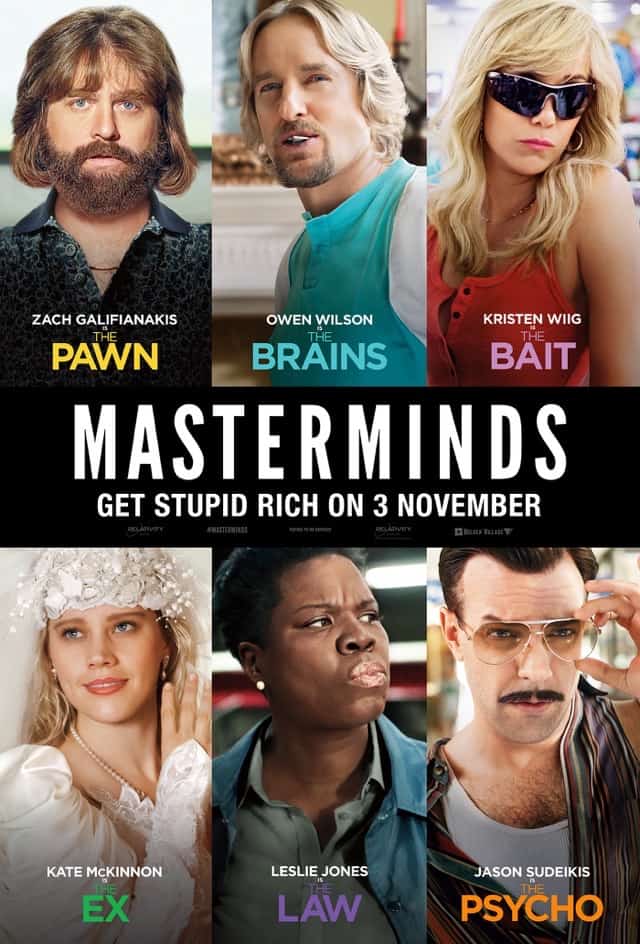 Most movies and TV shows would have you believe that criminals need meticulous, elaborate planning to get away with grand larceny. It turns out that some real-life criminals who weren’t the sharpest knives in the drawer made out with a whole lot of cash. This is their story (with additions in the name of comedic license that we trust are minor in nature).

It is 1997, and David Ghantt (Galifianakis) is an armoured car driver working for cash handling company Loomis Fargo. He is engaged to Jandice (McKinnon), but his true affections lie with his colleague Kelly Campbell (Wiig). When Kelly’s friend Steve Chambers (Wilson) hatches a plot to rob the Loomis Fargo vault, they rope David in to do the actual dirty work of making away with the cash. The robbery is a success and David escapes to Mexico, leaving the bulk of the cash with Steve. However, Steve intends to double-cross David, and hires a hitman named Mike McKinney (Sudeikis) to take care of David. Meanwhile, FBI special agent Scanlon (Jones) is hot on the trail of the thieves. With their extravagant spending, Steve and his wife Michelle (Mary Elizabeth Ellis) aren’t exactly lying low.

Masterminds is, incredibly enough, based on a true story. The perpetrators stole a staggering $17.3 million, approximately $2 million of which is still unaccounted for. The direction taken by director Jared Hess, best known for cult comedy Napoleon Dynamite, is full-tilt silliness. While said silliness does yield some laughs, it also detracts from the ‘this really happened’ quotient, leaving the realm of strange-but-true and entering the land of over-the-top slapstick hijinks. With jokes that seem like they were written in a hurry, set pieces that are big but not overly complicated and an assortment of wigs and goofy facial hair, Masterminds is wont to remind audiences of Saturday Night Live. Most of the cast members are SNL alums, and SNL creator Lorne Michaels is a producer. Like SNL these days, Masterminds is a hit and miss affair.

Hess has wrangled a talented, funny cast. This might not be a highlight of any of their résumés, but because the actors seem to be having a fair amount of fun, the audience does too. David is a standard-issue Galifianakis character: the well-intentioned doofus. There’s more bodily function humour than there needs to be and we get a nigh-inordinate amount of Galifianakis bumping into or dropping things, but Galifianakis is charming enough. Maybe “charming” isn’t the right word, but you catch our drift.

Kelly Chambers seems like a role Jennifer Aniston would be great at playing, which is not a knock on Wiig. Wiig is often cast as awkward, endearing women, and in this film she’s entertainingly brazen and confident. Wilson plays a character with a sinister bent, which is slightly outside his wheelhouse, but not too much is asked of him.

Sudeikis’ inept hitman is a scene-stealer, but one can’t help but think that the filmmakers missed an opportunity here. If it were an actor not known for his comedic chops, perhaps one closely identified with the action/thriller genres, it would be more novel and surprising.

McKinnon’s role is relatively small, but she does provide a healthy number of laughs, playing a somewhat creepy, unbalanced woman. The presence of Jones as a no-nonsense Fed means that three out of four of the reboot Ghostbusters are present and accounted for. Bit of a shame that all three don’t share a scene together, or that Melissa McCarthy doesn’t get a cameo. Ken Marino is at the centre of the film’s most inspired visual gag.

The film was pushed back a year because of Relativity Pictures’ financial woes. Masterminds doesn’t seem like something everyone was clamouring for, but it ends up being inconsequential rather than egregiously bad. This story of working class folk from North Carolina robbing a bank and getting away with it would make for great satire, but Masterminds settles for the most obvious low-hanging fruit at every turn. That’s not to say it’s completely unfunny, but it is unsatisfying. It’s hard to shake the feeling of “is that it?” as the film concludes.

Summary: Even with its funny cast, Masterminds is middling rather than brilliant, passing up incisive social commentary for lazy humour. We will admit to laughing more than a few times, though.